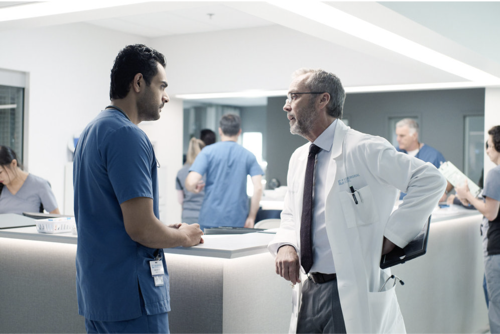 Tonight on NBC the hit Canadian drama Transplant airs with an all-new Tuesday, October 13, 2020, episode and we have your Transplant recap below. In tonight’s Transplant season 1 episode 6, “Trigger Warning,” as per the NBC synopsis, “Bash does his best to celebrate Eid with his sister Amira, but she wishes they could continue the traditions they had back home.

At the hospital, Bash has difficulty respecting a patient’s decision, while Mags tries to gather all the information they need to save a gunshot victim. Theo treats a teenage patient who wants to avoid telling his parents why he’s in the hospital.”

There was an active shooter drill. The hospital held one as a teaching lesson for their residents and it was also a way for them to judge their readiness. No one wanted a shooter to come into the hospital, but they had to be prepared and the doctors needed to show what they’ve learned so far. The residents all handled this lesson differently. They also all failed the lesson. Mags spent too long on a lost cause. She should have let the patient go and focus on the lives she could have said. June pretended like she was an island. She risked her patient by trying to do it all herself and so she should have accepted help from Bash when he offered it.

As for Bash, he too made a critical error. He took too large of a risk to save lives and he also risked his own life in doing so. Bash didn’t prioritize himself. He showed he was prepared to be shot in the course of saving someone and that was scary. There should be some part of him that shies away from suicide. Only Bash didn’t see it that way. Bash didn’t need a drill to know what it was like to live under gunfire and so he knew the patient always come first even if it meant he died in the process. He learned this lesson himself by living in Syria during a civil war. He watched people die and some part of him felt like he could have prevented it. He risked his life countless times to save the ones he could.

It eventually led to him fleeing his homeland because he was considered an enemy by the government. Bash was now living in Canada with his sister and they get to start over. However, the simulation brought back some horrible nightmares for Bash. He remembered the panic and the fear of living in a warzone. It brought back his PTSD. Bash tried to ignore it at first. He treated patients like any other day and yet he couldn’t help noticing that he lost time. Bash lost an hour without anyone realizing what was going on. He was able to cover it up and he secretly saw the therapist at the hospital.

Bash didn’t go to the therapist as himself. He instead claimed that it was his patient who lost his time and so he was told: “his patient” suffered a dissociative episode. The therapist thought the patient would suffer more of these. He warned Bash about it and he also advised that the patient speaks to him himself. Bash said the patient wouldn’t like that. He came up with excuses to put off the therapist and he did his best to ignore the problem. He continued to treat patients. He was treating a young man who had passed out for no reason when he felt himself becoming overwhelmed and he had to take a breather.

Bash returned to his patient. Kevin wanted to know what was wrong with him because he was passing out and vomiting. Bash ran several tests on Kevin. He determined that it wasn’t a stroke and that there didn’t seem to be anything physically wrong with him. He did on the other hand believe there might be a mental issue. Kevin wasn’t speaking to anyone in his family and he desperately wanted there something to be wrong with him. Like maybe his stress would be verified if it was an actual disease. Bash did his best for him while he was on the clock and later he went out for drinks for Theo’s birthday.

Everyone from the hospital went to the party. Mags went from obsessing over her fake patient from the drill to a real patient who discharged herself from the hospital against doctor’s orders. June did her best to be there for her. June even ignored what was going on in her life. She had gotten blood in her eye after an IV came out of a patient’s arm and the patient was a known, drug user. There’s no telling what they had or what they risked passing on to June. Only June wasn’t worried about her own problems. She came to the bar to drink and forget and that’s what she did. It was Mags that struggled to let things go.

Even Bash put what happened at the hospital behind him. He ran into Vivian Barnes there because she was around the hospital so often that she practically works there and the two continued their flirtation from earlier. They were both single. They were both interested and so they went back to her apartment. They weren’t like Dr. Bishop and Nurse Claire. The two had an affair five years ago and they decided to restart things. She still wasn’t going to leave her partner for him, but that didn’t stop them from sleeping together and so onwards the affair went. And by the next morning, they all returned to their professions.

Bash’s patient had gotten worse overnight. Bash ran several more tests and they all came back clean. There was nothing physically wrong with his patient. Bash had been right about it being stress and he had ignored his own instincts because of the lost time. He thought he might have missed something in the time he couldn’t recall. It wasn’t until all the tests came back clean that he realized he should have trusted his own judgment. Mags also came to treat the patient she was worried about. The patient was forced to come back because they needed aide and June was once again there to lend Mags a hand.

Bash in turn was there for June when she got back her test results. It was clear for her and she didn’t have to worry about disease or infection. Then there was Theo. He treated a transgender teenager and it was a first for him. He had never a transgender person before. He didn’t realize how it sounded when he advised Danny not to get growth hormones and it wasn’t until Danny bought testosterone illegally and almost died that Theo realized it wasn’t his place to judge Danny’s actions. He was there to treat him and nothing more. Bash later returned to Kevin’s bedside. He told him that what’s wrong is clinical, not medical and Kevin refused to understand.

Kevin wants there to be something wrong with him. He manifests the symptoms and he refuses help from psychiatrists. Kevin’s reluctance to get help had actually made Bash realize that he needed to stop ignoring his own symptoms.

And unfortunately, this awakening came just as Bash and Amira were kicked out of their apartment.