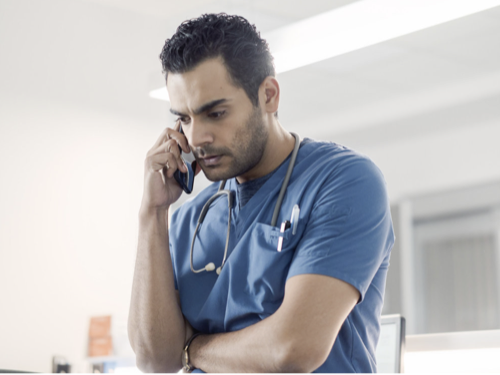 Tonight on NBC the hit Canadian drama Transplant airs with an all-new Tuesday, October 20, 2020, episode and we have your Transplant recap below. In tonight’s Transplant season 1 episode 7, “Far From Home,” as per the NBC synopsis, “Bash wants to make things right with Amira after their lives are turned upside down once again.”

Bash came to be homeless. He tried everything to prevent this situation. He works as a doctor and he receives his paycheck more regularly now than before, but there was a mistake with his latest check. Bash took a pay cut in order to get caught up on his rent and the bank he used came with fees. The fees is what created the problem. There were just so many mysterious fees for this transaction or another that he found himself short in his bank account. He didn’t realize that there was a shortage when he wrote a check for his rent and so the check bounced. And the landlord couldn’t give him an extension because he didn’t own the building and the owner was fed up with Bash’s excuses.

Bash has been in trouble before with his rent. It’s why he thought he was good when he made up for the payments he missed and so now he doesn’t have an apartment nor can he and his sister afford a new place because Bash is currently broke. Bash didn’t know what to do. He thankfully didn’t have to worry about his sister Amira because she can stay with friends while Bash fixes their living situation and that meant only Bash didn’t have a place to sleep. He didn’t want to tell anyone about his current state. He was a little embarrassed and so he threw himself into work. He took extra shifts because that gave him the chance to sleep at the hospital. And Mags pointed out a room he can use that’s nearly empty most of the time.

Mags has gotten to know Bash really well. They were friends as well as coworkers and so she knew something was up. She could tell by the way Bash was missing key details with their patient. Bash was treating an Asian man who came in and didn’t know a word of English. All the patient could say is the word “daughter”. He apparently had his daughter’s name and phone number in his pocket. The doctors were going to call the number. They were also going to treat the patient in the meantime and so why did Mags spot a suspicious rash before Bash did? Bash was typically the first to spot these things. The fact he missed it with the patient had gotten Mags’s attention. She wanted to know what was going on and Bash told her nothing.

Bash was also supposed to be treating another patient. Only this second patient was a white man and he didn’t want Bash treating him because of Bash’s race. Bash could make a complaint. He could have told his supervisors and he chose not to. He simply checked in with his friend Theo who was another doctor at the hospital. Theo told him that he can cover the patient and that was it for Bash. Bash didn’t want anyone else to know and he was still trying to get the bank to back down on their interest fees. He was on a phone call with them when his Asian patient’s daughter came in. the daughter was concerned because she recently spoke to her father and he didn’t say anything was wrong. And so the daughter, Harmony, came in very concerned.

Harmony came rushing in. She asked to see her father and so the doctors were there to guide her, but it turns out she had no clue who the man in the bed was. Harmony said that’s not her dad. She was adopted as a baby and she’s never met her biological nor has she ever sought them out. Harmony believes the man in the bed might be her biological father. The doctors treating him had suggested a DNA test and this test might be very important to the impatient. The elderly man was dying from leukemia. He needed a donor transplant. Mags and Bash even considered he came looking for his biological daughter because she was the only one who can save him. And so when Harmony asked about her bio dad’s condition, Mags told her the truth.

Mags told her that she can help save him. She didn’t get the patient’s consent to seek this situation with his daughter and Bash wasn’t on her side. He thinks they should wait for the interpreter. The interpreter could tell them what it is the patient wants. They can also be given a name and so Bash didn’t want Mags rushing into anything. Bash also was caught up in his own drama. He couldn’t work out an agreement with his bank and he couldn’t talk to his mentor Dr. Bishop because Bishop was too worried about a meeting with his estranged son. And so Bash had no one to talk to. He tried telling Amira maybe it would be best if she stayed with her friend and Amira told him that she didn’t want to move without him.

Amira wanted to go with her brother. She didn’t want to leave him behind and so Bash continued to look for a solution. Bash wasn’t the only one missing things as a doctor because of a personal issue. June was another resident at the hospital and she almost missed spotting a burst appendix. Her patient has a rare condition that means she can’t feel pain. She can’t sweat or know when her body is in trouble and she came in vomiting. It took the patient’s overbearing mother to help June figure out what was wrong with the patient. She then rushed her to the OR and she was treating her as the interpreter finally arrived for Bash’s case. Bash learned that his patient’s name is Mr. Chao. Chao knew about his cancer.

He traveled anyway because he wanted to see his daughter. He wanted to tell her that she was wanted and that they tried to keep her, but the one-child policy worked against them and they were reported by their neighbor. The police ended up taking baby Harmony while Chao was at work. He came back home to find his wife and son in tears. They grieved for their daughter and they told themselves that she has a better life now. Chao’s wife later died and so he went looking for Harmony. He didn’t look for her as a potential donor. He just wanted to meet her and tell her she was loved. Chao’s story was a sad one and his doctors felt for him. Bash also let it slip to Mags that he was looking for a new place.

Bash didn’t tell Mags this so that she can fix it for him. Only Mags being Mags she found a solution. She told Theo and Theo suggested to Bash that they temporarily move in with him. Theo lives in a two-bedroom. His wife was finished visiting him and he wasn’t expecting a visit from his daughters anytime soon. Theo also spent some time with Bash’s racist patient from earlier and he realized he wanted to be nothing like that guy. So, he offered his place. Bash agrees to temporarily stay there while he kept looking for a new place and he later thanked Mags for her help. The doctors had treated Chao to the best of their ability and he was going to get a transplant from his daughter who agreed to help him after she heard his story.

And June ended up wanting to take the next step with her security guard boyfriend, so they agreed she can meet his son.