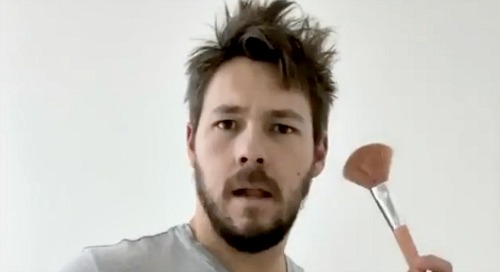 The Bold and the Beautiful (B&B) spoilers has some fun news to pass on about a couple of soap stars, including B&B’s Scott Clifton (Liam Spencer) and Y&R’s Christian LeBlanc (Michael Baldwin). It all started when the gorgeous ladies of B&B participated in the “Don’t Rush” challenge, which features groups of friends who transform in the stroke of a makeup brush from ordinary to glam.

The ladies of B&B recently posted their “Don’t Rush” video complication on their social media platforms. Fans loved it, as they got to see all the B&B ladies having fun and transforming into glam versions of themselves in the blink of an eye. The soundtrack was even a whimsical version of the B&B theme song. It was pretty great.

Well, it wasn’t long before Scott Clifton decided he wanted to get in on the action. Using a pink makeup brush that he most likely borrowed from his wife, Scott reenacted what each of the ladies did in the original video.

In the parody, Scott tried multiple times to get the transformation to work, but instead of transforming into “glam,” his ordinary look remained.

You can watch Scott’s video below – it’s well worth a watch, as he complains to someone on the phone about the “magic” not working. The person on the other end then tells Scott to “turn it off, then back on again,” and hilarity ensues. Scott’s caption for the video reads: “The Bold and the Bumbling.”

Scott’s video has garnered quite a few comments from his castmates. Jacqueline MacInnes Wood (Steffy Forrester), who was featured in the original video, commented: “HAHAHHAA can I just put you in drag? Heeeennnnayyyyy!”

Well, it wasn’t long after that Christian LeBlanc got in on the action, posting his own parody of the B&B ladies’ “Don’t Rush” challenge. In Christian’s video, he drinks coffee from a Crimson Lights mug and attempts the challenge, but it doesn’t work for him, either. At the end, Christian humorously hangs his head and exits the screen.

Christian got his share of comments on his performance as well. Jennifer Gareis (Donna Logan, B&B) responded with: “You are too cute!” And Tracey E. Bregman (Lauren Baldwin, Y&R) commented: “Love and miss you!!”

If you get a chance, check out the videos below. They’re in good fun, and it’s great to see the cast interacting on social media during this time of quarantine. Did you enjoy the B&B ladies’ “Don’t Rush” challenge and the parody videos? Stay tuned to B&B and keep CDL bookmarked for the all the hot new Bold and the Beautiful spoilers, updates, and news.