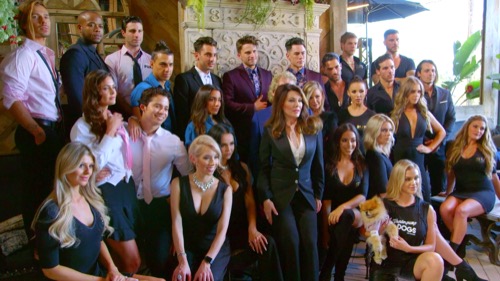 But relationships are tested when Kristen confronts Katie and Stassi for abandoning her, and Jax and Sandoval face off over the future of their friendship.”

Brett tells Scheana that she seems to hate him alongside Max. Dayna joins the conversation. She didn’t appreciate Scheana defending Max.

Lisa sits with Tom Schwartz and Max to discuss their upcoming magazine spread. Tom Sandoval and Ariana’s head to get a spray tan. They talk about Jax and Brittany and the pool party fight. Lisa also wants to hear the details from Tom Schwartz and Max.

Ariana and Tom talk about how Stassi made jokes about how they do not have furniture. Over at Lala’s, Stassi, Brittany, and Kate arrive at all eat and hang out. Brittany and Kate finally air out their issues.

Stassi and Beau go house hunting. They see a great house but want to keep looking. Meanwhile, Lisa, her husband, and the two Toms look at what the gardens would look like in TomTom if they expanded.

Both Toms decide they are in on expanding. Lisa is thrilled. Later, the gang all shows up for the Hollywood Reporter spread. Ariana and Jax talk about the pool party. Jax tells her he has made mistakes. Ariana wants him to not talk about her and her house and what goes on there. She walks off to get a drink.

Max talks with Brett. Max tells him he still has fresh wounds about Dayna. The gang all gets together for their group photo. Jax isn’t wearing a Sur shirt. Lisa tells him he needs one. After he complains that he needs to wear one they take the picture. After, Jax is snippy and moody.

Jax and Lisa sit and talk. He tells her about his anger issues. He doesn’t know how to fix it. Lisa tells him he has to because now it involves Brittany.

They all head to TomTom for the one-year anniversary party. Max and Karrah flirt at the bar while Kate tells Stassi that Kristen is coming with Carter.

Ariana confronts Stassi about the furniture in her house. Stassi calls Scheana over to confront her for telling Ariana something she didn’t say. Karrah is drunk and involves herself in the conversation. Danica gets mad and fights with Karrah. Lisa tells her to go home.

Randall arrives. James apologizes to him for their past and all of the problems. Randall accepts his apology. Raquel tells him she is so proud and attracted to him right now.

Tom and Tom pose for pics. Meanwhile, Max and Dayna sit and talk about why he is mad at her. He tells her he is good with her after the fight at the restaurant. She has kissed Brett and he has slept with 5 women since their break-up, she tells him. He doesn’t care and doesn’t want to talk. He gets up and leaves.

Lisa makes a speech about the last year and how everyone has grown. She toasts to new beginnings. Jax and Brittany make-up with Tom Sandoval after he and Jax get into it.

Meanwhile, across the room, Kristen approaches Kate and Stassi and tells them she has been sad all summer. Stassi tells her she has a victim mentality.

Jax tells Tom he doesn’t know what to do. He cannot help it. Stassi tells Kristen she is done. Jax proposes a break for a bit. They both agree. Lisa intervenes and talks with Jax. She tells him to pull it together and go see someone.