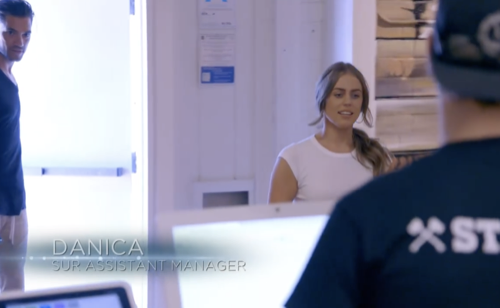 Tonight on Bravo Vanderpump Rules returns with an all-new Monday, April 7, 2020, season 8 episode 13 called, “Shame Hangover” and we have your weekly Vanderpump Rules recap below. On tonight’s Vanderpump Rules season 7 episode 2, as per the Bravo TV synopsis, “Stassi and Ariana put their rivalry aside to throw an epic winter-themed birthday party, but Stassi’s new boyfriend Beau gets his first taste of Stassi’s famously bad birthday behavior.

Jax confronts Tom Sandoval for questioning his engagement to Brittany, while Scheana finds herself attracted to her “best friend” Adam Spott. James Kennedy finds himself cut off from everyone at SUR, but Lisa vows not to give up on her former DJ.”

Max and Tom are at the skate park. Tom is starting to think they’re a little too old for this stuff after he falls and hits his knee hard. They take a break and just talk instead of skating.

James, Racquel, Ariana, and Dayna decide that they are going to try ax throwing. Brett arrives. He and Dayna start to talk, he mentions how he thinks they need to hang out more outside of work and the few other places they end up at together.

At Sur, Lisa is feeling down. She needs to pull her self together and go to London for her mother’s funeral. She’s also upset because Danica screwed up two tables the other night. She calls her over and they talk. Lisa points out several times that Danica has had a bad attitude. She tells her to soften it up.

Tom comes home to ice his knee. He and Kate get to talking about their fight. He apologizes to her he doesn’t even know why he got so mad.

Kristen, Kate, and Stassi all meet for lunch. Meanwhile, Dayna and Brett meet for a drink. They talk about dating. Brett has only had one serious relationship in his life and he is looking for something where he doesn’t feel like he is in the back seat. They move on to talking about Dayna’s mother and she begins to cry.

Keaton tom goes to visit Beau. They look at rings he is been shopping for. He loves Stasi and knows that he wants to marry her and he wants everything to be perfect.

Kristen calls Scheana. She’s mad because she heard that Tom and Kate are going to redo their wedding in Vegas and she wasn’t invited.

Britney is back at Sir and she’s excited. She wants to get back to work so that she can contribute half to her household. Meanwhile, Scheana feels terrible due to her fertility treatments. Dayna comes up to her and starts talking about Brett. She just wants to be upfront about Brett so that Scheana won’t ruin her life.

Dayna meets with the girls to the sun and eat. She tells them about Brett and how she let Scheana know. She tells the girls that she thinks she likes Brett. But now she’s a little worried because her birthday party is tomorrow night and Max is going.

Stassi and Beau head out to dinner. They start to talk about the other night and how they were fighting as well as Tom and Katie. The whole thing was a mess. They start to fight about getting engaged and having a wedding. He asks her to relax a little, he loves her and he doesn’t want to talk about it anymore. She doesn’t want to eat anymore and he just wants to have a great night.

Everyone is at Dayna’s birthday. Lisa arrives. She doesn’t normally go to the birthday parties of staff but she really likes Dayna. Meanwhile, Kristen confronts Katie about Las Vegas and begins to cry. Katie tells her that they just need a break from one another and just her family is going.

Dayna hears that Scheana has been talking about her and Brett, concerned for Max. Dayna confronts Scheana. She doesn’t need the drama at her party and Max doesn’t get a vote when it comes to who she talks to.

Scheana cries. She is upset. She is 34 and single, divorced and trying to have a baby alone. Brett and Lisa are talking. He is flirting heavily with her. She gives him butterflies.

Dayna has cake shoved in her face after everyone sings Happy birthday! She kisses Brett after.