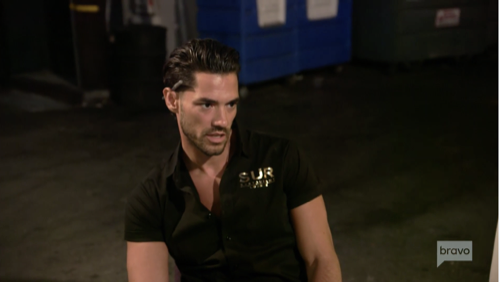 Finally, Danica and the SUR staff go head to head with Sandoval, Schwartz, and the team from TomTom during an epic softball game to determine restaurant dominance, ending with James giving Katie the apology she’s always wanted.”

After the wine party, Stassi arrives home and apologizes to Beau. She brings macaroni and cheese. At Sur, everyone is excited about their planned softball game. Meanwhile, Ariana is playing for team TomTom even though she works for Sur. James arrives to meet Tom, Schwartz, and Ariana. They play softball outside. James shares that he hasn’t been drinking at all.

Stassi and Beau go cemetery plot shopping. Beau is going to propose to her there. They make their way near a lake there when he pops the question. She is in shock. She says yes and has to sit. She loves the ring. He tells her they are headed to Lisa’s who has offered to throw a party fo them. They call Kate and Tom to share the news.

At Lisa’s, Lala and Kate arrive and share what happened between Kristen and Stassi last night. They don’t want her to come to the party because it would be bad. Meanwhile, Kristen already saw that they got engaged on social media. Lala calls Kristen and they end up fighting.

Carter texts Beau to thank Kristen for hooking him and Stassi up. Stassi and Beau get irritated. Meanwhile, at Lisa’s, some of the gang are starving because Schwartz told them he was cooking for all of them.

Stassi and Beau arrive. She is surprised by her family who Lisa invited. She hugs everyone and shows off her ring.