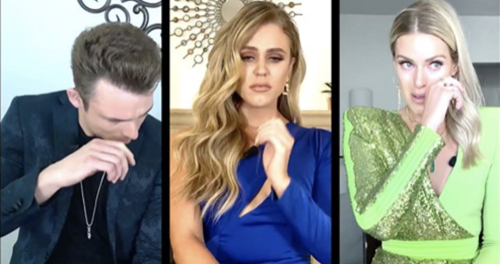 Part Three of the Reunion. Andy Cohen has been talking to the cast and crew of “Vanderpump Rules” about the latest season of their hit show. He even addressed the Stassi engagement drama. All season long Stassi was pressuring her boyfriend to propose. She ultimately succeeded when Beau asked her to marry him, but it came after weeks if not months of drama and frustration. Stassi was desperate to get married. She pushed and pushed and she finally won. Stassi is now engaged. She couldn’t wait for her wedding and so this season has been a little embarrassing for her. She hated looking back and seeing how desperate she was. And so now she’s learning to laugh about it.

This season has been full of ups and downs. The one Lisa best remembers when she had to manage the managers. Lisa usually worries about the bartenders and the waitresses. The managers tended not to be a problem, but for some reason, they were this season. Danica put her hands on a member of staff. She also got into frequent fights with Max about his dating habits and so Lisa had to step in at one point. Lisa had to suspend Danica. She had no other choice and she later felt hurt when Lisa accused her of being too attached to a member of staff. Lisa is a married woman. She’s also a mother and her family were hurt by the accusations of impropriety.

Danica apologized for what she said earlier. She said she never meant to hurt anyone and so Kristen told her she was lucky to still have a job. All Kristen did to get fired was tell a manager to go suck a d*ck. Kristen, therefore, knows that Danica was given extra chances than she had and she warned Danica about using them up. There’s been plenty of drama this season. There was that thing with Brett and Scheana. Scheana had admitted she found Brett attractive. She told Lisa she wasn’t going on those feelings and that she just wanted to be his friend, but then she got crazy jealous when he went out on a date with Charli and so Charli took herself out of the equation.

Charli had considered Scheana a friend. She hadn’t wanted to ruin that friendship and so she didn’t pursue a relationship with Brett. Brett was asked if he wanted to apologize to Scheana for saying one thing to her face and another behind her back, but he refused to do it. He doesn’t believe he did that to Scheana. He thinks he’s a better person than that and so he refused to take responsibility. Another person who did that was Jax. Jax told everyone he was a work in progress and he’s been doing that for years now. He doesn’t take responsibility. He keeps making excuses and so Tom and Ariana got fed up with him.

Ariana battled depression this season. She’s doing better now because she found a therapist she can talk to and she’ll always have Lisa in her corner, but Jax was a different story. Jax would go crazy and have these moments every season in which he lashes out at the people who love him. He did that to Brittany. He took out his frustrations on her and she just had to deal with it. Brittany married him knowing this was the kind of man he was. She couldn’t regret her decisions now. She instead lashed out at her friends and so the anger and the confusion trickled down into every relationship. And everyone rightly blamed Jax for it.

Jax hadn’t wanted to hear it from certain people. He did confess to having mental health problems at the end of the season and he was okay with Stassi when she brought it up so that they could talk it through. But he didn’t want to hear from Ariana. Ariana wanted him to see a therapist or at least look for some kind of help and Jax wasn’t doing so. He wasn’t being proactive. He had his problems and at the same time, he didn’t want to seek help for it. Jax was his own worst enemy in that sense. He was the one stopping himself from getting better and becoming a new person. Jax didn’t want to change. He wanted to keep being a jerk and his friends were tired of it.

They wanted to see some sign that he understood he couldn’t keep treating people this way. Only Jax still refuses to see there’s a problem, to begin with, and so everyone got tired calling him out on crap he couldn’t see. They next talked about Dayna. Dayna was thrown when her good friend Scheana brought in a psychic because it brought up some stuff from her past. Dayna had lost her mother at a young age. She doesn’t talk to her father and so for a while, it was just her and her sister. Dayna had to be tough because of it. She had to be an adult and she does sometimes wonder what her mother would say about it. And so the psychic thing really hurt her.

Jax lost his parents. His father died and he stopped communicating with his mother. He told Dayna how he understood her situation. He said its been hard getting updates on his mom because his sister doesn’t really talk to the mother either and so his friend suggested he reach out to his mom. This pandemic has changed everything. People really should jump on every chance they have now and that goes for both Jax and Dayna. Dayna was involved in further drama when she became involved in a love triangle. She was with Max and the relationship failed. She tried moving on with Brett, but then Max got super jealous. And so that was a thing.

James also apologized to Lala’s man. He had insulted for most of the season and then he apologized for his crappy behavior. He also did so again tonight. James and Lala are in a better place because of it and they’re back to being friends.

Also, the most important thing to take away from tonight is that the cast misses each other. This whole social distancing thing has put a strain on their many relationships and they miss each other so much that seeing each other now has helped.