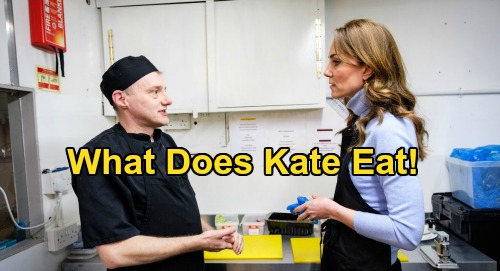 Kate Middleton’s diet may not be what you’d at first expect according to insider sources. Although it’s easy to assume that The Duchess of Cambridge might prefer ultra-fancy gourmet meals served up on a regular basis, it seems that she prefers to keep things rather basic.

According to sources, Kate Middleton tends to follow a high-protein, low-carb diet, with a regular rotation of seafood in her lunch and dinner entrees. It’s fairly well-known that Kate has an active lifestyle and enjoys participating in sports with Prince William, and it seems that her food choices nicely compliment that lifestyle.

For breakfast, it’s reported that Kate likes smoothies that are loaded with healthy, high-energy ingredients such as spinach, spirulina, and blueberries. Then, at lunch, Kate prefers dishes such as salads, seasonal fruit, and things like tabbouleh and gazpacho.

Kate Middleton is also said to enjoy cooking – something that she may be doing much more of now that she has been in lockdown during the coronavirus pandemic. She is known to cook up a mean roast chicken for her family at times.

But what about favorite foods? Well, one thing that Prince William once revealed during a royal visit to Japan House London was that both he and Kate enjoy sushi. Kate is also a fan of lamb and chose to have lamb as one of the entrees served at her wedding to Prince William.

And as far as snacking goes, William and Kate were seen sharing a bucket of popcorn back in 2014 when they visited the US and attended a basketball game in New York. Kate was spotted reaching into the popcorn bag several times throughout the course of the game.

Others have maintained that Kate Middleton enjoys vegetarian food, and that when she’s on tour she often chooses plant-based foods such as curry. According to sources, a chef who prepared the menu for William and Kate’s Taj Mahal visit said that he was instructed to keep the menu vegetarian for the couple.

At any rate, it seems that Kate enjoys mixing up her diet within some general guidelines, and that she allows herself some indulgences here and there as well. Be sure to check back with us here at CDL for more British royals updates and news.