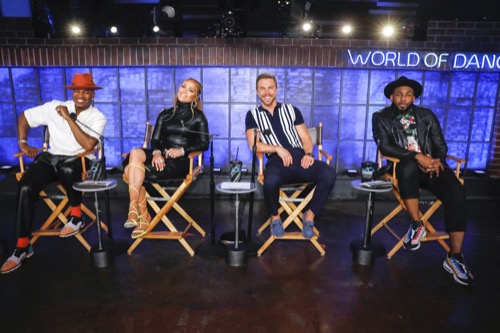 Tonight on NBC the World of Dance’s the fourth season airs with judges Jennifer Lopez, Derek Hough and Ne-Yo with an all-new Tuesday, July 14, 2020, episode and we have your World of Dance recap below. On tonight’s Word of Dance season 4 episode 7 “The Duels 2,” as per the NBC synopsis, “The Duels” round continues with judges Jennifer Lopez, Derek Hough, NE-YO and special guest judge dancer and choreographer tWitch.

This season, the judges have chosen which acts go head-to-head and acts won’t know their opponent until they hit the dance floor, leading to some of the most epic dance battles the series has ever seen.”

The duels continue. Duels are the last chance to get to the main world event stage. The contestants don’t know who they’re dueling until they walk through the doors and so each and every moment they had to be prepared to dance for their life. Tonight they wrapped up the Upper Division duels. The judges were Jennifer Lopez, Ne-Yo, Derek Hough, and guest judge Twitch. Twitch shot to fame on “So You Think You Can Dance” as a contestant and an eventual coach. He was therefore right up there with the experts. Twitch also took the time to offer up some comforting words. He’s been where they are and he knew just what to say.

Up first for the duels was Jake and Chau vs Josh and Erica. Jake and Chau were a Contemporary duo. They were strong athletes and they displayed hat strength as they went first in the duels. The judges came to really love this duo. They loved the choreography as well as the talent that went into their dance tonight. They also noted the one mistake. Ne-Yo said he regretted how he had to judge their mistakes but he was a coach and this is what he does. He also said he enjoyed the performance right up until then and he like the others couldn’t wait to see what Josh and Erica offered up in retaliation.

Josh and Erica were another duos. Their style was a little more eclectic because there were signs from Contemporary and other signs from Hip Hop. So, they combined styles again for their performance tonight. They had the judges a little concerned when they clipped themselves together and they had a strap connecting them at all times. They gave a very moving performance and so leave it to Ne-Yo to once again find a problem with their dance. He was later told the duo where they went wrong when Derek cut in. Derek had enjoyed the performance. He thought it stood out because it was so unique and Jennifer agreed with him.

It was Twitch who played peacemaker. He held the two performances up against each other and he thought both of them were very commendable, but there could only be one winner in this duel and so the judges got to voting. Only three of the judges could vote. Derek went first. He decided to go with Josh and Erica. Jennifer went next. She decided to go with Jack and Chau. Ne-Yo went last. He was the tie-breaker and he ultimately chose the winner. He later named Jake and Chau as the winner of this first duel. And he also told Josh and Erica that they still had a chance thanks to the redemption round.

Next up was the dance groups. It was Geometrie Variable vs Oxygen. Geometrie has the ability to draw you in with their artistry and they were up against Oxygen who were known for their visual effects. These two groups were equal to each other and so it was a worthy battle. Geometrie went first. They danced beautifully and they showcased new moves that took the judges by surprise. Ne-Yo went looking for something wrong with their routine and he told them he couldn’t find it. He said they were flawless and the other judges agreed. The judges even said they were proud to be dancers because Geometrie Variable has inspired them.

Oxygen went second and, boy, did they have a lot to live up to. They switched it up this time. They didn’t include the Shiva move and that had left Ne-Yo a little disappointed with their dance. He said they lost some of their characters. The other judges said sorta the same thing. They thought the group lost some of their magic. They liked a few things about the routine, but they were overall disappointed in this performance because it hadn’t topped the first one for them. It was only Twitch who enjoyed this second performance. He hadn’t been there for the first one and so he was able to judge their performance tonight on its own. And he enjoyed it.

Twitch wasn’t one of the voting judges. He was left out of the process and so it was Jennifer, Derek, and Ne-Yo who all voted for Geometrie Variable. They enjoyed Geometrie’s performance more. They also liked how the group kept their identity throughout the competition. Now, Oxygen still had one more shot. The duels were over and now there was just the Redemption left. The Redemption was the last chance for one group to still make it through. It also all depended on Twitch. Twitch had to go backstage and he had to pick two groups to go up against each other again. He had to cautiously make a chance based on what he saw so far. And he later picked Oxygen vs Styles and Emma.

One was a dance duo. The other was a dance group. Both teams had different styles and so it was a lot easier to stand out based on their own unique skill set. Styles and Emma went first with their performance. They blew everyone away with what they pulled off. They danced amazingly together and this performance was actually stronger than their previous one. Styles and Emma were completely different Oxygen. Oxygen came back stronger than before with their second performance tonight. It was better than what they did when they were up against Geometrie and that made the decision hard for the judges.

The judges loved both performances. It was hard on them to make a choice between the two different groups and so the judges held an impromptu meeting. They huddled together and discussed what they thought of both dances. They later came to a unanimous decision. They decided on keeping Oxygen and so once again Styles and Emma were eliminated.

And up next will be the duels for the Juniors Division.