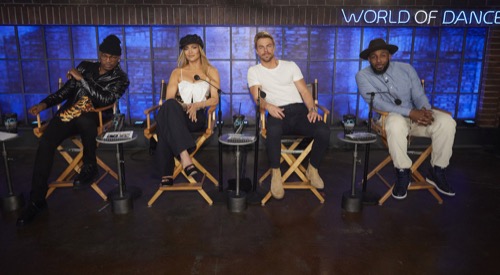 Tonight on NBC the World of Dance’s the fourth season airs with judges Jennifer Lopez, Derek Hough and Ne-Yo with an all-new Tuesday, August 4, 2020, episode and we have your World of Dance recap below. On tonight’s Word of Dance season 4 episode 10 “The Semi-Finals 1,” as per the NBC synopsis, “Six of the top 12 acts take to the “World of Dance” stage for the first time this season; the judges score each performance based on artistry, technique, choreography, creativity, and presentation; the top two scoring acts move on to the world final.”

It’s the Semi-Finals, the acts need to give the judges something they have never seen before and the arena needs to go nuts. This is big-time stuff, they need to bring it. This is for a million dollars.

The Young Cast are first to perform, they are warriors and need to find that last ingredient to make them a champion group.

Judges Comments: Derek: “That was a fantastic performance. A really great way to open this show. You are a perfect example of perseverance. Even before this season, you tried out for World of Dance and kept coming back. Congratulations on making it to this point. A lot of energy, I love the outfits, the roll-offs, great job. I loved it.” Jennifer: “I totally agree, it was a perfect song selection, the way you cut the music, everything made it so dynamic. For me, there were so many things going on sometimes that I didn’t know where to look, other than that, perfect performance.” Ne-Yo: “If I could critique anything at all, there was some musicality missed for me. But other than that, flawless, great job.”

Savannah Manzel is nine years old, a child prodigy. The story of this performance is following your dreams.

Judges Comments: Jennifer: “Savannah you are a marvel, we have seen a lot of contemporary, and balletic acts and acrobatics up there, but you were putting a new spin on every single move I have ever seen.” Derek: “You are one of the most technically sound dancers we have on the show this season and you are nine years old, it is extraordinary. How long have you done ariel? (she says one week)” Ne-Yo: “I am so proud and excited for the next generation of dance because of little girls like you.”

Jefferson & Adrianita have amazing moves that Derek has not seen before and they named their kid after him. They have prepared their whole lives for this moment.

Judges Comments: Ne-Yo: “You cannot deny the electricity that just flowed through this whole room. The only thing that I could critique Jefferson is that I can see your effort in some of the lifts.” Jennifer: “I was just thinking that the kiss, in the beginning, was like please don’t drop me, and the kiss at the end is thank you for not dropping me. I found that Jefferson was really in step. The footwork was amazing, top-notch.” Derek: “I think that is a sign of a great partner. I loved seeing the tricks, some I haven’t seen before.”

Next up is GRVMNT, they have that chemistry, they work hard and they become one.

Judges Comments: Derek: “I love the whole concept, I love the look. It was off the charts, fantastic. My one critique, you stayed in the V formation too long.” Jennifer: “The execution as great, but for me, some of the steps lack originality and that worries me for you guys.: Ne-Yo: “I have to agree, but you danced it.”

Kurtis Sprung went through a lot as a kid and didn’t trust himself as a dancer and wants to show the world what he can do now. This piece is about his relationship with his father.

Judges Comments: Derek: “The lyrics hit me, your athleticism, your technique, there were times when I actually thought you were going to fall over because you were hitting it so hard, so recklessly, thank you for sharing that piece with all of us.” Ne-Yo: “Here is my one and the only critique, I was waiting for a pause and picture, but it just kept going.” Jennifer: “I am going to disagree with you Ne-Yo I thought there were beautiful pictures there and amazing moments. There were moments where you hung in the balance and where you flew in the air. This for you was about a lot of things, but for everyone else, it meant something different and that is a testament to your artistry.”

The last performance is by Geometrie Variable, which has taken a nuance and created a whole style.

Judges Comments: Derek: “First of all, I could not walk out and be that cool ever. It was so surgical, every move was intentional. You went chill, you went swag and you went flawless.” Jennifer: “You are oddly satisfying somehow you made all this sexy. Every time we see these guys the question is what are these going to do because they have a specific style. You make every time you come out here exciting and I enjoyed this routine.” Ne-Yo: “It was great, you guys danced with one brain. You are so synchronized it is amazing, it is dope.”

Jefferson & Adrianita are in the first place, Geometrie Variable is in second place.

Both groups have made it to the finals.