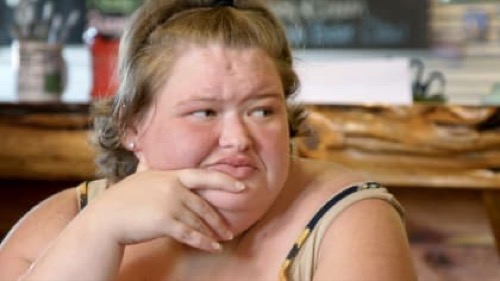 Tonight on TLC their fan-favorite series 1000-lb Sisters airs with an all-new Monday, February 1, 2021, Season 2 Episode 5 and we have your 1000-lb Sisters recap below. On tonight’s 1000-lb Sisters season, 2 episodes 5 called “Dropping Bomb,” as per the TLC synopsis, “Tammy’s new doctor gives her what feels like an insurmountable weight goal, but it’s not the only challenge she’s facing. Amy and Michael drop a bomb that changes everything.”

In tonight’s office Tammy gained fifty pounds in one month, Chris says she is literally going to eat herself to death if she doesn’t stop. She says she doesn’t know how she put on the weight. Her doctor says she needs to make progress. Dr. Eric Smith says the last time Tammy weighed 595 pounds and today she weighed in on 644 pounds. He says their first goal is to get at least 100 pounds off her. If they do not reach that they can’t move forward with surgery. Chris is a candidate to have the surgery and he wants him to lose 30 pounds.

He says they have to reduce their weight more importantly, to show him that you can do what he needs them to do after surgery. Tammy knows she has do something, she doesn’t want to be bed bound. Tammy tells Dr. Smith she can do it. Chris says he will help her as much as he can, but he needs the effort back from her. Tammy says she will try.

Michael and Amy are home, they go to see Amy. Tammy tells them that she has to lose 100 pounds, Chris 15. And, she confesses that she gained 50 pounds. Amy doesn’t want to argue with Tammy but she can’t believe that gained 50 pounds in one month. Amy asks her how she is going to lose 100 pounds. Amy says she is worried, because the baby is going to be there soon and she won’t be able to come over as much. Amy suggest a meal delivery service, or she start cooking for herself.

Chris says that when Tammy weight in at 644, he almost lost it. Chris visits with Amy, he wants them to work together to come up with a creative idea for Tammy to lose weight. Michael tells her that he didn’t even think someone could gain 50 pounds in a month. Amy feels like they are stuck, Tammy doesn’t know how to control her portions.

Michael says if she gets to the point that she can’t get around it is going to be like having a very large family. Amy doesn’t want Tammy going back to a home, but she has tried so hard to help her. Michael says they can’t lose faith, they have to support her as much as they can and if she fails, it will be her fault and not theirs. Amy doesn’t want to bury her sister, but it comes down to that she might have to do that. Amy feels that she is stressed out all the time and needs to separate herself from this situation.

Amy comes up with an idea, have a meet a greet to cheer Tammy up. Last year they had one and it was successful. It is a way to release stress and keep Tammy motivated. Because of COVITD, it has to be virtual. Amy is hoping that Tammy’s YouTube followers will give her some support.

Amy and Michael are going house hunting, and she is not telling Tammy until they make a decision because they don’t want to worry her. Amy is excited about the house they go see because it has a dishwasher. Amy is trying to focus on her family. Tammy has lived with everyone in the family, Amy is the last one and she is going to have to get her act together. She needs to tell Tammy about the house, but she knows she is going to be upset.

Amy brings Tammy over some options for the background for the meet and greet. The meet and greet start, it is a little awkward, the first two women don’t talk much, Tammy opens up the conversation. They speak to people all over, even the UK. There were no haters or negative comments. Amy says they come from nothing and now they have this amazing support system.

Amy and Michael take Tammy out for a meal. Tammy orders something extremely healthy, she is really trying to stick to her goal. Amy reads some of their comments from YouTube and there are haters against Tammy. Amy tells her that they need to discuss something with her. The baby is coming soon and they have no room in that house, they are thinking of getting a bigger place.

Tammy says they didn’t need to bring her all the way out here to tell her that. The last time Tammy lived on her own she ended up in the ER and on life support. Tammy says she doesn’t care if they leave, she doesn’t need a babysitter. Tammy tells Amy that she is going to be fine, she has her phone and her walker, she is good.