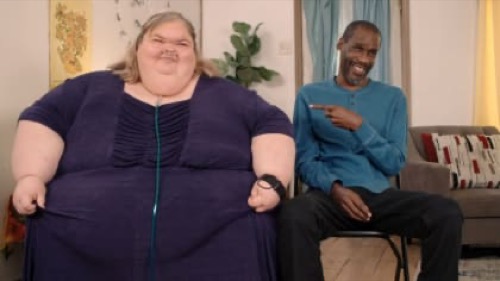 Tonight on TLC their fan-favorite series 1000-lb Sisters airs with an all-new Monday, March 8, 2021, Season 2 Episode 10 and we have your 1000-lb Sisters recap below. On tonight’s 1000-lb Sisters season, 2 episodes 10 called “Recovering from the coronavirus, Tammy now needs constant oxygen and her weight spirals.

Chris faces his final weigh-in; Amy makes a big decision about her future; with Tammy’s romance heating up, the family takes matters into its own hands.”

Tammy got sick. She was experiencing shortness of breath and it was so bad that they rushed her to a hospital in Indiana. Tammy was later diagnosed with Covid-19 as well as pneumonia. She almost died because her case was so severe. However, things did get better. Tammy was released from the hospital and she’s officially covid-free. Tammy was home now.

She was seeing people through her window and while she wasn’t back to her old self she was still one of the lucky ones. She got to leave the hospital. Tammy is still using an oxygen tank to breathe and so not everything went back to normal though she survived the worst of it and so did Chris. Chris was diagnosed with Covid-19 as well. He and his wife both were sick and they had no clue how they got the virus and neither did Tammy.

Tammy was given a second chance. Only she didn’t want to use it. She stopped dieting after she left the hospital and she gave up on her exercises as well. She just stopped caring. Tammy ignored her own health in quarantine and Chris didn’t fare any better. He was supposed to be down to 382. He was instead at 390. He didn’t meet his goal with Dr. Smith and that was hard to explain during their appointment with the doctor.

The doctor had wanted to know where they went wrong. Dr. Smith also gave Chris another goal of losing fifteen pounds per month and he wanted Tammy to return to where they started. Tammy was supposed to lose twenty-five pounds. She was 644 when she last saw the doctor and she actually gained twenty-one pounds since she last saw him.

She was now 660s. She’s been steadily gaining weight rather than losing it and Chris thought he was a poor diet buddy. Chris also wanted to know why Tammy was steadily gaining weight. He as well as the doctor had wanted to know where she was going wrong and so Tammy told them. Tammy told them that food is an addiction for her. She’s been struggling with eating less and Dr. Smith believed she needed to speak to another therapist. Tammy has tried therapists in the past. They didn’t seem to have helped her any back then and that could be because Tammy was resisting help, but Tammy finally called food addiction and that could be a step towards her getting better for real this time.

The doctor recommended another therapist. He also told Tammy that he wanted her to go back to her weight when they first met and so that meant a return to her routine. She has to start working out. She has to start dieting. Tammy wasn’t sure about how she felt about that and so her sister tried to put things into perspective for her. Amy visited her with her baby.

This was the first time that Tammy got to meet Gage and Gage was just adorable. Tammy fell in love with him right away. Her sister Amy told her that she could be around more if she starts getting healthy and Tammy told her that it was going to be one step at a time. Tammy’s boyfriend is in town. He and Tammy were trying out healthy shakes together and the shakes tasted awful. It didn’t taste as good as a pizza would and so Tammy apologized to her boyfriend. She apologizes for him having to experience her diet.

Tammy’s weight was also the topic of discussion with Amy and Michael. They were worried about her because they could see Tammy wasn’t losing weight and that meant the risk of her death went up as well. Tammy was almost seven hundred pounds. She needed to take charge and fix her weight. Amy has done it. Now, Chris has done it as well. Chris met his goal of losing fifteen pounds and so he was approved for surgery. He now just had to quit smoking. He’s been smoking since he was thirteen and it’s an unhealthy habit. Chris also was supposed to be doing this with Tammy and so this is the second time that her dieting partner is leaving her behind. Tammy got left behind by Amy as well.

Tammy never does what she’s supposed to. She shouldn’t have lost the weight when she was doing it with Amy and now she’s lost a second opportunity with Chris. Both Chris and Amy were worried about Tammy. They met up to talk about their sister and they discussed several things. They talked about the plot their mother bought for Tammy. The mother believes Tammy is living on borrowed time because she’s so big and so she bought two plots for Tammy so that Tammy could fit. Plus, a plot for herself. Their family is pretty morbid and the siblings are trying to change this. They both later talked to Tammy about her weight. They think Jerry is the one who is holding her back and they tried to tell her so.

Tammy got defensive. She said she was tired of them blaming Jerry and that all Jerry is trying to do is help her. But that wasn’t the full truth. Chris came to the house one day and he saw that Jerry had two pans of food. Tammy had tried to claim she didn’t eat the food though Chris pointed out to her that she does have a food addiction. She’s gained a hundred pounds in the last few months. Amy wasn’t bringing her the food and neither was Chris and so it had to be Jerry. Tammy wasn’t leaving the house. She was eating whatever was being brought to her and Jerry was bringing in unhealthy food. And so her siblings suggested that a care home might help because there the food would be restricted.

They also want her to see a therapist. She had told Dr. Smith that she would try and she hasn’t. She’s been doing everything she shouldn’t be doing. Tammy only started doing stuff right after her siblings pressured her. She later had a falling out with Jerry and the status of their relationship is unclear, but Tammy is now looking for Treatment facilities that can accommodate her weight.