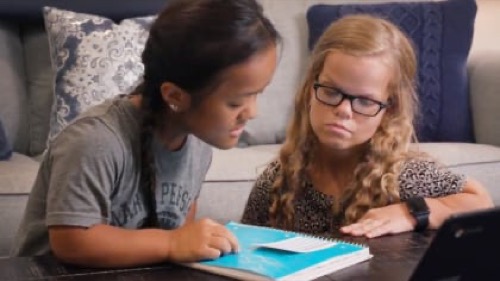 Tonight on TLC America’s largest know little family, 7 Little Johnstons returns with an all-new Tuesday, February 2, 2021, episode and we have your 7 Little Johnstons recap below. On tonight’s 7 Little Johnstons Season 8 Episode 6 “Who Is Thyself,” as per the TLC synopsis, “Alex and Emma are excited to finally start attending high school classes in person, but being a freshman comes with its challenges. Amber encourages Anna to start substitute teaching while Liz presses her dad to let her start driving.”

The two younger children are back at school. They started online learning for the first three weeks and then that turned into face to face learning. Emma and Alex are now high schoolers. They’re officially in high school now and that means tougher schoolwork as well as homework. Alex doesn’t struggle because he was adopted as a baby and he grew up knowing English however

Emma was adopted as a child. She first spoke Mandarin. She didn’t learn English until much later on and so she still occasionally struggles with the language. Emma has a speech therapist. The speech therapist helps her in understanding the English language and Emma also has her older sister Anna. Anna gets where Emma is coming from because she’s studying to be a teacher.

Anna used to work at a daycare. She was teaching there when she lost her job. The pandemic changes things in such a way that all learning and school opportunities were more or less cancelled if they couldn’t be done remotely. Anna was forced to come back home. It was the best decision for her at the time and she’s been making the best of it. She helps Emma with her homework.

It also helps that English wasn’t her first language either and so she knows certain methods to help with homework. She advised her sister to read everything out loud. Just hearing the words out loud will help her to spot a mistake in her translation and Anna did other things on top of that. She drove around her younger siblings.

Anna drives Liz to work. Liz was learning to drive when the pandemic broke out and her father basically put an end to it. He was struggling before then with teaching her to drive. Trent found it all frustrating and he came to losing his temper several times. So, the pandemic truly did help him in this one aspect. Trent got out of teaching his kid and he kept finding excuses for why he couldn’t teach her.

Liz would ask him for lessons because she wants to learn. She wants to get her own car and her father just kept putting her off. Liz got so frustrated that she was prepared to buy her own car. She was going to school and working. She has enough savings to purchase her own vehicle. She even told her siblings as much when the older kids went out for a game of golf.

Liz, Anna, and Jonah went golfing. They got to talking while they were at it and Liz told her siblings her plans of buying a car. She also told them that she was going to practice on her own because dad refused to teach her or help her in anyway. Anna also mentioned her plans. She told her siblings that she wanted to find a job at another daycare and she hoped that would be enough for her parents because she was thinking of pushing off school while she worked on her custom jewelry.

Anna wants her parents to be okay with her decisions. She also wouldn’t mind if they saw she was busy and decided to finally give Liz her own car. Liz was the third sibling. Her older siblings both received cars from their parents and Anna didn’t receive her until she was eighteen because she was bad.

Liz wasn’t bad. She was working and going to school. She was doing everything she was supposed. She just didn’t know why her parents were refusing to give her a car. She felt so frustrated that she wanted to go around them and that’s something Anna didn’t want to do. Anna later went out shopping with their mom. Their relationship has improved since Anna came back because Anna is no longer worried her parents don’t want her or are pushing her away.

She knows now that she’s loved. She also reached out to her mom because she wants the older woman’s opinion. Anna told the mom how she was looking for another job at a daycare and her mother brought up the possibility of working as a as a substitute.

It would mean Anna gets to go out into the field to actually teach. Only Anna wasn’t too sure about being a substitute because she wasn’t guaranteed of having the same class everytime and so that meant she would have to start over with explaining she’s a little person. She also couldn’t develop the relationships she wants with her students if she was a substitute.

Anna didn’t think she could be a teacher on a temporary basis and so she asked some other teachers she knew. Anna asked a trio of teachers if substituting made sense for someone like her. They all thought it would offer her great experience and they suggested that she get the little person out on the first day and then the rest would be smooth sailing.

One of the people Anna spoke to was Alex’s old teacher. Alex was the first little person this woman ever taught and so she asked Amber to come in to help explain what a little person is to the rest of the class. Alex was now a high schooler. He was going to homecoming with his friends and he was learning to be more social. His sister Emma was usually the social butterfly.

She would also usually be cheering at the homecoming parade and she’s choosing not to this year because she wants to focus on her studies. The kids were learning to go their way. Like Liz was going hers. Liz’s driving came up with her parents as they were having conversation with just the two of them. Amber told Trent that if he wanted Liz to drive that she would be driving by now and Amber wants to sign Liz up for driver’s ed.

Amber thinks Liz should have an outside teacher. Trent taught their two oldest children and yet he seems to struggle with Liz. Liz and Trent are a lot alike. Trent doesn’t know how to take criticism either and rather than their similarities bring them closer together – Trent is letting them drive them further apart. He made his daughter cry and feel overly emotional with his teaching style.

Liz hated being taught by Trent. She constantly felt her father thought the worst of her and she didn’t like it. She needed a change. Her mother spoke up for her and a driver’s ed class would do more for Liz than Trent’s teaching ever could. And Amber was just helping Liz, Anna later realized her mother was right about substituting and she’s going to give it a chance.