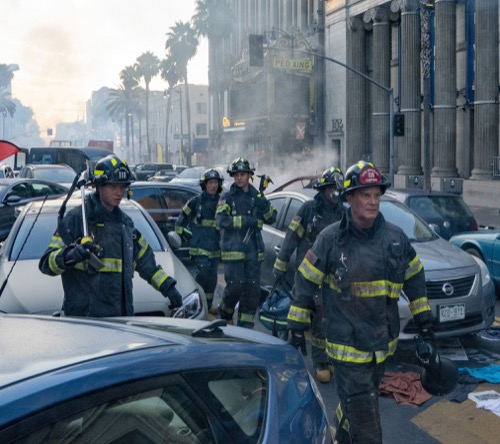 Tonight on FOX their #1 drama 9-1-1 airs with an all-new Monday, September 20, 2021, season 5 episode 1, “Panic” and we have your 9-1-1 recap below. In tonight’s 9-1-1 season 5 episode 1 premiere as per the FOX synopsis, “A series of ransomware threats leads to emergencies for the 118, including a helicopter crash at a hospital and an air traffic control tower system failure; the case of the realtor serial rapist goes to trial.”

9-1-1 begins tonight with Bobby Nash (Peter Krause) leading the crew along the LA streets where there are ostriches and giraffes wandering around, leaving everyone in awe; debris scattered everywhere, monkeys and wildlife are everywhere. Bobby jokes that he thought this year he thought things were going to be different as an elephant knocks over a sign behind them.

Maddie Kendall (Jennifer Love Hewitt) walks in finding Howie “Chimney” Han (Kenneth Choi) feeding breakfast to their infant daughter. She is going to a doctor’s appointment then lunch with Josh Russo (Bryan Safi). Howie is concerned about Maddie and her being overly tired and her new medication. Howie leaves for work, promising things will get better for Maddie. Meanwhile, at the firehouse, everyone is hassling Eddie Diaz (Ryan Guzman) about his girlfriend, Ana Flores (Gabrielle Walsh) taking the next step of bringing him to a family christening and “showing him off” to her entire family; Evan “Buck” Buckley (Oliver Stark) calling it the “opening of the Godfather” and Bobby reassuring him that he will have a good time.

Suddenly everyone’s cellphones go off with different emergencies. The 911 call center is going crazy, dispatchers are told to drop all calls that are not actual emergencies. A woman’s phone repeatedly calls 911 but she is struggling to deal with her GPS that is going wacky and she ends up going off the dock and her car is sinking; May Grant (Corinne Massiah) takes the call. May instructs her on how to get to the surface when the car fills with water but the crew arrives and gets her out before she can open the door. There are dozens of cars lined up by the docks, everyone is confused as to what is happening.

Taylor Kelly (Megan West) is too distracted with what is happening to pay attention to Buck, taking his phone to see what is the latest, realizing it wasn’t a bug in the software. Henrietta “Hen” Wilson (Aisha Hinds), Athena Grant (Angela Bassett), Michael Grant (Rockmond Dunbar), Karen Wilson (Tracie Thoms), and Bobby are discussing the cyber-attacks; learning this is not the first attack and there is no way to perfectly protect any system. The kids walk in saying their games are frozen, Karen jokes that this is the end of the world as they know it.

Athena says if the world is going to end, she would appreciate if it would end before 11 o’clock tomorrow morning as it is her court date against Jeffery Hudson (Noah Bean). In court, Mr. Hudson fires his lawyer. He has been charged with 6 counts of rape and a charge of nearly beating an LAPD Sargeant nearly to death; the judge wants to see counsel in chambers. The victims meet with Athena who reminds them they are stronger than they ever could be and they should not pay attention to his groupies. They are informed that Jeffrey will be allowed to question the victim himself and all his trophies that they found are not admissible in court and she is the first witness called to the stand.

Ana is helping Eddie getting prepared for the christening. Eddie is thrilled at how nice his son, Christopher Diaz (Gavin McHugh) looks but when the clerk calls Ana “mom” she says she is just a friend; Eddie collapses and 911 is called.

At the hospital, Eddie is informed it was a panic attack, where he denies anything has changed in his life but his son and Ana inform the doctor that 4 months ago he was shot by a sniper. The doctor feels like he is oppressing his feelings, saying he doesn’t panic. In the meantime, Athena hears noises outside her home and immediately reaches for her gun, using her flashlight she checks through her house finding her backdoor open. She is attacked in her kitchen and a fight ensues. He shoots the gun and she suddenly jumps up, realizing she was dreaming. She gets out of bed to find her son and Bobby in the kitchen making breakfast. Bobby looks on as she hugs her son tightly.

Back in court, Athena is on the stand testifying Jeffrey Hudson’s questions; recounting the night she was attacked by him. He uses the 5 times she is on file for professional misconduct, and the court makes their noise as the judge says she is going to recess until she makes her ruling.

The control tour at LAX is busy monitoring flights when suddenly a plane disappears on approach for landing, a supervisor feels it is a glitch and to simply continue when all flights disappear. She tells everyone to reroute everyone until further notice. The original plane that vanished reappears and it is in a collision course with the tower.

Everyone in the tower are using binoculars to watch for the plane as the supervisor tries to tell the pilot that they are not clear to land; there are 239 people on the plane and with the cloud cover they will not see the plane until it is literally on top of them. They are denied the right to leave the tower and told to brace for impact but nothing happens as nothing is there. One of the operators gets a call in, learning that the system failure is only to them and another station has reached all of the flights and everyone is safe; there’s applause everywhere.

The supervisor praises everyone for keeping their cool, but Nick Johnson (Jake Green) collapses and the crew arrives. Howie and Eddie are able to revive him as the supervisor explains how their systems went down. Another man grabs his chest and Captain Bobby Nash requests a second gurney. The systems seem to be rebooting when suddenly they all look like slot machines and a man’s face appears, saying, “You lose!” and the systems belong to them and demanding $25 million; this time the supervisor falls and Bobby asks for a third gurney.

In court, the judge returns but everyone’s cell phones begin ringing. She lectures everyone as their phones are supposed to be turned off, which they were. The correctional officers walk into the courtroom with the wrong defendants from both sides of the courtroom; when she demands them to clear the courtroom, one of them becomes erratic demanding his day in court. She asks everyone to take their seat and they all realize the defendant, Jeffrey Hudson has actually escaped the court causing LAPD to give chase onto the streets, including a terrified Athena.

Athena spots him and gives chase, but she is forced to rescue someone from an out-of-control car. Everything is under cyber attack as Athena looks on devastated.

Josh calls Maddie, waking her up from her nap. She whispers that she totally missed her doctor’s appointment, but he assures her that everyone is missing their appointments today. She has no idea about the “apocalypse” happening outside as he hangs up saying they will catch up for lunch after this blows over. Maddie puts on the news, cuddling her baby saying daddy will be pretty busy today.

Eddie is embarrassed when the doctor says she wasn’t expecting to see him again so soon as he brings in one of the patients from the airport. Bobby listens as the doctor explains how they are locked out of their computer, so no patient charts nor access to medications; they are also bagging patients as all vents have shut down. Bobby offers their help.

At the police station, Athena is trying to help Jeffrey’s victims who are terrified that he is out in the public. She promises that they will find him, suggesting they stay with friends and family until they find him. Athena and Detective Lou Ransone (Sasha Roiz) questions his lawyer about his groupies and realize they need to check the visitors’ log at the prison to see where he would be hiding out. Back at the hospital, Eddie is forced to admit to Buck that he had a panic attack. One of the nurses is headed to the roof of the hospital.

Athena and Lou are headed off to an address as Lou is warning Athena about being careful, but she is determined to not let the dirtbag get away with it again. The nurse is on the roof awaiting the organ for transplant. Lou walks into the house of one of the groupies who admits she set the table the night before as she was waiting for Jeffrey all night; Lou draws his gun and enters the back room as the power goes out. The helicopter prepares to land but all the power in the city goes out; the crew inside the hospital realizes something is wrong and hears the crash on the roof. Bobby tells them the generators need to wait.

Athena holds her gun up to one of the women at the door, orders her to open the door. Lou walks around the house with his gun drawn as well. Athena tries to reason with the woman who tells her that Jeffrey has to fire his lawyer as it was all her fault, making Athena realize something. Suddenly, his lawyer is at home and Jeffrey is inside her home. He begins to shove her around, wondering if she has any real fight in her at all. He takes any cash that she has but Lou is there in time, getting him thanks to Athena’s instincts. Athena is able to call his victims, informing them that they can go home as they are safe. Unfortunately, she is wrong as the lawyer slits Lou’s throat.