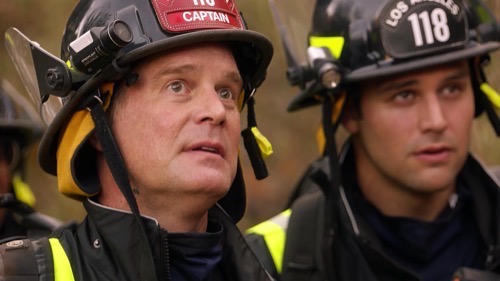 As Athena fights to save herself and an agoraphobic woman after her house collapses, Bobby, Hen and Eddie rush to save hikers endangered by the falling of the Hollywood sign.”

Athena was on light duty. She recently returned to work after an incident in the field and so she was supposed to be easing her way back into the job. However, that all changed once the dam broke. The dam broke and it created issues all throughout the city. Athena was sent into the field to clear neighborhoods that were at risk of being caught up in mudslides and that’s where she met Sylvia.

Sylvia lived in a home that was in the pathway of a mudslide. She was told to leave her home and she couldn’t do it. She hadn’t left her house in years. She suffered from a mental condition that caused her to be afraid of going outside and, with the way things currently stand with the pandemic, her condition makes perfect sense.

Sylvia was afraid. She has a right to that fear and so she didn’t want to leave her home. Athena tried talking to her. She used everything in her wheelhouse to convince Sylvia to leave and she still refused. No sooner did she refused, that a mudslide occurred. Athena had to run back into the Sylvia house in order to survive the onslaught. The two women were in the home as the house got swept away and fell over the hill.

They managed to survive the fall though they needed help to come rescue them and Athena’s radio wasn’t working and the nearby cell tower had been taken out. The two women were going to have to rescue themselves if they mean to survive and they weren’t the only ones cut off from aide.

The 118 was dispatched to the Hollywood sign. The legendary had come down during the mudslide and several homes got swept in as well. Near one of those homes, Chimney and Buck found a baby monitor. The second monitor was still with the baby and that baby was crying. The guys could hear that baby crying. They knew he or she was nearby. They tried to pick it up on their radios and they met with interference.

There shouldn’t be any interference what with the cell towers down. The interference therefore meant the baby monitor was messing with their radio and so they followed the interference. They went to where it was the loudest. The guys ended up finding a home that was buried and so they entered it through the chimney.

Athena meanwhile got to her radio. She called in her position and she filled in dispatch on her condition. She was fine. Sylvia was fine. They just needed to be rescued out of the house and in the meantime they promised to climb towards the light.

Only things didn’t go to plan. The house they were in was unstable and it moved again which forced both Athena and Sylvia to slide backwards into the house. Athena lost her radio again in the second slide. She was cut off from help and that frightened her daughter May. May is working as a 911 dispatcher. She was there when her mother call for help came in and she wanted to do everything possible to find her mother, but Maddie was on it.

Maddie alerted all help in the area that a police officer was in distress. Maddie also continued with her job and she advised May to do the same. They all needed to continue to do their jobs. Chimney and Buck were off rescuing a baby. Bobby, Eddie and Hen were rescuing a young man from quick sand. The young man’s name is Dylan and he came out on a hike with his roommate Caleb and Caleb’s girlfriend.

The other two were fine after the mudslide. It was just Dylan in danger and so Dylan told Caleb’s girlfriend that he loved her. He said its been agony watching her be happy with someone else. She got swept in the moment and she told him she loved him too. It was really awkward when Dylan was rescued because then they all had to go on the same helicopter and it turns out the girlfriend didn’t really love Dylan and she managed to upset him and Caleb both.

Chimney went down the chimney. He found the baby and he also found what he thought was the mother. It turns out that wasn’t the mother. That woman was a kidnapper and it wasn’t just the baby she kidnapped. She kidnapped a bunch of pregnant women. The women were locked inside the room and one of them was the mother of the baby. Also, one of the pregnant women were in labor. Chimney had to call for backup and the rest of the 118 arrived. They arrived with several other crews and together they put an end to this illegal adoption ring. The women were tricked into meeting with the woman named Carol and she then kidnapped them and forced them to give up their babies that she later sold.

Chimney had to deliver one of the babies down there. He got talking to the mother while he was at it and it made him realize how silly he’s been in distancing himself from Maddie. Maddie was expecting their first child. Chimney didn’t want to go home to her after a shift because he thought he was protecting her by staying away and only now does he realize how silly he’s been.

He should have been there with her through her pregnancy. He’s missed out on so much that he realized he doesn’t want to miss anything else. Chimney delivered the baby. Athena rescued Sylvia. Sylvia had been trapped under a cinder block and Athena pulled it off of her all by herself. Athena never once gave up on Sylvia. Even when she had been asked to.

Athena had found her radio. She got into contact with Maddie and May grabbed the phone. May told her mother to abandon the other woman and save herself, but her mother refused to do so and May got a serious talk about how they couldn’t abandon anyone out in the field. May later apologize for what she did. She told Maddie that nothing like that would happen again and Maddie is choosing to believe it won’t.

Thankfully, Athena had ignored her daughter’s pleas. She and Sylvia climbed out of the house and they made it back to Athena’s car which she turned on to draw attention to them. And a passing helicopter that was looking to carry out an air rescue had spotted Athena.

As it happens, Bobby was on that helicopter. He was looking for his wife ever since he found out she was in danger. Bobby rescued Athena and together they returned home to where their family held a celebration in honor of Athena’s first day back at work. And later May answered her mom’s question about why she gave up college to take on a job as a 911 dispatcher – it turns out May took the job because she thought she could help her mom for when Athena went back out into the field.

And in the end, Chimney finally went home to Maddie. His brother Albert moved in with Buck and so now the uncles are living together. And Buck won’t be able to hide his secret lady friend for long because the woman he’s talking to everyday is his therapist. Not his girlfriend.

And Hen started med school. Its online but she’s happy about it and so is her family.