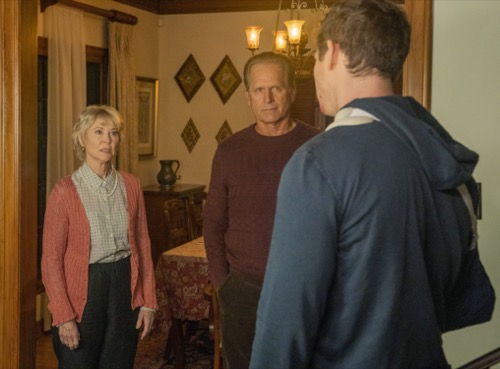 Meanwhile, Maddie reveals a painful family secret that causes Buck to confront his childhood and answer why he is the daredevil he is today ”

Buck was told the truth. His sister Maddie told him that they had a brother who died young from leukemia and that their parents didn’t know how to handle it. They didn’t know how to process their grief. They chose to move to a different town and they never talked about their older son. They didn’t even discuss him with Buck. Buck was conceived in the hope that he would be a match for his brother. He was, but the cells didn’t graft as much as they should have and Daniel suffered a relapse. He later died. The parents were suddenly faced with people who judged them for having Buck and they didn’t know to deal with that either. It’s why they chose to run. They left behind everyone who knew them or who could offer support to their children and then the Evans bailed on their children.

The Evans left their younger two children to fend for themselves. The only way that Buck could get attention from them was when he took some dangerous daredevil type risks and so he was constantly injured as a child. He did whatever it took for his parents to notice him. Buck hadn’t realized it at the time. Only he does see it now. He’s an adult now and he felt he should have been told about Daniel much sooner. Buck was angry at his parents. He was angry that he was used for spare parts and then throw away when he wasn’t enough. Buck was angry at everyone who knew the truth. He no longer trusted his sister Maddie because she kept this secret in spite of knowing that it would give him clarity on why his parents couldn’t love him.

Buck was also angry with Chimney. Chimney was told the truth and he didn’t tell Buck who was his friend. He instead kept it secret because that’s what Maddie asked him to do. Maddie was someone that Buck could allow himself to be angry with. He knew he couldn’t be angry with his parents because they lost a son and they’ve been grieving this whole time. Buck felt it would be selfish if he talked to them about him for once and not Daniel. Buck told his friends at the 118. They commiserated with him. They thought it was unfair that his parents ignored him for most of his childhood just because Buck couldn’t save Daniel. That wasn’t on Buck and his friends tried to tell him as much.

Buck has felt his entire life that the only person he could ever depend on was Maddie. She was the big sister that taught him to ride a bike and she was the first person to ever treat his wounds. It had hurt when she moved to be with Doug. Doug had been controlling even then and Buck had tried to warn her about him, but he also knew why she was in such a rush to leave home and so he didn’t blame her for pinning all her hopes on a control freak like Doug. Doug later turned out to be the man that Buck always feared he would be. He was abusive and Maddie had to run away from him before he killed her. And the saga with Doug didn’t end with her leaving him because somehow he managed to track her down.

Dough tried to kill her. She was forced to kill him and the whole time Buck had been there for her. Buck has always been there for his sister. He’s supported her in every decision she ever made. Even when it was marrying Doug and so her keeping quiet for so long did hurt because she was the one who raised him. Not their parents. Their parents checked out. Their parents could only be bothered to pay attention when Buck was either injured or in trouble. Buck was raised by Maddie. Maddie was the one who gave him money to start over somewhere new and she also gave him a car to do it in. He had needed that after getting kicked out of community college. He needed a fresh start and he asked Maddie to come with him at the time because he could sense that she wasn’t happy with Doug. And that she was only staying in the marriage to prove a point to her parents.

Buck remembered all of this as his station got called to a five-alarm fire. He still wasn’t speaking to Chimney and that made things awkward between them. Especially as they had to work together. Their station went into a building on fire and Buck found someone trapped inside. He did his best to rescue him. Only he got split off from his team and, in order to stop himself from panicking, he couldn’t help remembering the past. Buck traveled all around the United States. He left his parents’ house as Maddie suggested but she hadn’t gone with him and he had been forced to make the journey on his own. He took the jeep-like she suggested. He traveled south and then the Midwest and he went as far as Peru before he watched a film about firefighters.

He got the idea to join up from that film. By this point, he had already tried being a ranch hand and a Navy SEAL. He was also a mixologist. He was mixing drinks down in Peru when some of his beach buddies suggested going to California and that’s where the whole firefighter thing took off. Buck is now a firefighter. He responds to fires for a living. He was doing that with the warehouse when he was told to vacate the building because the fire was getting out of hand and he ignored the order. Buck had to because that’s when he found that survivor. He found the guy still trapped in the building and he did his best to rescue him because that came with the job. Buck and the guy got lost in the fire. Buck called in to report it and they told him it was going to be okay.

They told him they were coming for him. Buck kept the survivor alive until his friends showed up and his friends got the two men out of there. Buck was later told that the man he saved was probably glad he was being Buck. Buck hadn’t known what that meant, but it turns out he was known for never giving up and the world could do with more people like that. Buck survived the five-alarm fire. He was later checked out by the doctor and he was given the all-clear. Buck returned to work, but his parents were there waiting for him. They had wanted to talk. His parents had found out he knew the truth and so they felt they had to tell him that he wasn’t to blame for what happened to Daniel.

His parents loved him their own odd way. Buck was going to forgive him because it wasn’t their fault their child died or that they did everything possible to try and keep him alive. Buck was here now. He needed his parents to love him as he is and he also realized that he needed to forgive Maddie as well. He came to this realization after talking to Chimney. Chimney told him why Maddie hadn’t gone with him when she gave him the jeep. Her husband at the time had beaten her up and she hadn’t wanted Buck to know because she knew he would have confronted Doug about it. Maddie has been protecting her baby brother his whole life. That wasn’t going to change anytime soon and so Buck ultimately forgave his sister. It was the two of them against the world.