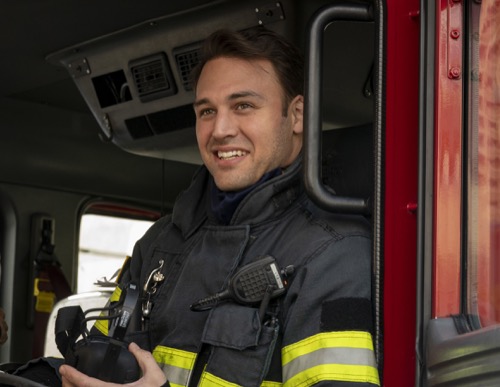 Tonight on FOX their #1 drama 9-1-1 airs with an all-new Monday, February 15, 2021, season 4 episode 6, “Jinx” and we have your 9-1-1 recap below. In tonight’s 9-1-1 season 4 episode 6 as per the FOX synopsis, “The 118 believes their fabled firehouse superstition has come true when they have the day from hell with a never-ending series of bizarre emergency calls – Athena is in hot pursuit of a 118 firetruck; a man who duct-taped himself to freeway billboard, a garage full of fireworks and a restaurant manager destroying his own business.

Meanwhile, Eddie feels a spark with Christopher’s former teacher, but admits to Bobby he may not be ready to move on in his personal life just yet”

In tonight’s episode of 9-1-1 Buck is ready for Buck 3.0. The older versions of himself were all at one point destroyed because of the people in his life and so he was ready to move on. He was ready to put the past behind him. His parents agreed to go to therapy with him. He was back on speaking terms with his sister. Buck was doing well for himself and he wanted to spread the good cheer.

Buck spoke to the probie. He was asking the probie about himself and how he’s been doing on a new job. However, the probie said the “q” word. He said it’s been quiet and people don’t say that in the 118 or any other firehouse because to say it would jinx them all. The probie jinxed them. It wasn’t long before the 118 was taking emergency calls and explaining to Eddie how screwed they were.

Eddie didn’t know about the jinx. He was just finding out about it. His team explained to them that using the word quiet would mean they would have to accept several calls that day and all of them would be wild. The last person to jinx them was Buck. Buck hadn’t known the dishwasher at the firehouse was working because it had been so quiet and unfortunately Buck said so.

He and his team ended up responding to thirty-six calls that day and not only were they run off their feet but they literally set a new record. Buck and the others, therefore, believe that they’ll be facing the same thing now that the jinx is in play again. Their first call was to a billboard. Some guy had taped himself naked to a billboard to promote his album and he didn’t want any help in getting down.

The naked man wanted to stay up there as long as possible so that people would download his album. He just didn’t use enough tape and the team wasn’t able to reach him in time. He did fall. Luckily, he fell on the blow-up bag and the team was soon off to their next call. Bobby ran into his wife on one of the calls. He told her about the jinx and she made fun of him for believing in it. Bobby tried to walk it back.

He claimed that his team made mistakes as long as they believe it was the jinx’s fault and so his wife gave him a penny for luck. She thought she was helping, but that penny didn’t do a damn thing because the jinx was just too strong. The firefighters were later in their engine when a live power pole fell on the truck.

Everyone inside became trapped inside. They literally had to call for someone to come rescue them and the jinx got so bad that even Eddie came to believe in it. Eddie had been dismissive of the curse. He ran into one of his son’s old teachers and he had thought he was lucky because now he can finally be flirty.

Not even the fireworks were enough to convince. This guy’s garage caught on fire and he had ten thousand dollars inside of it at the time. The whole thing went off. It was a fireworks show and there Eddie met someone from the 147 station house. The guy had helped in dousing the fire at the garage and then he disappeared. It turns out the guy Eddie spoke to wasn’t even a real firefighter.

The real station house 147 had been destroyed in the landslide and it was going to take months to rebuild and so the guy wearing 147 hats was an imposter. He’s been impersonating a real firefighter and he was even responding to calls. He had been there when the teacher got into an accident. He had been there at the garage fire. Eddie mentioned him to Bobby and Bobby helped him realize that the guy was a fraud.

The guys didn’t care about the fraudster because they thought he was just some wannabe firefighter. They assumed he was harmless and they didn’t realize differently until they ran into him again. Their fake fighter showed up at the scene of a supposed gas leak. A business was called and they were told they had to break all their windows because the building had a gas leak, but there was no gas leak and the 118 proved there was never was a gas leak.

He was a hoax. The fake firefighter called the business because he wanted to mess with them and pretend to be a hero again. The only reason he wasn’t able to do so now is that the real firefighters showed up. Eddie was just beginning to feel the effects of the curse when he spotted the fake firefighter at the scene and tried to talk to him.

Only the fraudster stole their engine. He stole their fire truck and drove away and so it was up to the police to chase him. Athena was nearby. She was the first to chase the fire truck and she did her best to convince the fraudster to turn himself though the guy just kept driving until the police eventually had to corner him. They cornered him. They thought there was no way out and he just kept driving.

He knew that the police would move out of his way if he forced them to. His truck against their little cars and it was no competition. The fraudster whose name was Ryan just kept driving and that was a problem the real firefighters had to respond to a five-alarm fire. They didn’t have their gear because it was left in the engine and so Eddie came up with a plan.

Eddie radioed their engine from the ambulance. He spoke to Ryan and he convinced Ryan that he could be a hero too if he responded to the fire as a real firefighter would. Eddie tricked him. Ryan went to the fire and he was arrested the moment he stepped out of the truck. The 118 was able to get their engine back. And Eddie came to believe in the curse, but he realized he didn’t want to be held back anymore and so he later went on a date with that beautiful teacher.

Eddie missed out as his team discussed Ryan. They didn’t know why Ryan had called that hoax and so Bobby said what he thought. He believed Ryan had genuinely thought he smelled gas at the restaurant. For someone who desperately wanted to be a firefighter, Ryan was horrible at it and so it’s a good thing he’s moved on to something else. Ryan now wants to be a cop. He fell in love with his new passion after he realized that a cop like Athena responds to more calls than firefighters.