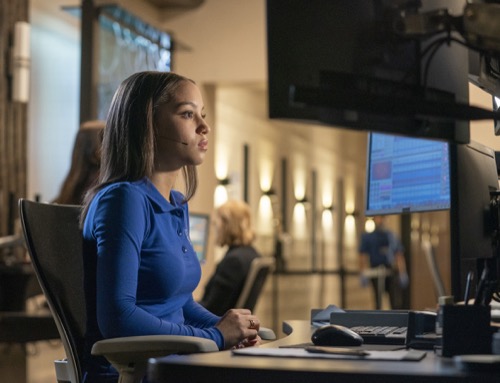 Tonight on FOX their #1 drama 9-1-1 airs with an all-new Monday, March 1, 2021, season 4 episode 7, “There Goes the Neighborhood” and we have your 9-1-1 recap below. In tonight’s 9-1-1 season 4 episode 7 as per the FOX synopsis, “A man gets pinned under a Humvee; a garage band rocks out too hard; Michael notices strange behavior at a nearby apartment; Hen’s mother unexpectedly arrives and announces she is moving to Los Angeles.”

In tonight’s 9-1-1 episode a man finds a local rock band all begin to scream as they practice in their garage. He calls for help. They are bleeding from their eyes. The team narrows down that they all have been smoking laced weed from a dispensary. Bobby sends Buck and the others to check on the neighbors who were also given some of the same weed.

Buck is on a date. He talks about the strangest calls he has been on. Meanwhile, Henrietta and her wife are having trouble with the kids fighting over electronics. Someone knocks. It’s Henrietta’s mom. She thought she would surprise them. She also has another surprise. She is moving back to the area and in their neighborhood.

Buck continues to say all of the wrong things on his date. After, he heads home and tells the guys he is done with dating apps. Buck decides to take out the trash and bumps right into his neighbor, the girl he just went on a date with.

Athena brings the kids to Michael’s new place. She is impressed. He shows Athena his telescope. They spy on all the neighbors with Michael telling Athena all about who they are. He explains that he has a lot of time with his job not going so well. He had so much he wanted to do since the tumor.

Maddie gets a call about a violent neighbor attacking everyone. Bobby and the team head to the scene. They discover the neighbor is actually a violent turkey.

Michael is spying on the neighbors when he sees a man washing what looks like blood off his hands. The next day, the team is called to a scene in a residential area why a humvee was actual dropped from a plane. A man is trapped underneath. The work to free him.

They get creative, freeing the man using a parachute. After, Buck visits with Maddie telling her about his bad date. At Henrietta’s, Athena visits with the family. Bobby visits with Michael. Athena has sent him to see Michael for dinner and to talk. Bobby asks about his new hobby. Michael shows Bobby and a neighbor who has women coming and going.

Henrietta heads into the kitchen to get something for her and Athena when she overhears her mom and wife talking. Her mom thinks she might be too old to continue in her career and head to medical school. Henrietta is upset. But doesn’t say anything just then.

Bobby and David go through the neighbor’s trash from across the street while Michael keeps a lookout. They find blood and supplies in the bags. They run back to Michael’s but he isn’t there. They use the telescope and see Michael has let himself into the neighbors home. Inside, Michael sees a woman in a room on a gurney with an IV hooked up. She whispers for help while bleeding. He calls 911. Suddenly, Michael is hit in the head.

Michael comes to. Athena and David are there with the police. But the woman he saw isn’t. She is going to look into it. At home, Michael talks to David and Bobby. After trying to figure out where the woman went he thinks she may live in the building. Bobby calls Athena. They locate the woman.

Henrietta vents about her mom to her wife. She thought they were fixing their relationship but that isn’t the case. The next day, Athena visits Michael and tells him the man was a doctor who lost his license and then moved her and started practicing in his home. Michael promises no more detective work.

Henrietta learns that her mom has been living in her van near the park. She lost her job and then got evicted. She would have told Henrietta but she didn’t want to be judged. Henrietta laughs. She felt judged as being too old for medical school. Her mom explains herself further. They begin to talk and work a lot of things out. They head home.

Michael starts a new project. Buck visits his new neighbor to apologize for the awkward date and finds his roommate there. Karen is accepting of Henrietta’s mom moving in.