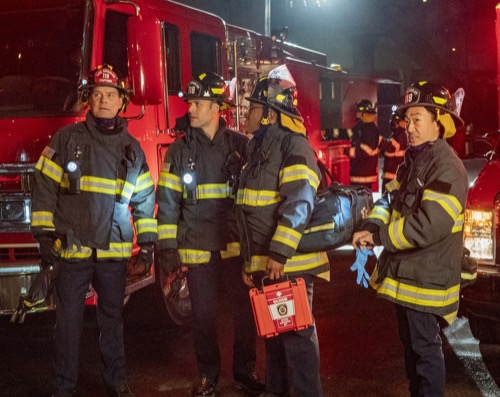 Meanwhile, with Buck’s help, Athena investigates the case of a missing woman last seen in a casino and Josh recalls an emergency in 2006 that led him to become a 9-1-1 operator”

In tonight’s episode of 9-1-1, a woman witnesses a crime taking place. She was in her car at the time and she was waiting for her husband in the parking lot while he ran in to grab some groceries. However, Sue Blevins left her car once she saw this crime. She left the safety of her vehicle to try and intervene. She was run over by whoever was getting away. He or she ran her over and they never once slowed down.

They were intending to kill her. They didn’t succeed because she was still breathing after being run over and thankfully the security guard to the supermarket had seen everything. She called for help. The 118 responded and Sue was rushed to the hospital. Sue had tried to talk. She had tried to tell the firefighters that what she saw was 911 only they didn’t get it. They thought she was trying to call for help for herself and they did their best to reassure her she was in safe hands.

The firefighters of the 118 had recognized Sue because several of their family members worked under her at the 911 call center. She was the one who ran the place and her staff loves her. Sue is a great woman. She’s very understanding and she’s always been there for anyone who needs help. Her staff was therefore shocked that anyone would want to harm Sue. May had recently joined the call center and she loves Sue.

She was shocked when her stepfather who was captain of the 118 had informed her of what happened and it came right after her big announcement. May informed her parents that she was moving out. She has a job now. She could afford to live on her own and so her mother wasn’t going to fight her on this.

Which came as a surprise to everyone who knew Athena. Athena would normally be the one leading the party that doesn’t want May to live on her own and yet she wasn’t fighting it because she said she didn’t want to be like her own mother. She doesn’t want to suffocate May to the point where her daughter doesn’t want to talk to her about anything important. It’s what happened with Athena and her own mom and so she doesn’t want to repeat the cycle.

It was now Michael who had a problem with May moving out. He contacted Athena to see if she would help him and she turned him down. Athena said he’s on his own with this one. Athena wants to be supportive of her daughter and that’s what she’s going to do.

Athena later responded to a 911 call. This guy called emergency services because a woman was threatening him with a bat and this woman was the mother of his ex-girlfriend. The ex-girlfriend Tracie is missing. She’s been missing for two days and the police weren’t looking for her because she was an adult woman.

It also didn’t help that she wasn’t white. She was black and twenty-one. The police weren’t concerned about her suddenly disappearing and so Athena was the first to listen to a grieving mother. Athena heard the woman out. She learned that Tracie hadn’t shown up for work or school for the last two days. She just disappeared and so Athena promised to look into it.

Sue meanwhile took a turn for the worse. Her condition was unstable and she flatlined more than once. Josh has taken over while she was at the hospital. He’s doing his best to fill the big shoes she left behind and he has Maddie there to help him. Josh was also remembering his first time meeting Sue. He had called 911 when the building he was working in had caught fire and she had been the voice on the other line that guided him to safety. Together, they had even rescued a woman. Josh told Sue when he found someone passed out from smoke inhalation and she told him what to do to get the woman onto his back so that he could carry her to safety. Sue stayed on the phone with him the whole time.

Sue was there until help arrived. Now, Josh was panicking at the thought of potentially losing her, and once again it was Maddie who kept him calm. Maddie told him that Sue was in safe hands. She needed surgery and Maddie believed it will go well. She has to. She refused to think of any other possibility and Josh has to do the same. The two of them were talking while Athena was connecting Sue’s hit and run to Tracie’s disappearance. Tracie had gone to the casino that night. She was playing big at the table and someone spiked her iced tea. This person then “escorted” her out of the casino and they took off in the same vehicle that later ran over Sue. Sue had witnessed a crime after all. She saw a kidnapping.

Athena wasn’t the only one making connections. It turns out Buck and his friend who happens to be a reporter were investigating the hit and run when they made a connection to another crime. The cops came across them while they were investigating things from their end. Buck happily gave up what he and his friend found. His friend on the other hand used the opportunity to question the police before she went ahead to air the story.

Sue spotted a kidnapping in progress. She witnessed Tracie Webber being kidnapped and they have the name of the culprit. His name is Patrick Ryan Boyd. This was splashed all over the news and soon people were calling in with sightings. The 911 call center passed everything onto the police. They reported the moment Boyd was seen entering a shipping yard and the police believed they cleared the area.

When they didn’t find Boyd, they thought he must have run off by then. They chose to stay at the shipping yard because they found Tracie there and later the 118 was brought in to treat Tracie for her injuries. She had been drugged and was dehydrated. The firefighters were treating her when nearby police spotted the suspect. He was apparently still at the shipping yard and they kept losing visual because it was dark out there.

It was practically a maze at the shipping yard. They didn’t have air support because the helicopter was taking forever to get there and so Josh acted as the air support. He arranged for the police to create a net around the suspect. He also warned them to put on protective gear if they didn’t have it because Boyd was armed.

Boyd was firing at anyone he came across. Josh helped the cops find him and afterward, he told the 118 it was safe to move Tracie. Josh did the job as Sue taught him. He later visited Sue at the hospital and she was back to her old self. She survived surgery and she was now recovering. She also immediately asked Josh about Tracie.

Tracie was safe and she too was at the hospital recovering. Athena was able to reunite Tracie with her mother. It made her think about her own daughter moving out and so she came up with conditions for May’s moving out. Athena wanted to protect her daughter. She came up with every possible scenario and now May is going out into the world prepared.

And it wasn’t long before Sue returned to work.