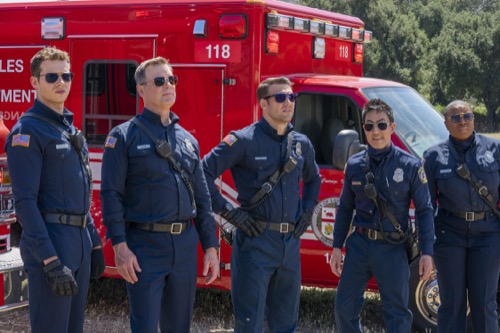 In tonight’s 9-1-1 episode, a father and daughter were on a morning hike when they found a note in a bottle in the nearby stream. The two of them thought the note would be something special and it was in a way. The message was from someone who was trapped. They needed help and they couldn’t call for it. They instead wrote the note. The stream carried the note and it was found, but it was found on a receipt dated five days ago and the search and rescue team knew that the odds weren’t great for their stranded person.

He listed in his note that he was trapped on a mountain. The search and rescue team used a helicopter to surveillance the area and they eventually found their trapped man. He was identified as Clyde. Clyde went out onto a mountain to get a better view. He slipped and he injured his ankle. And so he was stuck on the mountain for five days.

It was by pure chance that he had enough supplies to last him those five days. He also had a cell phone that died two days ago and so he was asked why he didn’t call for help much sooner. Clyde said he found the treasure. He didn’t want anyone else to find it before he could recover it and so that’s why he didn’t call for help. Only Clyde seriously injured himself. He wasn’t able to dig up the treasure and he was begging to be released back out into the area where he left.

The firefighters had no idea what he was talking about. They thought he was suffering from dehydration and they rushed him to the hospital. It was only later they found out about the treasure hunt. This multi-millionaire named Hollis Harcourt had recently passed away and, before he died, he buried five million dollars somewhere in LA.

Hollis posted a poem that held all the clues they needed to find the money online. Therefore, everyone in the city had an opportunity to find money and they were all willing to take risks. It was even like this for Buck. Buck tried to get his fellow firefighters interested in a real-life treasure hunt and all they could see were the pitfalls. They already had Clyde who risked his own life to find the money.

The whole city went crazy looking for the money and so Buck never had a chance of finding it. He originally wanted to go looking for it with Taylor but she was covering it on the news and he was constantly responding to 911 calls. They barely had a chance to look for it before someone else got injured.

Later, Eddie asked if he could join their team. Taylor’s cameraman was also joining the treasure hunt and so they agreed to split four ways only they still couldn’t find the money. They also couldn’t go looking for it in Hollis’s grave. The police had posted around-the-clock surveillance on the grave to keep people from digging it up and so people really were interested in doing everything possible to find the money.

Eddie and Buck grilled their fellow firefighters on where they were taking their most calls. Hen and Chimney realized the two were looking for the money and that they had been cut out and so they decided to team up to look for the money together. Bobby was also looking for money as well.

Bobby had to sneakily look for the money because his wife Athena thought the treasure hunt was crazy. She later found him hiding the evidence of his treasure-seeking and so she asked to see it. Athena still thought it was crazy but she loves her husband and she tried to support him.

She looked at his board. She told him where she arrested people and where they were looking and that helped him to recalibrate. Bobby was super excited about this treasure hunt. He was so happy about it that Athena asked him where this came from and where this was going. Bobby said he was going to set up a trust fund for kids. He also planned on retiring. He loves his job and everything. It’s just that after Athena had been attacked on the job – he questioned whether or not they should do something safer.

Athena appreciates how much Bobby wants to keep her safe. Only she doesn’t want to retire. She was going to keep doing the job until they forced her out and so she’s still going to be a cop. She was never going to be someone who likes to go fishing in retirement. Athena went back to work the next day and she got a call from Hollis’s former residence. The alarm company called about a break-in.

Athena saw that the door was open and she went in where she found Hollis. Hollis is alive. He was apparently writing a book for the last two years about a treasure hunt and he was having trouble with finishing it because he had writer’s block. The publishing company was even asking for a refund. Hollis didn’t want to return the money and so he created a real-life treasure hunt to help complete his book.

Hollis didn’t break any laws to fake his death. He had his publisher released a statement to announce it and so he didn’t fake any paperwork or bury a real body in his grave. Hollis himself was crazy. Athena couldn’t believe he did what he did and so she had to tell Bobby. She told Bobby. Bobby told his station and so they all wrote off Hollis as a known liar. They each stopped looking for the treasure hunt, but just when they stopped looking, Athena managed to put all the clues together.

She and Bobby went to the location and they ran into Chimney and Hen as well as Eddie and Buck. Taylor was also nearby with her cameraman in a helicopter. They all wanted the money and so they agreed to split it seven ways. And just as they came to an agreement, someone else beat to the punch and found the treasure.

The treasure was dug up. It was opened and it was found empty. Hollis really did con them all. The group went by Hollis’s home and they found the door open. Athena was the only cop there. She went in first with her gun and she found Hollis dead on the floor. Thankfully, her friends and family were right behind her and so they were her alibi.

The group didn’t kill Hollis. Someone else did and he had it coming. Hollis had a heart attack because a woman whose husband had been injured in his treasure hunt had destroyed his valuables and so no District Attorney is going to want to touch this. It also turns out that Hollis did try to bury the treasure. He asked his assistant to do it and his assistant chose to steal the money for himself after he found out Hollis lied about dying.

The assistant Jeremiah had taken the first flight out to the Maldives. The country doesn’t have any extradition and they couldn’t prove he committed a crime.

Taylor and Buck also talked about their relationship and they decided to stay friends rather than try for something more.