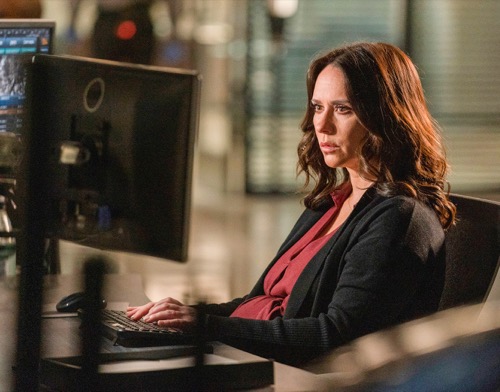 Tonight on FOX their #1 drama 9-1-1 airs with an all-new Monday, March 8, 2021, season 4 episode 8, Winter Finale, “Breaking Point” and we have your 9-1-1 recap below. In tonight’s 9-1-1 season 4 episode 8 as per the FOX synopsis, “The 118 are called to the tarmac when a flight attendant reaches her limit with her flight’s passengers; Eddie worries Christopher will not accept him dating; Buck reconnects with an old flame.”

In tonight’s 9-1-1 episode, a plane full of passengers are stuck on the tarmac. The passengers are getting upset and fidgety. The flight attendant gets frustrated and begins to down nips in the side compartment. She finally hits her breaking point, telling the entire plane off by intercom before opening the door.

The blow slide inflates. She takes a bottle of champagne and jumps down the slide. An employee on the tarmac rushes to her aid. She slides into him. The champagnes pop with the cork lodging into his trachea. The team arrives to help. They work to dislodge the cork. After, the man can breathe and speak. He tells his boss he quits. The flight attendant also tells him she is done as they are wheeled away.

Eddie and his girlfriend are talking about Christopher’s math homework. She offers to help Christopher but knows Eddie is afraid to introduce her to him yet. His alarm goes off. Eddie needs to head home. Buck is babysitting.

Buck arrives home and runs right into the girl Veronica who he went on a date with. She is now dating his roommate. All three of them are uncomfortable. Meanwhile, Chim and Maddie speak with their doctor by video. She asks about their birth plan and prepares them due to covid she might not be delivering their baby. After they end the video chat, Maddie tells Chim she wants to have their baby at home. He looks scared and surprised.

Bobby and the team stand by as Athena and her coworkers try to talk a man down from a rooftop. An hour later, the man is still on the roof. Buck talks to the local reporter about his roommate’s drama. Another hour passes, Chim and Henrietta play cards. Hour three, the man on the roof is trying to order a cheeseburger. More time goes by, the team hopes the man will jump. Suddenly the man is thrown into a car below. Behind him, the homeowner emerges.

At home, Buck makes something to eat when his roommates come in. He apologizes for dating Veronica. He asks Buck to come to Veronica’s for dinner. Buck tells him he will bring a date and then quickly calls the reporter he spoke with the other day.

Maddie is working the phones when a caller really tests her nerves. Athena pays May a visit and sees Maddie. They sit and talk. Maddie tells her how stressed she is about possibly having a home birth. Athena tries to give her perspective.

At home, Henrietta’s wife almost chops off her finger. They search for supplies and realize Nia has taken it to patch up her pig. They smile. Karen tells her they have an appointment with the agency soon to talk adoption.

Maddie gets another call about a needed welfare check. Athena arrives at the home. A woman is acting strange and blames it on her house alarm. When Athena asks about the woman’s husband, she acts even stranger. After a look around and many questions, the woman shares that her husband is behind the wall in a room. That’s where she put him. They were going through a divorce and he wouldn’t leave. She is shocked he is still alive. Athena cuffs her.

Eddie tries to tell Chris about his girlfriend but he gets upset and runs out of the kitchen. Meanwhile, Taylor arrives to see Buck and is surprised to see his roommate and a girl there. She thought it was just the two of them. After several minutes she gets annoyed and leaves, telling Buck he is riding and did this all for a show.

Eddie goes to see Chris and realizes he is missing. He calls Buck. Chris has gone over there. They talk. Buck tells him he is his friend and they should talk. Chris shares that Eddie is dating and it makes him sad. It is just one more person that is going to leave. Buck comforts him.

Chim comes home to find Maddie stocking the table with supplies for when she goes into birth. It hits him. He cannot do this. He needs her to give birth in a hospital so she doesn’t die. Maddie sees how upset he is and agrees. She will do whatever he thinks is best. They hug, he thanks her.

Buck calls Taylor to try and apologize. He sees she is reporting live. He watches her on TV as she starts to break down. She calls Buck back. She needs him. He arrives with Bobby and the team. The hospital fridge broke and she needs them to help. They get to work trying to save vaccines and administer them before they expire. Taylor forgives Buck after he gives her a miracle.

Back at home, Chris meets Eddie’s girlfriend. He hugs her. Maddie and he joke around while Buck’s roommate tells him he and Veronica broke up. Henrietta arrives home to see the agency rep. She is told Nia’s mom is back in the picture.