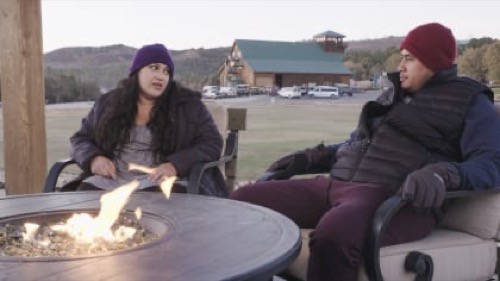 In tonight’s 90 day Fiance: Happily Ever After episode, ever since the fight with her sister, Elizabeth hasn’t been sleeping well. She couldn’t stop replaying over and over what happened on the boat. She got physical with her sister Becky. The two of them had to be pulled apart and to make things worse they also upset their father. Chuck hated seeing his children fight. He wanted to have a family reunion and he even thought they could rent an RV big enough for everyone to travel together but his RV idea was immediately shot down by his children. They gave him a prime example of why that was a bad idea. His children could not work together and they don’t seem like they can even be around each other without fighting. Elizabeth hated that she was fighting with her sister.

If it wasn’t Becky, it was Jenn or her brother Charlie. Her siblings all hated her husband Andrei and Andrei isn’t going anywhere. He and Elizabeth are solid. She ignores his problematic side and so she’s never going to side with her siblings over her spouse. They should stop trying. They hated her husband and they’ve never hidden it. It’s gotten worse since Andrei joined the family business. He’s now working with Chuck and the two seem to be finally getting along but that made his problems with the other family members worse. They didn’t like Andrei working in the family business. They didn’t like him around their father. They all think Andrei is a user and that he’s using Chuck. They have good reason to suspect this because Andrei has used Chuck as well as Chuck’s money in the past.

Andrei had only joined the family business because he wanted Chuck to fund his new business enterprise. The job with the family was just his way of getting that money and so the siblings were right to be mistrustful but they were wrong to do in front of Elizabeth. Elizabeth doesn’t see that they have a point. She just sees them ganging up on her husband and that forces her to defend him. Natalie wishes her own spouse Mike would defend her as much. Natalie has had problems with Mike’s mother Trish and it’s been said that Trish may have called her a whore. Trish definitely doesn’t think the marriage will work. She often picks fights with Natalie that were unnecessary and so Natalie had enough.

Natalie went outside to wait in the car. She didn’t care how long the rest of their trip to see Mike’s mother was going to take. She went in the car and she was going to wait there until Mike was ready to leave. Mike pretended not to understand why Natalie felt that way. He confronted her with his mother and they both downplayed everything Natalie was feeling much less dealing with, but Trish showed her true colors when they both stepped away from the car because that’s when she said give Natalie five thousand dollars and put her back on the plane to Ukraine. Trish truly believes Natalie can be bought. She doesn’t like Natalie and Natalie doesn’t like her and Mike pretends to be stuck in the middle when the truth is he sided with his mother a long time ago.

Kalani and Asuelu were better off than Mike and Natalie. Kalani and Asuelu were close to getting a divorce when a car accident brought them back together and nowadays they’re looking at sex shops. There weren’t any sex shops in Samoa. Kalani has also never been in one and so them going together was an experience. They came to learn about a lot of toys. Kalani and Asuelu both got something for themselves and something they can share. Kalani was very enthusiastic about the whip. She had a part of herself that could wait to whip the crap out of Asuelu and so he was looking a little worried. And other than the sex shop, the two were planning a weekend together and so they were hoping to use their toys on the weekend where they were supposed to be working on communication.

Angela has been doing well. Her weight-loss surgery has helped because she lost fifty pounds in the first month and so she was doing really well in one aspect but she continues to make a mistake by smoking. Her doctors told her not to smoke. She really shouldn’t be smoking post-op and so they talked to her about it. They asked why she couldn’t quit. She told them that she was dealing with a lot of stress right now because she wasn’t getting any emotional support from her husband and that’s when the doctors suggested edibles. Edibles are edible items made with marijuana. The doctor was hoping Angela would use these instead of smoking only she lives in Georgie where that wasn’t legal. The doctors suggested it because they were out in California where it was legal. And so they had to come up with other ideas.

Angela didn’t want to get high. She just wanted to relax. The doctor and the nurse suggest acupuncture as well as hypnosis. These are the things that Angela can try but that she doesn’t think will work. She thinks it’s all mumbo jumbo. She agreed to try it because she really does need to stop smoking and so she needs other ways to relax. If she keeps smoking, she risks a post-op complication and she could even die. Angela playing fast and loose with her life by smoking. She has to give it up and she has to give it up now. Angela just wishes she would have more support from Michael during this time. Michael doesn’t agree with all the surgeries. He thinks they’re expensive and that they should be saving money to have a baby and yet Angela doesn’t want to hear that.

Angela only ever hears what she wants to talk about. In that sense, she was a lot like Brandon’s mother. Brandon’s mother had to talk to Brandon and his new wife about having a celebration for them. They got married during the lockdown. They didn’t have a party afterward and they still don’t want one. Brandon and his wife Julia both told his parents that didn’t want to do anything to celebrate their wedding during his father’s 70th birthday. They just wanted to celebrate the birthday boy. Brandon’s mother heard what the couple said and then she ignored them. The party for her husband was divided into two with one side being decorated in birthday stuff and the other side being wedding stuff. And she also brought out a small wedding cake.

Brandon and Julia didn’t want this. They told her they didn’t want this and Julia has been suspicious of her mother-in-law because she thought their word would be ignored. But Brandon didn’t see it coming. He actually felt disrespected that his mother only saw him as a child and she didn’t consider his wishes. Brandon confronted his mother. He told her how upset he was and she blames it all on Julia. She thinks Julia is trying to come between them. Never mind that Julia is the wife and she’s merely the mother. Brandon’s mom needed someone to blame for her blatantly disregarding Brandon’s wishes and so naturally that person was Julia and not herself. Brandon wasn’t even to blame and it was him telling his mother that this was a bad idea.

Brandon and Julia are already married. They already celebrated amongst themselves and that was good enough for them. Why couldn’t it be good enough for the mom, too? Speaking of moms, Kalani’s mom ended up hearing more than she should have when she joined the couple on their weekend away. The couple had needed someone to watch the kids and so they brought her mother with them. the mother stayed with the kids in one cabin and the couple stayed in a second cabin. Cabins weren’t really Kalani’s idea of romance. It was Asuelu who picked a venue and he didn’t know that cabins in the woods were Kalani’s worst fear because it brought back memories of Mormon summer camp.

Asuelu did manage to make it romantic. He left flower petals leading to the bedroom and it was just the two of them. the kids were off with grandma. Asuelu and Kalani didn’t have to worry about them and so they reconnected on their trip away. Another one reconnecting, Elizabeth and Becky. The two met up at their sister Jenn’s house. It was supposed to clear the air and remove the tension but the women couldn’t stop themselves from getting into an argument. Becky still doesn’t approve of Andrei working in the family business because she feels like he’s gunning for her spot as the real estate agent and Andrei did just get his real estate license but arguing about it with Elizabeth isn’t helping anyone. They had to put aside their gripes with each other because their father wants to do a family reunion and no one wants to take that from him.

Angela’s stress levels kept rising. She kept smoking and she knew she needed to stop. She later booked a consultation with a hypnotist. She thinks it’s the only way to help her stop and the success rate is quite high. They have a success rate in the nineties. The doctor even told Angela to enjoy her last cigarette before her appointment and so she loved that last cigarette well. Angela has been smoking for forty years. She started at 13 and she’s now 54. She smoked her last and then she did the hypnosis. Angela describes the hypnosis as so soothing. She said she would have quack like a duck if he wanted her to and so she’s hoping she truly is over smoking but she said Michael can be a trigger.

Her next conversation with him will determine if she smokes or not. Angela was preparing herself for the worst with Michael and the worst was yet to come with Brandon and his family. Brandon told his family why he was angry. He also said that he and his wife wanted to move out and his parents laughed about it because they knew Brandon would hate paying bills. It’s why he moved back home after two months of living with a roommate. So, his parents are already saying he’ll be back. They don’t trust that he can stand on his own and it doesn’t help that Julia can’t work right now. Julia doesn’t have a job or even a higher degree. She’s not working and Brandon would have to be responsible for every bill as the sole provider. And so no wonder his parents don’t think it works.

His parents believe he’ll be moving back at the moment he had to give up going out to dinner with Julia. Or anything else while he focuses on paying the bills.

Trish later begged her son to divorce his wife and at this point that could be needed.