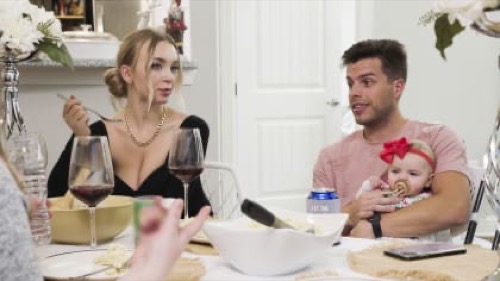 In tonight’s 90 Day Fiance episode, it’s been over two weeks since Angela ended things with Michael. Angela has been really heartbroken since the split and she wants to mend things however she doesn’t want to feel like she’s the only one who wants the marriage to work. Angela wants Michael to do his part as well. Angela spoke with her psychic Tracey.

Tracey agreed to do a reading and she suggested that it be done with Michael. Michael agreed to do it in spite of not believing in it. He agreed because he wanted to show Angela he was ready to be the man she married and so she took it as a good sign. They did a reading. They spoke with Tracey and Tracey got to the heart of their problems. Angela needs support. She wasn’t getting it from Michael and he was focusing on the wrong things.

Or at least that’s what both Tracey and Angela are saying. They’re saying that Michael is focusing on the material things and so they talked to Michael about it. Michael said he needs space. He needs to feel like he’s a man and he wasn’t getting that from Angela. Angela shouted. She yelled. She basically told him that he has all the space in the world and that he should stop whining.

She completely disregards him and most especially his feelings. Angela also got backed up by her psychic and so Tracey lost credibility by doing that. No one was listening to Michael and that remains Michael’s biggest concern. No one was listening to Jovi either. Jovi came back from work after being away for months only to find the baby now sleeps in their bed.

Jovi was once the party boy. He used to love the strip clubs and now he can’t get even have some alone time with his wife because the baby sleeps between them. Yara doesn’t see a problem with it. She got used to sleeping with the baby while Jovi was gone. Only now Jovi’s back. He wants to be with his wife and he couldn’t because the baby wasn’t sleeping in her own crib. Jovi tried talking to Yara about it and his mom has even said something. Yara just didn’t want to listen.

She got used to one way of doing things and now she doesn’t want it to change. Then there was Tiffany and Ronald. They had such a disastrous date night that they slept in different beds when they got back home and Tiffany later said she felt trapped while being in South Africa.

Tiffany has hated this whole visit. She doesn’t like how Ronald doesn’t help with the kids or how he goes on and on about being the man of the house but then doesn’t do anything to show it. If he wants to be strong, then be strong. Nothing Tiffany said or could have done would have prevented that if Ronald just did what he was supposed to do.

Ronald just likes complaining. He said that Tiffany doesn’t act like women he’s used to and she reminds him that they aren’t dating. They’re married. They have kids and responsibilities and so of course Tiffany is going to act differently. Tiffany is also a strong woman with opinions. She was that way when she married Ronald and she’s going to keep being that way.

Tiffany also wasn’t going to stop pushing Ronald to help. To not spend money they don’t have. To not give their children false expectations. Tiffany is so tired of having to support Ronald while he does none of what he should be doing and so that’s why she gets frustrated with him. It’s only Ronald that doesn’t see his failings.

He keeps accusing Tiffany of wanting to wear the pants in their relationship and he also goes as far back as the bible to justify men leading while women are silent. He’s just so ridiculous. Another one who went overboard with what women “should” be doing in Andrei. Andrei loves repeating he’s the man of the house and that it’s his wife Elizabeth’s job to watch their daughter Eleanor.

So, you know what she did. She went and hired a babysitter behind his back and he wouldn’t have found out about it if her sister Becky hadn’t accidentally spilled the beans. Andrei was furious when he found out. He wanted Elizabeth to take care of the baby as well as do her job and he was going to bring his parents over eventually to help with the baby.

Andrei disagrees with a stranger watching the kids. Elizabeth explained that it wasn’t a stranger. It was a friend of the family’s and she needed the help. Things have been different since Andrei started working. He used to be the stay-at-home parent and now he’s working with Elizabeth’s dad Chuck. Chuck and the whole family were in Maryland for a family reunion. And so Andrei lost it with his wife.

Then he calmed down because he said he didn’t want Chuck to see. Andrei was working for Chuck and he didn’t want his fight with his wife to affect his relationship with his father-in-law. Speaking of in-laws, Kalani’s mother-in-law was coming for a visit. She was visiting for the holidays and she wanted to bring her daughter Tammy with her.

The last time Kalani saw Tammy was when Tammy threatened to beat both her and her sister up. Tammy has never apologized for that. For all they knew, she could still be expected to beat everyone up and so neither Kalani nor her mother wanted Tammy around for the holidays. They wanted as much distance from her as possible. They weren’t ready to forgive what happened last time and nor should they be forced to.

Tammy actually tried to attack Kalani when they were last physically in the same area. It was her mother who had to stop her and Tammy didn’t learn a lesson after that time either. She still wants to fight everyone. If she comes, there might genuinely be a fight. There would be a fight over the holidays and the guys might get involved this time.

Which would lead to an even bigger fight happening. Kalani doesn’t want to be around Tammy and if Tammy is smart then she shouldn’t want the same either. Let the other sister go with their mother. Things were so bad that Asuelu picked up on it and right now he’s trying to convince Kalani to have a big family and so dealing with his family isn’t the way to get her on his side of having nine kids.

Angela and Michael meanwhile worked things through. Michael had to apologize and promise to treat Angela better and then she forgave him. there was no mention of Angela’s behavior or her apologizing to Michael for having surgery against his wishes or risking their future to look young and so their marriage was the same as before.

Angela dictates. Michael just deals with it. Yara also ended up crossing the line because she kicked everyone out after her Christmas dinner. She said they needed an early night and the truth is Yara kicked them out because they were bringing up valid points about her marriage. Her marriage isn’t working as it is. She has a baby sleeping in the bed and Jovi doesn’t feel comfortable about getting intimate with the baby right there.

Jovi was able to convince Yara to look at cribs. They went to a baby store and they went shopping for a crib. Jovi also wants to take a trip away from the baby. He tried to talk Yara into it and she didn’t see the point because she said they have to watch their baby. Their baby daughter Mylah isn’t even a year old. Yara focuses entirely on the baby and she doesn’t want to go out or have fun or be like she used to be. Yara used to be the party animal.

She used to stay out all night and have fun and now she just focuses on the baby. She doesn’t go out. She doesn’t spend a night away from the baby and Jovi needs a break. Jovi went from being a partying bachelor to a father and husband all at once. The baby coming so soon hadn’t been a part of their plans. They love Mylah and they love having her but Jovi needs a break and it’s Yara who keeps turning it down.

Angela and Michael later had video sex. She said it’s the best way to restart their relationship and so they’re officially back together now. Michael has also now seen Angela’s new chest. He gave his approval and he was still very attracted to her. Which is what she feared and why she was lashing out and so now she feels better. Then there was Ronald and Tiffany. They took a trip alone. Ronald took Tiffany to a car dealership and that’s where he told her his grand plan.

Ronald wishes to become a handyman. He said that he would work right away if he got a car to do the job and so Tiffany asked the smart questions. Like where was he going to come up with the money to buy the car as well as the tools he’s going to need. He couldn’t work without those things and there’s no telling he would make enough to pay back the debt he would have incurred by buying everything.

Ronald’s plan was not smart. It was just more debt on top of everything else and Tiffany said as much. Tiffany also finally admitted to seeing a divorce lawyer back in the States. She saw one after giving up hope that Ronald will ever change and so she hoped that by telling him he would realize how his behavior has been affecting her. But instead, Ronald got offended. He couldn’t believe she sought a divorce attorney or that she didn’t see him become a handyman as a good idea. Ronald only came up with the idea because he thought it would prove to her that he was going to become a provider. Right now, he couldn’t afford groceries or Christmas decorations. Ronald really thought the handyman idea would get Tiffany onboard.

And there was another fight between Andrei and his in-laws. The in-laws found out Chuck was going in on a house with Andrei and that they were going to split the proceeds and Jenn freaked. She began yelling at Andrei. She accused him of manipulating her dad while he was drunk. She and her sister Becky also got in Andrei’s face and it upset Chuck because he was tired of seeing his family arguing.