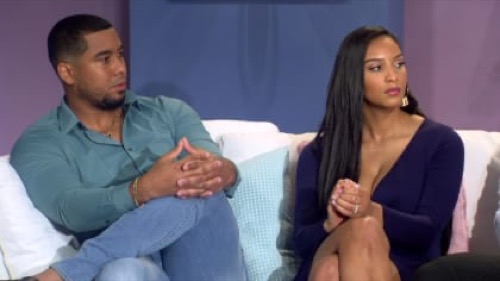 In tonight’s 90 Day Fiance Happily Ever After, it’s Part One of the Tell All! Everyone went in feeling tense and so the atmosphere was rife with conflict long before Shaun Robinson shot off her first question. But Shaun wasn’t innocent. Her questions were meant to stir up trouble and that’s exactly what they did. She began with a smaller crew than planned because a few people didn’t make it there on time. Mike was running late. He and Natalie haven’t seen each other in parts because they’ve been living apart and so Mike intentionally waited until everyone was seated to come in. There was also Angela. She too showed up late. Again, it was for effect. Angela has been working out for the past few months and she hit her goal weight. She couldn’t wait to show it off.

Angela did just that when she came out in a hot red jumper. The plunging neckline showed the breast reduction still left her with a lot and it was clear as day that she lost half of her body weight. She actually lost over a hundred and six pounds. She looked good. She felt good and Michael was proud of her. He said he couldn’t wait to see her on her next trip but she again confirmed how he wasn’t really all that supportive when she was first getting her surgeries. Angela and Michael were dramatic. They were always full of drama and surprisingly Shaun didn’t start her questions with them. She checked in everyone else before she began in on Mike and Natalie. Shaun asked them about the status of their relationship and Mike pretty much confirmed it was over.

Which wasn’t all that shocking. Their relationship fell apart after they got married and once again they’ve been living apart for months. Its also been noted that Natalie was seen out with another guy. It was actually surprising that Mike hasn’t filed for divorce yet because he does have a good cause too and some of the other guys there thought the same. They were pretty much on his side. Jovi even stated that Natalie came to New Orleans with a guy and that he thought it was suspicious. Natalie hadn’t acted like she was in a romantic relationship with this guy. She admitted she invited this guy along so that she wouldn’t be a third wheel when she met Yara and Jovi. She also laughed a lot when she said she wasn’t in a relationship and that confused everyone.

Julia said Natalie was two-faced. She asked Natalie who was funding her lifestyle away from Mike and it soon became clear that Mike is still funding Natalie. She still has his bank card. He said he was going to deactivate that card after today and that he was also filing for divorce. This was the first time Natalie was hearing this. She told Mike to go ahead and later she cried about it. Natalie claims she was depressed when she was with Mike. She said she came off anti-depressants once she left him and so she wishes him nothing but the best. Shaun next moved on to Tiffany and Ronald. The two of them have their ups and downs and they’re still going through with one of their lows because Ronald claims Tiffany tried to act like the man.

Tiffany rules their relationship. What she says goes. Tiffany also tells Ronald what to do and he hates that. Ronald said that Tiffany refuses to act like a woman. She’s a strong woman. He loves that about her, but he wishes she would relent every now and then and that just isn’t happening. Tiffany for her part said she has to do everything because Ronald refuses to step up. He doesn’t even do stuff when given the opportunity. It took her packing her bags and threatening to leave for him to start doing stuff to help her. Ronald also claimed she tried going off with a cameraman. Tiffany said that’s not what happened. And that she wasn’t going off to have an affair with someone else, she simply wanted to be away from Ronald at the time.

Tiffany said Ronald is jealous of the cameraman. She doesn’t know why and Ronald said she does know why. Ronald said Tiffany couldn’t stop talking about the cameraman. She was always saying what a wonderful man he is and he said she didn’t really know the man at all. Jealousy is causing a lot of issues. The distance doesn’t help and Tiffany admits if they didn’t have kids that they’ll probably be divorced by now. They love each other and that’s one of the reasons why they’re still together but they have issues and the issues are mounting up. Shaun next moved on to Julia and Brandon. They recently moved off of the family farm. They got their own place and it was so controversial with his parents that they blamed Julia for the move.

Julia had to leave their dog behind on the farm because the dog hated living in the apartment. Julia also talked about having babies and she said if she really wanted them she would have poked holes in the condoms by now. Brandon does have a part living with Julia’s jealousy, though. She was jealous of him hanging out with his friends and she didn’t want him to have a female friend. Julia was a jealous person. All of her exes cheated on her and that’s why she’s on the lookout with Brandon. Even though he’s never given her a reason to doubt him. Julia is still mistrustful of Brandon’s parents and she doesn’t want to accept their help in any way because she knows it comes with strings attached.

Brandon’s parents do want him to live closer to them. They currently live thirty minutes apart and even that wasn’t enough because his parents still complain. They mention they have health issues. They try to guilt Brandon into coming back and it doesn’t work because of Julia. Julia doesn’t want to move closer to them. She doesn’t want their help in buying a house. Julia wants Brandon to be wholly independent of them and right now she’s succeeding. Then Mike’s mom came out. Trish has always hated Natalie and she personally advocated for Mike to send her back to Ukraine. Trish said that Natalie only married Mike to come to America and she denies ever calling her a hooker. Which Natalie still stands by.

The others turned on Natalie. They all think she used Mike to come there and Julia was personally against her. Julia and Natalie didn’t get along. Julia seems to deeply dislike Natalie because she said people like Natalie make it hard for people like her to come to this country. Angela also disliked Natalie but not as much as Julia did. The commercial break didn’t stop the arguments. Trish still said Natalie was a liar and that Natalie lied about everything. She also claimed Natalie lied when she said Beau stole from her. Trish believes that Natalie pawned her jewelry and blamed it on Beau because she was a con artist. Trish also pointed out that Natalie hasn’t revealed her marriage breaking down to her own mother.

No idea how Trish found out about it but it’s true. Natalie called her mother during the commercial break and she admitted she’s not with Mike anymore. Eventually, the show came back, Shaun moved to a different topic. Shaun checked in with Angela and Michael. The two of them had problems when Angela first got her surgery because Michael wasn’t supportive in the slightest and he disappeared on Angela. Angela never knew where he went. She tried to reach him for a while and she just couldn’t. It was like he disappeared. Michael claimed it was never that bad. He said he goes out to family gatherings or to the church and that’s when she couldn’t reach him, but she disagrees.

Angela also said that emotionally Michael hasn’t been there for her. Angela has been hurt and there wasn’t much Michael could say now that could repair their relationship. Tiffany understands. Tiffany was also going to get the same surgery as Angela and so Angela was massively supportive of Tiffany’s surgery. But their situations were different because Angela is unlike anybody else. Angela flirted heavily with her doctor and she went to the man’s birthday. He also drove her home afterward. Angela said she was feeling sick and that the doctor offered to drive her home so that she didn’t have to end Skyla’s night as well. Angela said nothing happened. It was all innocent but a few people pointed out she wouldn’t have felt the same if the situation was reversed with Michael going home alone with a woman.

Michael was just finding out about it. He was upset. He couldn’t believe Angela failed to mention this and he only stopped being angry because Angela had basically demanded of it like him she does with everything else. She rules that relationship. This a problem for many and one of those people are Michael’s aunt. His Aunt Lydia appeared via facetime. She got into an argument with Angela and the argument was so bad that Angela flashed her new breasts and told Lydia to kiss them.