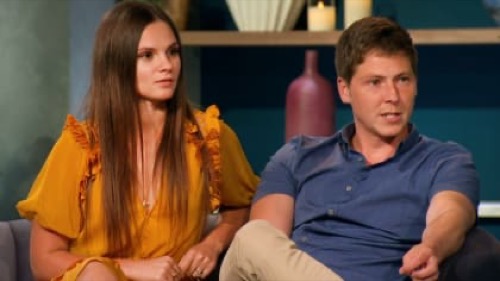 In tonight’s 90 Day Fiance, it’s Part Two of the Tell All! The show left off with Angela pulling down her jumpsuit and showing her aunt-in-law her new breasts with the message she can come suck them. Angela was disrespectful. She embarrassed he husband and then she had the nerve to storm off. Yara thought Angela was extra. Aunt Lydia agreed with her and also said Angela was a clown.

But Angela had her defenders. Kalani explained that Angela has always had personality and that Michael knew this when he married her. both she and Andrei defended Angela. They said Lydia shouldn’t have inserted herself into someone else’s marriage and that Michael should have defended his wife to his aunt.

Which was true. Michael should have defended his wife and he should have told his aunt that he loves Angela. He doesn’t care if he has children because he wants to be with Angela. Angela did come back to the stage. She apologized for being vulgar and she also spoke up for herself. She said Lydia shouldn’t be in her marriage. She over involves herself.

Lydia is just the aunt. She’s not Michael’s mother and it’s not her place to tell Angela to give Michael children or say that Michael should have children with someone else if Angela isn’t capable. This was rude. It was downright hurtful to Angela and maybe she did go too far in her reaction but Aunt Lydia also needs to shut up already.

Michael knows his aunt is too much. He warned Angela about it and she said as much tonight. She said Michael told her not to get close to Lydia. Michael denied that in front of cameras and so Angela said her catchphrase by this point. She said she was done. Michael called her later trying to win her back and she said it wasn’t going to work this time. She said their marriage in Nigeria wasn’t legal.

She called him not defending her the last straw and she left the studio. Like she changed out of her clothes and left. She was done with the Tell All. She also said she was done with Michael only she’s said that before and has gone back to them and so there’s no telling how this will play out. The show had to move on and so it was Elizabeth and Andrei’s turn in the hot seat.

They discussed what happened this season. Elizabeth hired a babysitter behind her husband’s back because she needed help with their daughter Ellie and Andrei couldn’t be there because he started working for the family business. Now, Andrei working for Elizabeth’s dad was a huge deal. It was supposed to be the start of Andrei and his father-in-law finally getting along and it instead turned into pure dramatic chaos.

Andrei butt heads with his brother-in-law Charlie. Charlie resented Andrei coming into the business and he did his best to push him out. He even tried to turn their relatives against Andrei during a family reunion. It got so bad that the two got into a physical altercation.

Charlie ended up attacking everyone in a frenzy and now it’s Charlie that’s being left out of things. Chuck was brought in. He was Elizabeth’s and Charlie’s father and he said the problems in the family began with Andrei. Elizabeth denied that. She said her family has always been dysfunctional. Chuck hasn’t seen it that way. He also didn’t think Andrei was manipulating him and yet Jenn did.

Jenn was Elizabeth’s sister. She thought Andrei went to their father for the loan because he knew their father would turn him down and offering him something else. Jenn thought Andrei had masterminded everything. She said he pushed Charlie out and Andrei’s response was to tell her that maybe she should go. And Chuck said he couldn’t lose his daughter because she was essential.

Chuck’s kids all worked for him. They helped him build his business and Chuck didn’t want to lose any of them. He wanted them to all get along. Yet, that seemed impossible with Andrei in the picture. Andrei didn’t get on well with his in-laws. He was honestly downright dismissive of them for the longest time and surprisingly he’s sensitive to criticisms.

Chuck gave him a house to live in for free in return for Andrei doing maintenance on it and Andrei got and made it when Chuck told him to cut the grass. His wife was pregnant at the time and they were just living on the income she made and yet they still moved because Andrei said he didn’t want his father-in-law dictating to him. They moved into a house that they helped pay for with Chuck’s help. He gave them the deposit money when he didn’t have to.

Chuck also made for both of their weddings. Chuck gave into Elizabeth a lot and this is what caused the issue. He spoils Elizabeth in a way he doesn’t with anyone else. Charlie got jealous and he remains jealous. They’re all adults. Only that didn’t mean a thing when it came to their father. They all want his love and approval. They get jealous when they feel his favoring one of them and that’s what led to the fault.

Andrei and Charlie got physical with each other because to them they were both competing for Chuck. The family ousted Charlie after the fight. They haven’t really spoken with him or worked with him. Charlie and more importantly Charlie’s drinking were a thing. He often gets drunk and then gets aggressive.

Charlie did this in Moldova. He did this back in the States. The man thinks drinking frees him from any responsibility. Charlie came out and he of course didn’t see how his siblings ousting him was his fault. He instead tried to blame Andrei. Andrei wasn’t having it. Both men refused to apologize and so the rift continues. Next up was Michael. Michael stayed after Angela left.

He was asked whether it was true or not that he was nursed until he was nine and he admitted it was. He grew up playing with her boobs. Michael knew it was weird. It just wasn’t weird to him. The whole set had a few laughs about that. They couldn’t help laughing because otherwise, it would be too gross and before you knew it was soon Yara and Jovi’s turn to discuss their season.

Jovi had missed the “fun” Yara. Things changed after they had a baby and Yara began staying in. Jovi wasn’t used to it. He thought they should liven things up. He took her to the strip club for their anniversary and it was a bust. Yara demanded to leave because she hated it. He refused to go and so she slapped him. Yara later told Jovi he had to change.

He had to grow up and giving up the partying or else she threatened to go back to Ukraine with the baby. Jovi’s main complaint with Yara was that he thought she was too attached to the baby. Which is true. Yara’s husband is often away a lot and so she’s spent that time alone with the baby. She is overly attached. She’s too attached and at the same time, she doesn’t know how to change it. And for that matter, Jovi doesn’t know how to change either.

Also, Yara is pregnant. She’s hasn’t had her period in two months and she hasn’t taken a test. Yara hasn’t taken a test because she doesn’t want to be pregnant right now. It’s a struggle with just one child. A second child on top of being on her own for a lot of the time would probably force her to move back to the Ukraine and Jovi would have to commute. Jovi could do it.

He could commute to Ukraine if that’s what’s best for his family and so hopefully Yara does a test soon and it comes out negative. No one wanted Yara to move back to Ukraine. Jovi’s mother was definitely going to miss her if she left and so again hopefully the test turns out negative. Kalani and Asuelu were the next topics of discussion.

Asuelu and Kalani have worked through a few of their issues. They came close to divorcing when a car accident helped put things in perspective and now they’re stronger than ever. They still had issues. Asuelu wanted to move back to Samoa with his family and Kalani was against it because she didn’t want to be the traditional Samoan wife.

Kalani didn’t want a bunch of kids or be stuck working in the home. She was fine with her two children and with being with her family in America. Kalani and Asuelu had discussed during the beginning of their relationship where they wanted to live and they agreed on America. Kalani and Asuelu still argue about how many children they want. Kalani doesn’t want more while Asuelu wants a football team.

This topic was brought up during Christmas celebrations. Asuelu’s sister Tammy and his mother were there and they both began hating on Kalani. They told Asuelu to find another woman. One who would give him children and so Asuelu escorted them out of the house.

He made them leave. His mother and sister haven’t forgiven him for that and they called Asuelu disrespectful. They also accused him of pushing them out of the house. Asuelu denies this. He said he escorted them out because they were incredibly rude to suggest he divorce his wife marry someone else. All of which was said in front of Kalani by the way. Kalani wanted nothing to do with her in-laws. They were cruel and selfish.

They also tried to turn things around on Asuelu. They claimed he was spoiled and that he doesn’t care about his family anymore but they were the spoiled ones. After all, they do constantly ask for money.

The show wrapped up and everyone said their goodbyes and Natalie for one was ready to start her single life.