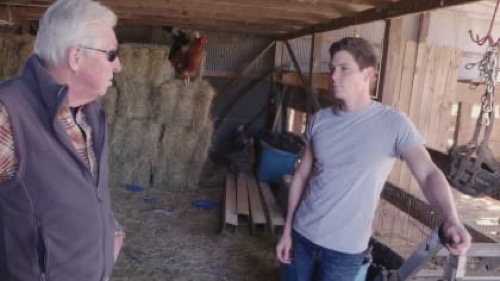 Tonight on TLC their popular reality show 90 Day Fiancé premiere with an all-new Sunday, January 17, 2021 episode and we have your 90 Day Fiancé recap below for you. On tonight’s 90 Day Fiancé season 8 episode 7 “You So Bad Boy,” as per the TLC Synopsis “A wild night gets Brandon and Julia into trouble. Zied’s first night doesn’t go as planned.

Mike feels insulted by Natalie. Yara worries she might be pregnant. Amira is released from custody. Hazel finds out Tarik has been texting their ex.”

So make sure to tune in tonight between 8 PM – 10 PM ET for our 90 Day Fiancé recap.  While you wait for our recap make sure to check out all our television spoilers, news, recaps, and more, here!

Brandon’s parents are gone for the night. He and Julia hot tub naked and enjoy their time. The next morning, Ron and Betty are back. Both of them are disappointed. Betty sees the hot tub is a mess and the water is cloudy. She lectures them. Brandon says they didn’t do anything in the hot tub.

Rebecca and Zied finally end their night with her daughter and boyfriend. They have not been alone in a year. After she shows him the apartment he tells her he is happy but she wonders if he is being truthful. He is acting off.

Natalie has been in the U.S. for 1 month. Mike works a lot. She stays home. She searches for the engagement ring she gave back to him in Ukraine.

Jovi is away for work. Yara meets with Jovi’s mom and aunt. They talk over coffee. Yara doesn’t want to talk about a wedding party. She wants to marry in Las Vegas. They learn from her she was previously engaged. They wonder what happened. Could she just be looking to come to the US?

Andrew sits and eats alone. Amira was detained. It has been 48 hours. He is worried about her safety and wonders if she will blame him for this. He goes on his phone and sees she is online somehow. He messages her. She responds. He is relieved. But sad she is headed home and not to him.

Brandon brings Julia tea in bed. His dad is already working on the farm and is annoyed. He needs Brandon to get serious and for Julia to try and work to earn her keep. They hope the two plan to stick around so they do not lose their son.

Tarik and Hazel head out to eat. She shares that she likes the US but does miss home. He talks to her about the amount of women that are here. She is bisexual and hopes to find a girlfriend she can share with him. She confronts him about talking to Minty, their ex This girlfriend. He tells her he was just checking on her because of covid. He says it wont happen again. She knows this was an excuse on his part.

Rebecca and Zied wake. It is his first day in America. She has to go to work. After she leaves, he makes coffee and starts to think about how he knows no-one here. He calls his mother. They are both sad. His mom misses him and vice versa.

Brandon’s parents talk to him and Julia about all the work on the farm. They feel neither is doing their share. Brandon blames Julia for making him stay with her after bringing her tea. She gets annoyed and leaves. She doesn’t like that he blames her. She also didn’t come here to take care of their stuff. Later, Brandon asks Julia to try harder. She says she will for him one more time.

Amira takes deep breaths in a bathroom and cries. She was detained. She was cold, locked in a room and told nothing. It was upsetting and scary.

Rebecca gets home from work. She and Zied are happy until he learns how much work marriage and the paperwork will be. He cannot go home for a year. This makes him upset. Rebecca wonders if they will make it.

Julia wakes up late, irritating Brandon’s parents. His dad talks to him alone about responsibility and the farm. Brandon doesn’t want the farm. Julia is his dream.

Yara is lonely with Jovi gone. She is starting to feel depressed. She calls her close friend. She misses home and shares that she has been sick alot. Maybe she is pregnant? She doesn’t know how. They have been careful. She and Jovi only sent two weeks together and she isn’t throwing up.

Natalie wonders if Mike is holding the end of the Ukraine trip against her. They fought a lot and she gave him back the ring. She feels like they do not respect one another at all. Maybe there is resentment?

Mike also wants to have a beer and eat meat, She wants him to lose weight. They make dinner. He has been drinking. He touches her shoulder. She jumps away. She is scared of him. He is drunk. She starts to talk about him being low class. He is annoyed. She puts herself on a pedestal.