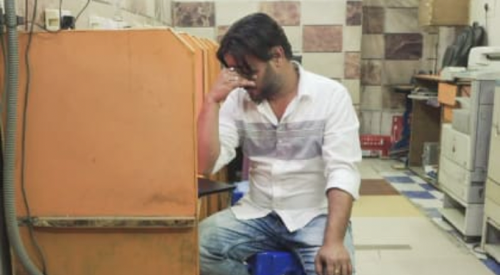 So make sure to tune in tonight between 8 PM – 10 PM ET for our 90 Day Fiance: The Other Way recap.  While you wait for our recap make sure to check out all our television spoilers, news, recaps, and more, here!

He also said that it had to be a court wedding because any celebration or formality would end in divorce and he wasn’t joking. The astrologer was clear as day. He reminded them that Sumit has been divorced once already and they didn’t want a repeat of that. Sumit and Jenny were just so glad to get the astrologer’s permission that they didn’t care they couldn’t have a formal wedding. And so the wedding was on.

Finally! Jenny and Sumit weren’t the only ones discussing marriage. Corey and Evelin discussed their formal wedding and Evelin seemed hesitant. Angry and hesitant. She was still thinking about Jenny and she couldn’t get past the “betrayal”. Evelin’s husband Corey had dated another woman during a brief breakup. They broke up and she threw him out. During a pandemic mind, you and so Corey went traveling where he met with up another woman.

They began a relationship. Things were getting serious when Evelin decided she wanted him back and he went running back to her. But Evelin can’t get past it. It didn’t help that Corey lied about details of this other relationship or that he hid how serious it had gotten before he left. Or in his case, ghosted this poor woman.

Evelin just couldn’t forgive. She would even dream about this other woman and wanting to slap Corey. Corey is trying to be understanding. He doesn’t get upset when she snaps at him because of a dream of all things and still that wasn’t enough for her because Evelin is jealous. She’s jealous that Corey was able to move on and so quickly with someone else. She also didn’t seem like she wanted to move on.

She likes being angry. It’s why she’s dragging her feet on a formal wedding because a formal wedding would feel more real and that’s not what Evelin wants. Not now, anyway. Right now, she wants to be angry and when is she not angry at him. Evelin from the very start was the woman who expected him to take the bus on the first day moving to Ecuador.

But while their marriage continues in this state of will they stay together or not, Biniyam was off fighting for his relationship. Biniyam and his fiancé Ari were fighting because she believed he cheated on her when she went back to the states for a doctor visit for their son. Ari had apparently been paying attention to what was going on in Ethiopia without her.

She found out that Biniyam had several people going in and out of the house at all hours and that includes women. Biniyam’s friends and even his family were telling her this and so she came to believe he was cheating. He cheated in the past. He cheated on a former girlfriend with his now ex-wife and Ari was afraid Biniyam went back to his roots once she was gone for a couple of weeks. And so Biniyam had to explain himself.

Biniyam had to explain himself to her mother. Ari’s mother was in Kenya to get answers and Binyam told her that “no” he didn’t cheat. He had guests over because he was recording music. Biniyam is a musician and he moved his studio to the house once Ari left. He said he did it for convenience. It also didn’t hurt that he was probably saving money on using the studio and so Ari’s mother believed him, but Ari is a different story.

She knows that Biniyam used the disguise of “work” to hide his relationship with his now-former ex-wife. Biniyam had told his then-girlfriend that the woman who went on to mother his eldest son was just a model and that nothing was going on. And so that’s what Ari will remember in the coming days.

With all the doom and gloom going on, it was such a relief to get back to Kenneth and Armando. The two are getting married and their families are coming together for the first time. Kenny’s family has always been supportive. They hated that they’re missing their father but they know he’s happy and in love and they wouldn’t want to wish anything else for him. Armando’s family on the other hand had struggled with him being gay. It wasn’t easy for them when he came out. It’s now harder with the fact he’s getting married and there’s no denying he’s gay anymore. His father surprisingly decided to make the trip. Armando’s father wants his son to be happy. He just didn’t react well to the engagement and everyone is afraid of offending him.

Armando wasn’t sure how his father would react at his wedding. He knew he and Kenny were going to kiss and have their first dance together as a married couple. He just wasn’t sure how his father would react to all of that. Jenny and Sumit didn’t have to worry about this because, while they didn’t get his parents’ approval, his parents at least agreed not to object to the wedding. They also now have the approval of the astrologer. The couple has everything they need to get married and still Sumit was afraid to go through with it. He talked with Jenny. He told her that he was scared of her leaving him and going back to the United States. His divorce was pretty traumatic. He doesn’t want to go through with another one and he doesn’t want to lose Jenny.

Whenever Jenny gets upset, she threatens to leave the country and the possibility of that scares Sumit. It scares him because he really does love her. She was his best friend and he wants to share every moment with her. He doesn’t ever want to lose her. Sumit had needed to comfort and that’s what Jenny. She told him she wasn’t going anywhere. She said he could never get rid of her and so the two later went to the courthouse. They found out they needed to complete a marriage application. They were doing so while Evelin and Corey were going through the final details of their formal wedding. Evelin admits to still being hesitant. But she also tells Corey that she doesn’t want a religious wedding because what if they get divorced and Corey hates when she does that.

Corey hates that she puts the word “divorce” out there. He brought it up to Evelin and she apologized. She said she’s going to try and stop being so mean to him. Only she was still insisting on Leslie performing the wedding because she doesn’t a religious wedding and that was also a problem. Corey knows Leslie doesn’t like him. He’s afraid she’s going to go up there and make a joke at his expense and he doesn’t want that. Not for his wedding. He tried to tell Evelin this and she’s refusing to budge or see how Leslie might be a problem. She doesn’t like Corey. She’s never liked Corey and Corey wants to feel at ease at his own wedding. He was paying for everything after all. And so the least Leslie could do was be nice to him at his own wedding.

Kenny thought his kids would be nice in the lead-up to his own wedding. He told them about how he and Armando were thinking of adopting a baby and they didn’t take it well. One of his daughters actually started to cry because she was feeling replaced. She said he already has kids and he sorta left them to be with Armando and now he’s starting over with Armando. His children also asked why Hannah couldn’t be enough.

Hannah is Armando’s daughter. She was still a little girl and so why couldn’t put all their childrearing skills into raising just Hannah. Kenny tried to explain that Armando is younger. He’s thirty-two and he only ever had one child. He might not be done yet and Kenny doesn’t want to hold back his dreams. And he was really hoping his kids would get on board with their decision to extend the family.

Then there was Ellie and Victor. The two were living in a tent because their home barely made it through a terrible hurricane and they were one of the lucky ones. The island of Providencia was destroyed by a Category Five. There was no tourism right now and ninety percent of the island was still recovering. But Victor remained hopeful. He also wanted to have a baby and that was going to be an issue because of both Ellie’s age as well as their finances.

Right now, it was Ellie’s savings keeping them afloat. She said they couldn’t afford to have a child because that would be expensive and then lead to a fight about their finances. Victor said he didn’t need her money. He said he was doing fine before her and that he would go back to making music or working. He used to work at a bar. And again tourism is currently dead right now because the island was destroyed.

Victor is being naïve if he thinks he could survive without Ellie’s financial support right now.

But Sumit realized his nerves were getting too out of hand and so he went back to thinking he’s not ready to get married yet.