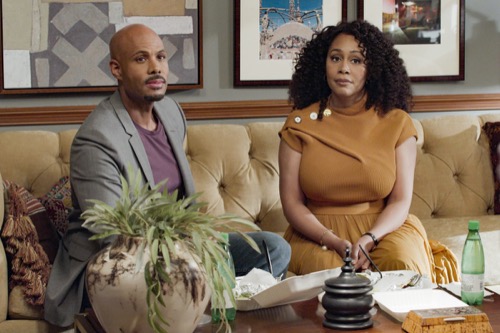 Tonight on CBS their new series All Rise airs with an all-new Monday, May 24, 2021, season 2 episode 17 called, “Yeet,” and we have your All Rise recap below. On tonight’s All Rise season 2 episode 17 as per the CBS synopsis, “The murder trials against Alexander Moore (Zayne Emory) and Jack Allen (Derek Luh) begin, and the pressure mounts when Lola agrees to allow media into the courtroom to support her re-election campaign.

Also, Mark and Amy commit to their relationship, even though they’re on opposite sides of the trial, and Luke looks for a way to win Emily back.”

In tonight’s All Rise finale episode, Judge Lola Carmichael was running for reelection to the bench. She needed all the support she could have right now and that meant now was the worst time for her husband to be offered a job undercover. Lola wants to support her husband. She didn’t ask him to stay because she didn’t want to put him in that position of choosing between his family and his job and so Robin was going to take the offer. He was going to go undercover for months on end.

He was going to leave his wife while she faced the biggest trial of her career and Lola told it was going to be okay. But it really wasn’t. Lola was facing three challengers for her seat and she was going up against someone like Martin Moore. Moore was the father of one of the defendants. He was also running for Mayor and he didn’t want his son’s trial to be used against him.

It’s why Moore hired Rachel and Amy. He wanted them to quash the trial or at most make sure that his son’s trial went second because then it wouldn’t be shown in the media while he made his mayoral bid and unfortunately they lost that opportunity. Emily beat them to it. Lola ruled to let Alex Moore’s case go first and so that meant his case will be in the news every day for weeks. Moore was not happy about that.

He called Rachel and Amy ineffectual. He was also talking about plea deals. Moore wanted the case to go away quickly and so he wanted his son to turn on his friend. Alex and his friend Jack were both being charged with murder. The cases against them were weak but it’s the media attention that Moore doesn’t want and so he wants his son to flip on Jack.

Rachel went to Mark to make a deal. She got him to agree to jail time and probation in exchange for Alex testifying against Jack, but there was a problem. She didn’t clear it past Amy and so the first Amy heard of it was when she watched Alex give false testimony to a Deputy District Attorney. Amy knew it was false because she had proof Alex killed Russell Thomas. There was footage of the event.

It showed Alex was yielding a knife and that he killed Russell Thomas and so his lawyers couldn’t lie about it. They also couldn’t let Alex give false testimony. It would be on all of their heads if Alex lied on the stand and that came out. So, Amy and Rachel found another way. They had Alex plead the fifth on the stand and that infuriated Mark who dismissed the plea deal. He was now going to charge Alex just like he was going to charge Jack.

Lola received a missive in court. It forced her to clear out the courtroom and to stop all filming in the court while she spoke with the trial lawyers. Lola was shown the video of the murder. She now knows that Alex was going to lie on the stand and so she considered it a flight risk. Alex was being put on hold without bail. He’s going to be in prison while Jack was released.

The charges against Jack were dropped and he was warned about covering for friends. With the case against Jack being dismissed, Emily was now free to take her to leave of absence. She wanted to travel to Miami with Joaquin and so the Public Defenders’ office was left short-staffed and Luke was considering stepping into those empty shoes. Luke wanted to help. He knows now that he does more for people outside of the District Attorney’s office.

Sam was staying on at the DA’s office. She was also kissing her new roommate Ness and it wasn’t awkward. If anything, it seemed right. Lola walked in on the potential couple and Sam left Ness to talk to her mentor. Lola told Ness that Sam was a great choice and Ness said she knew that. She always makes great choices.

Which includes clerking for Lola. Ness now has to decide where she would like to begin her career and she was thinking of becoming a defense lawyer because she needed to get rid of the student loans she has hanging over her. Ness was leaving Lola’s office and she wasn’t the only one. Sarah was leaving as well. Sarah was going to join the District Attorney’s Victim Assistance Program. She’s watched other people make a difference in the world and now she wants it to be her turn.

Robin was leaving for a job in Ohio. Lola has been thinking about her own position and that’s why she decided she wasn’t going to do a traditional reelection bid. She didn’t care about the big donors. She believed her work spoke for itself and that became clear after she found Alex Moore guilty of manslaughter. He’ll face years in prison. He also got an additional year for trying to blame his crimes on someone else. And with the trial over, Mark could focus on other things.

Mark proposed to Amy and Amy said yes. She’ll marry him the moment she’s divorced. She was also the one who released the tape of the murder and so it’s okay that she was fired by Moore. She was just glad that she served justice.

As for Robin, he changed his mind. He tried to quit the FBI and they gave him extended leave to think about it and he was going to use that time to be a stay-at-home father. And he and Lola also had a recommitment ceremony where they invited their friends to party with them.