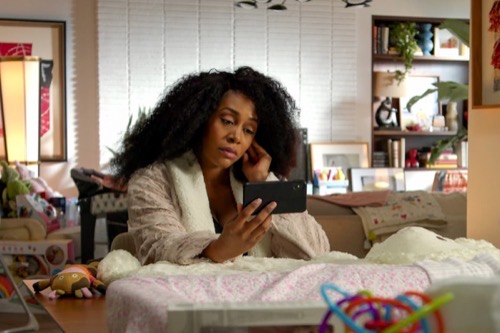 Tonight on CBS their new series All Rise airs with an all-new Monday, January 25, 2021, season 2 episode 7 called, “Almost The Meteor,” and we have your All Rise recap below. On tonight’s All Rise season 2 episode 7 “Almost The Meteor,” as per the CBS synopsis, “While Lola is on maternity leave after going into labor while on the bench, she attempts to participate remotely in Judge Brenner’s special training about brain science and the law.

Also, when Luke finds himself opposite Emily on an armed robbery case, he sees an ally in his experiment with restorative justice, and Mark hits another roadblock in his high profile case against a sheriff’s deputy.

Bailey Carmichael Taylor is her name. She’s the little girl that Judge Lola Carmichael gave birth to a few weeks ago and she’s taken every bit of her mother and father’s time. Lola was on maternity leave. Her usual courtroom was being handled by others and her three musketeers were being separated. Lola’s team was split up by Judge Benner. Benner relocated them to cover other courtrooms and she didn’t take any of them on as she covered her latest case. The judge was presiding over an armed robbery case. The defendant is Rafael Ibarra and he’s being defended by Emily. Emily was also going against her ex-boyfriend Luke who was working with the prosecutor. This was one of the rare few times these former lovebirds were going against each other and the two of them have decided not to make it awkward.

Luke is a clerk in the District Attorney’s office. He doesn’t get to choose which cases he takes on because nine times out of ten he was a second chair to the real prosecutor and so Luke has made peace with his situation. He was a junior officer of the court. He does his job and he doesn’t complain. Things were only different this time because of the DDA he got stuck with. DDA Driscoll blamed Luke when their material witness disappeared before trial and he basically demanded that Luke go hunt their witness down. Luke had needed help. He turned to his friend Sam and together they found Darius Moore. Darius had been hard to find because he was homeless. He was storing his stuff at a storage locker and he was couch-surfing with friends. He doesn’t want anyone to find out he’s homeless.

Darius also didn’t want to go to court to describe the moment Rafael pulled a knife on him. He wanted to just let things go and instead Luke talked to him about a new thing called “restorative justice”. Luke had talked about this with a new lawyer friend. This went against the usual trial and jury. This was a form of direct justice. Luke was starting to believe in this because he looked at the current system and he just has this feeling deep down that it is all wrong. Luke was a black man working with the prosecution. It was a hard thing for him to do so and that’s why he wants to change things. Like he didn’t want to charge Rafael with a felony. Rafael is eighteen and this felony would impact his life before it began.

Luke talked to Emily. He told Emily that if he lessened the charge that Rafael would have to apologize to Darius and she agreed to speak to her client about it. Only Luke didn’t go through his boss with this offer before he told Emily about it. Driscoll was ticked off by the deal. He didn’t think it was fair to the victim of the crime and he was going to shoot it down when his own boss overruled him. Luke got his deal. He was allowed to bring forth a restorative justice case. This meant that the courtroom was cleared so that only Darius and Rafael were there with Luke’s friend August Fox. Fox spoke to both boys. He got them to see each other’s point of view and they even bonded over their shared experiences.

The restorative justice thing was working until Rafael said the wrong thing. He was also couch surfing because he was homeless and he was thinking of how to make his life better when he came up with the idea to rob someone. This offended Darius. Darius couldn’t believe that Rafael wanted him to feel bad for him and so he stormed out of the courtroom, but not until after he told the prosecutor to do whatever he wanted with Rafael. It seems restorative justice didn’t work. Luke was upset that it fell through because that meant the deal he worked out wasn’t going to go through either. He thought his new mentor Fox would understand and Fox told him that the deal should never have been made. He said the prosecutor’s office should have had nothing to do with restorative justice because the master’s work against the master’s house would mean the master still runs things.

Fox wanted to cut out the prosecution altogether. He didn’t understand how or even why Luke would want to change the system inside the system and so Fox walked off angry. Luke couldn’t talk to him. He went to his boss and his boss is an Asian man. He’s Filipino-American. He was once assigned nothing but cases with Asian defendants and he later went out of his way to avoid them. Then at the last minute, he was given a case with an Asian man. The man had looked relieved when Luke’s boss walked into the courtroom and he had given his fellow Filipino ten years behind bars. Luke’s boss told him that the job was to carry out justice. They were supposed to remember the victim in all of this and Luke almost forgot about Darius.

The deal he worked with Rafael was too lenient. Benner wouldn’t agree to their current plea deal and so she gave them two options which would both mean Rafael couldn’t get into trouble again. Or else it will count as a strike. Luke didn’t like it and he still had to work with what he was given. He and Emily agreed. Justice was met in this case and that couldn’t always be said. Lola got into trouble over the summer because she stood up for a young girl with a backpack at a Black Lives Matter protest. She was given the backpack and she wants to return it to the young girl. Lola asked her team in the courtroom for their help only they couldn’t help her because they were helping their new judge with his cases.

Another situation in which justice was denied was when Mark was forced to make a deal with Deputy Peter Rachel. Rachel is going to serve jail time. He won’t serve the full sentence that he should be serving for shooting an unarmed man and the man had only agreed to accept the sentence because he felt bad for shooting Omar Aziz. Aziz wasn’t pleased, though. He was angry about what happened to him and he wanted someone to pay. He even wanted Mark to pay for the role he played in Aziz going to jail. And so all around, justice and what it meant was very fluid to various people.

Mark was told to take the win because eventually, he’ll have to take the hits too with the sheriff’s department.

Luke talked to Emily about his problems and she helped him to feel lighter.

Lola’s husband ended up helping her in finding the young Dionne Richardson and Lola feels a lot better knowing that Dionn was getting the help she needed.