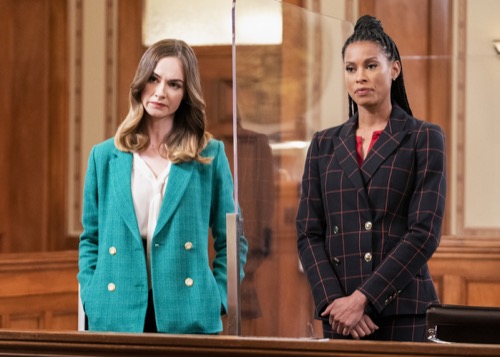 Tonight on CBS their new series All Rise airs with an all-new Monday, February 22, 2021, season 2 episode 9 called, “Safe To Fall,” and we have your All Rise recap below. On tonight’s All Rise season 2 episode 9 “Safe To Fall,” as per the CBS synopsis, “Emily and Sam face off in the courtroom in an emotionally gripping case that will determine the fate of a mentally ill young man who attacked his father.

In tonight’s episode of All Rise Judge Laski is out. He’s back in his old courtroom. He’s with his own team again and he even left behind a message for Lola and her people who welcomed him when he needed it the most. Laski is demanding his stag head back or he was going to hold onto Lola’s Star Trek figurine. Lola’s figurine is her good luck charm. She can’t find out it’s missing and so Sherri didn’t tell her.

Sherri kept quiet because she was going to handle the exchange on her own. She didn’t want to worry her judge or let her know that they were at war with Laski. Laski went too far when he took the figurine. He did that because the stag head was his own good luck charm and it meant as much to him as that figurine did to Lola. And so Sherri had to get back, but she couldn’t let her own judge find out about it and so she turned to the others for their help.

Sherri was off dealing with behind-the-scenes shenanigans while Mark was getting bad news. Mark has been dubbed “anti-police prosecutor” and so the whole system is now against him. They don’t believe he’s a team player. They don’t want to work with him anymore and that was a problem for Mark because he was used to being liked. Mark also had to deal with his ex-girlfriend Rachel. His ex and his new girlfriend run a law firm together. This wasn’t a problem for him because he was on friendly terms with his ex and so the problem occurred when suddenly his girlfriend Amy offered up their apartment to her. Rachel’s apartment was infested with bed bugs. She tried staying at the law firm and that too was a problem because a pipe burst there and so now that was flooded. And so Rachel needed a place to stay.

Amy offered up their apartment to her. She told Rachel she could stay as long as she wants and that was a problem for Rachel because she knew she was lying. Her apartment wasn’t riddled with bed bugs. She had let her apartment go because she was downsizing and so she had been staying at the office this whole time. But she wasn’t lying about the pipe burst. Rachel really did need a place to stay and she didn’t want to share an apartment with her ex.

So, Amy offered up her old apartment. She was currently renting it out and so she just needed to boot out her renter and then the place could be Rachel’s. This would mean Rachel could sleep on a bed again. She was going to need a place to stay while Amy deals with her renter and so she decided to take up Amy’s offer of staying at her and Mark’s apartment.

It made things awkward for Mark. He couldn’t walk around with his shirt off anymore because he thought that was inappropriate around guests and Rachel told him he was being silly because she has seen it all before. Rachel made sure not to say this around Amy. Amy also doesn’t know that Rachel tried going down memory lane with Mark once before and that it was Mark who didn’t want to go there.

Mark was happy with Amy. Mark was also dealing with enough as it is. He spoke to his mentor and a former DDA about rejoining Special Trials. Mark had wanted Carver to come to join him at work and Carver turned the offer down. He was vehement about not coming back to the District Attorney’s Office and he wasn’t the only one saying no. Mark had heard from his bosses that they didn’t want Carver back either.

It was a mystery to Mark. He knew Carver was a brilliant lawyer and so he didn’t understand why his bosses didn’t want him back. Mark was stumped and so he did what he always when he’s stumped – he turned to Lola. Lola was still at home with the baby. She heard Mark out about work and she even heard him complain about Rachel. Rachel hadn’t come by to see the baby yet.

Lola thought that was weird and Mark agreed with her. Lola helped Mark gather his thoughts and they were talking as Emily was struggling with her latest case. Emily was defending a young man named Alfredo Castro. Castro was found stabbing his father and he said he did because he hadn’t thought it was his father he was stabbing. He was suffering from a delusion. Emily got Castro a psychiatrist and the doctor determined that Alfredo was suffering from schizophrenia.

Castro’s sister didn’t believe he had the disease. She believes her brother was on drugs the night he attacked their father and so he wants her brother to spend the rest of his life behind bars. She would feel safer that way. Her father on the other hand disagrees with her. Javier Castro doesn’t want his son going to jail and at the same time, he didn’t want to be put on the stand.

It turns out Javier was hiding a big family secret. He knew his son was sick because his own mother had schizophrenia and she was moved from one mental hospital to another mental hospital. Javier never told his family about his mother. He did that truth because he was ashamed of it and he only told Emily because it was clear she was losing the case. The testimony from the psychiatrist had gotten turned on its head because Sam came up with another possible theory.

Sam was taking the lead in the case against Castro. She was trying to put him in jail and she didn’t understand why Luke wasn’t supportive of her. Luke just kept telling her not to write off Emily. Which wasn’t what Sam wanted to hear. Sam had wanted Luke to be on her side because the two were now together and instead he just kept showing her that he wasn’t entirely over his ex. Sam was jealous of Emily.

It was hard to go up against her in court and she did it anyway because she truly believed Castro was a danger to his family. Only Castro’s father later changed his mind about testifying. He testified in court that his son had thought he was an imposter who had hurt his father when he saw him and that’s why he attacked him. Javier also brought up his own mother. He told her that everyone had abandoned his mother in the end and he didn’t want that for his son.

It’s why Javier tried to cover up the fact that his son was sick. He didn’t want people turning on his son and that’s what happened anyway when they thought he was acting that way because of drugs. Even Castro’s sister changed his mind about him once she heard her father’s testimony. The father couldn’t afford Castro’s treatment on his own and so he needed the state to step in to help.

It’s why he changed his mind about testifying. The prosecutor and Sam agreed to accept that Castro was mentally ill and so now he’ll get help. Emily also technically won her case, but Sam didn’t mind it so much this time and she and Luke later talked. Sam told Luke that she couldn’t do their entanglement anymore because she wants more and she now realizes that he’ll never want the same. They should have just stayed friends.

Mark and Rachel should have stayed friends as well. Mark tried to support Rachel and she took it the wrong way. She kissed him. Mark made sure to end the kiss and Rachel later packed up her stuff. She wasn’t going to stay at Mark and Amy’s home any longer. She also wasn’t going to accept Amy’s offer of her own apartment. Rachel felt so bad that she just ghosted Amy and so Amy has no idea what happened. And Mark isn’t telling her.

Sherri also realized that it was Mark that took the stag head and she demanded that he returns it.