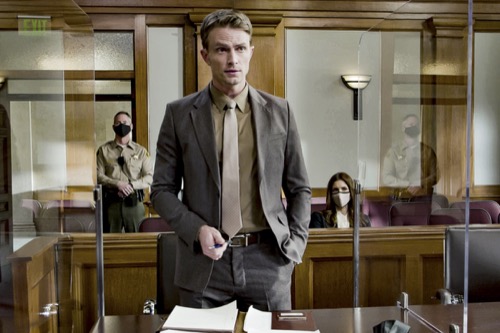 Still struggling with financial woes, Amy brings in a potential client who happens to be a friend of Mark’s father.”

In tonight’s All Rise episode, Lopez is in court trying to get more time to find a witness to help her client. Lola tells her she cannot have any more time.

Rachel visits Mark. She hopes he will never tell anyone about her kissing him. He agrees. Mark gets a call from a man disguising his voice. He has another package on the way. He calls Amy to tell her about the latest call. He doesn’t know what to do. She tells him to wait for the package then make a move.

Sara calls Benner. She is stressed. She drops all of her things coming out of the dry cleaners. A pretty brunette helps her. Benner takes a call. When she looks up the lady is gone.

Maggie heads back to tell the others about her win against Lopez. She suddenly gets sick, throwing up in the trash. They make her leave for rapid testing. Mark is forced to take her case. Meanwhile, Benner has a judge come in angry that he is expected to attend a seminar. They argue. Banner had better things to do when they are interrupted by the professor of the seminar, the woman who helped Benner with her things.

Lopez goes over her case with her client. He is doubtful now that they don’t have a witness. She gets a call. They just lost their expert too. They head to court. Mark comes in. She is surprised Luke isn’t filling in. Mark shares Luke and Sam broke up. Benner arrives. Mark asks for more time. Banner gives him 2 hours.

Benner arrives at the seminar. The topic is subconscious bias. The professor corrects Benner who thinks she doesn’t have any bias. The class goes back and forth about their opinions.

Benner returns to court after some heated debating with the professor. Mark cross-examines his client who IDs Lopez’s client as the thief who robbed her store. Lopez pulls up video footage of the woman’s store and the suspect. The client gets upset when Benner asks her how she could ID the suspect when he was wearing a hat and mask. She begins to cry. They take a recess.

Banner arrives to the break room to see Jonas flirting with the professor. Banner gets aspirin before running off. Mark meets with an eyewitness who tries to eat a sandwich while they talk. After court, Sara and Lopez talk. Luke walks by. He says hello before heading off. Sara thinks there was something to the whole birthday cake he gave her. Lopez waves it off.

The professor waits for Benner who is hiding in the stairwell. Sherri finds her. Benner shares that she likes the professor. She swears there was a spark. Sherri tells her to get in there. Benner sits with the professor.

Luke runs into Sam. Rachel ends up in between Amy and Mark. She gets uncomfortable and runs off. After talking to Amy, Mark has thought about his case and leaves too. Amy is wondering what is going on.

Benner and the professor stay late, talking. As the professor leaves, she gives Benner her number. Benner is thrilled. Meanwhile, Mark watches video footage of his client’s store. He sees Wu in footage shopping. He brings it to Benner. She allows the footage. Lopez is mad.

Amy questions Rachel why she is acting so weird. Meanwhile, Benner calls the professor to consult about the video footage. The next day, Lopez asks Wu why he was in the store but lied about it. He says he was afraid. Mark cross-examines him next and really brings the doubt.

Lopez sees Luke in the park. She is upset about her case. They talk about the cake. Amy bugs Rachel about a case she wants her to take. The client I offering a lot of money. They won’t discuss information anymore. But they need to talk about Mark. Amy shares she needs a divorce. Yes, she is still married.

Lopez’s client is found innocent. Benner calls the professor after. They make plans to eat dinner together. Then they watch an old movie together and hold hands!

Mark finds a package waiting for him. It’s a list and Luke’s name is on it.