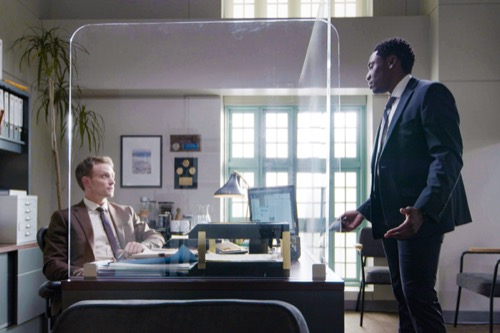 Tonight on CBS their new series All Rise airs with an all-new Monday, April 12, 2021, season 2 episode 11 called, “Forgive Us Our Trespasses,” and we have your All Rise recap below. On tonight’s All Rise season 2 episode 11 “Forgive Us Our Trespasses,” as per the CBS synopsis, “With Ness nearing the end of her clerkship, Lola sets her up to shadow Emily, who is defending a young man who reoffended, and the verdict lies with Judge Campbell (Peter MacNicol) who is notoriously harsh on repeat offenders.

Also, Rachel reveals to Lola that she kissed Mark, and Mark struggles to find out why Luke’s name is on a list of cops dropped off by Deep Throat.”

In tonight’s episode of All Rise, Mark eats a pop tart as he is stressed as soon as he wakes up. Amy teases him. She is also stressed because she will be working alone at her practice. Meanwhile, Lola sends a clerk to work with Emily. She isn’t thrilled.

Lisa and Sara talk about her new love interest. She is giddy and hopes it works out. Emily meets the clerk outside of court. They head in together. Her case gets heated with her client being reprimanded by the judge. The clerk is surprised. Emily tells her to buckle up. Albert calls Lola. He is angry. She prosecuted Emily’s client the first time. Why did she go so easy? Lola tells him not to take his past into account. He hangs up on her.

Mark finally calls Luke in and tells him about this secret source who has been sending him lists, pictures, and more. Luke is on the list. But he doesn’t know why.

Lola and Rachel meet for coffee. Rachel lets slip she kissed Mark. Lola is shocked. Rachel tells her she is moving on. In fact, she is headed out of town. Lola tells her she cannot keep running away.

Emily gets stressed as she tries to track down witnesses for her client Julian. The clerk who is shadowing her has another idea. They head out of the office. Lola shows up at Albert’s office. They debate about Julian’s case as he was previously part of a gang but swears he is out now.

Emily and her clerk meet with Julian’s pastor to ask about him. Meanwhile, Luke vents to a colleague about Mark. He feels like Mark treated him like they weren’t on the same team. Emily heads to speak with a former employer of Julian’s. She starts to realize everyone likes Julian but no one will take the stand. Maybe someone has threatened them?

Albert shares with Lola that his brother was mugged and beaten in a parking lot when he was younger. He just watched as he was frozen. Lola suggests maybe she is seeking revenge against violent offenders because of that incident.

Rachel says goodbye to Amy as she is leaving for New York. She encourages her to tell Mark she is still married. Meanwhile, Emily and the clerk arrive at the basketball courts to talk to Julian’s youth group. No one will talk to them again.

Emily visits Julian. She confronts him. She knows he is covering for some of the kids from the group. He ends their visit. When she gets back to the office she learns he tried to break up a fight in prison after she left. He is dead.

Luke finally talks to Mark. They discover the common denominator on all of Mark’s list is Luke’s training officer.

Emily meets with Albert. She wants to pay tribute to Julian. Albert is torn. Mark and Lola also talk. Finally, they discuss him kissing Rachel. Lola thinks Mark is madly in love with Amy and trying to sabotage it. Lola thinks he needs to tell Amy and make this right.

Albert reconvenes the court and announces Julian’s death. The case is dismissed. But anyone who would like to talk about Julian is welcome to take the stand. Cameron his brother speaks about his love for his brother. Emily heads back to the office. The clerk who has been shadowing her tells her to go home and rest. She has had a crap day. Instead, she asks her partner for the day and Sam to go for drinks.

Lola lets slip that Mark kissed Rachel to Amy. Lucas gets into a fight with some of his buddies about mark and his secret source. They beat him up, calling him a trader.