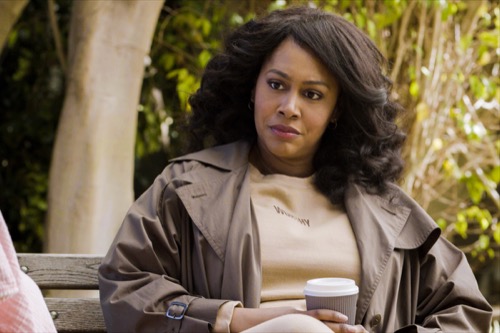 Tonight on CBS their new series All Rise airs with an all-new Monday, April 19, 2021, season 2 episode 12 called, “Chasing Waterfalls,” and we have your All Rise recap below. On tonight’s All Rise season 2 episode 12 as per the CBS synopsis, “Mark and Sam think their “Romeo and Juliet”-style murder case of warring families is a slam dunk until their lead witness is proven to be lying under oath to protect the real eyewitness of a relative’s murder. Also, Amy is furious with Mark after a secret is revealed and decides they need time apart.”

In tonight’s All Rise episode, Mark is in trouble. His best friend Judge Lola Carmichael was home right now on maternity leave and it seems her new baby has affected her judgment. She thought Mark’s girlfriend Amy came to see her because she knew about Mark and Rachel. Mark and Rachel kissed. Mark ended it because he was in love with Amy and he told Lola because again she was his best friend.

However, Lola revealed this secret to Amy who hadn’t known about it and so now there are repercussions. Amy is angry with Mark. Mark found out about this and he went rushing home. He tried to explain himself to Amy. She didn’t want to hear it. She had tried calling Rachel and Rachel wasn’t answering her phone and so Amy really didn’t want to hear from Mark.

Amy later told Mark to sleep somewhere else. She regrets moving in with him because he couldn’t even tell her himself what happened. She had to hear it from someone else and so Amy was tired of this relationship. She no longer trusts Mark. She doesn’t think he really loves her and she was stuck in the relationship because she already sold her condo.

She was also stuck in a partnership with Rachel because her name is on all the bills. Amy couldn’t escape both Amy and Mark but she was sure going to give it try and she began distancing herself from them by telling Mark to sleep somewhere else. Mark was off finding a place to sleep while Luke went to Emily for help. Luke was badly beaten up.

Luke didn’t want to reveal to Emily what really happened. He didn’t want to tell her the fight occurred because he was defending Mark and so he claimed he got injured in a bar fight. Luke didn’t want to go to the hospital. He stayed at Emily’s and she treated his wounds. She watched over him as he suffered what was most likely a concussion.

The next day, Emily woke up in a good mood and she asked Luke what he was going to do. He didn’t want to go into work with his beaten-up face. He told her he was going to take some time off. He didn’t tell her that he was supposed to be acting as a second chair to a big case and so his position went to Sam. She filled in for him. She acted as Mark’s second chair.

Emily felt so bad about possibly going to work that she changed her mind. She chose to stay at home with Luke and she tried to get him to talk. She also did her best to make him smile. She eventually did get a smile from him, but he hadn’t wanted to tell her the details of his fight and he used the opportunity where she checked in with people at the office to check his own voicemails. Luke had a voicemail from McCarthy. McCarthy suddenly wanted to talk.

It wasn’t that surprising seeing as McCarthy was behind his beat-down and so Luke was genuinely confused about whether or not he should contact the man again. Luke was going over this as Mark and Sam were losing their case. Their star witness changed his story on the stand.

Pete Petrovic and his wife Olga came from two warring families. They were the Romeo and Juliette of the Kirilenkos and the Petrovics. Sergei Kirilenko recently killed Mikhail Petrovic. Both men were brothers of Romeo and Juliette. The young couple has a new baby and they want to put the family drama behind them. Only Pete lied to the police. He told them he saw Sergei kill his brother and he went on stand originally sticking to the lie. It wasn’t until the defense lawyer proved he wasn’t a witness that Pete walked back his story. He didn’t witness the murder. He only said he did because he was trying to get justice for his brother and now he’s ruined things. There is no evidence against Sergei. The judge even took issue with Pete lying and so Sergei will most likely walk.

Mark and Sam also both became concerned when they couldn’t reach Luke. They eventually found him at Emily’s and they found Luke injured. Luke revealed he went looking for the list Mark wanted. The oh-so-important one that would solve everything and so Mark wanted Luke to testify against the deputies that beat him up, but he couldn’t do that. Luke said he threw the first punch. The other guys could claim it was self-defense and Luke didn’t want to fight them or get more entangled in Mark’s case. He told Mark so. Mark still kept pushing and so Emily had to take Mark to another room. She told him he had to calm down about this. He doesn’t get push Luke into doing something he doesn’t want to do.

Sam even agreed with Emily. She too was concerned about Luke and she didn’t want to force him into anything. Sam hugged Luke to tell him it would be alright. Emily walked in on this hug and it was awkward for everyone. Luke clearly still cares for Emily because he went to her when he was in trouble, but he and Sam are still friends in spite of their brief friends with benefits relationship and Emily knew about that relationship and so it awkward for her to see Sam hugging Luke.

Luke was still taking a few days off. He stayed at Emily’s and Mark and Sam went back to try their case. Mark realized that Pete lied about being a witness to his brother’s murder because he was covering up for the real witness. The real witness is his wife Olga.

Olga is a new mother. She cut off her family because she doesn’t want to live around violence and Pete did the same with his family. They just want to be together. They don’t want to hurt anyone or see anyone be hurt and so Olga was refusing to testify. She said if she did that then her family would use it as an excuse to torture and murder her.

Her own brother would probably do it. Sergei threatened Pete in court and so there’s no telling what he’d do to Olga. Olga wasn’t testifying. Mark tried to compel to testify and Sergei’s lawyer fought it. Judge Benner was tired of the antics in her court and she just wanted things to return to normal. She was reprimanding Mark as McCarthy managed to find Luke.

McCarthy showed up at Emily. He told Luke that he got what’s coming to him because he was betraying his own and so he and Luke got into another fight at the house, but this time Emily was there with a gun. She forced McCarthy into leaving her place. She was also pretty shaken up by pulling out her gun and so there was a brief moment when both she and Luke thought it was a good idea to go there again.

But they stopped before they slept together. Emily also apologized to Luke for crossing that line and she told him how she’s started over. She doesn’t want to repeat old bad habits. She wants to become a better person and as she was explaining this to Luke – Luke was telling her how much he misses her.

Luke still has feelings for her. He revealed as much when they talked and so Emily was leaning into her feelings right as Mark finally got Olga to testify. Olga testified against her brother because she had been promised protection for her family. Mark used his FBI connection otherwise known as Lola’s husband Robin to provide Olga witness protection.

She testified against her brother in the murder trial and he was found guilty. She was also going to provide evidence against her whole family and so Olga, Pete, and their baby were going to be safe now. They didn’t have to worry about either of their families. Mark also did his best to make it up to Amy. He held up his cell phone and he played the song from “Say Anything”.

It got Amy’s attention. She came outside and Mark used that chance to tell her how much he loves her. He said he was wrong for kissing Rachel. He also said that was the Old Mark and that he was the new Mark. Amy said she’s rushed into things before. She doesn’t want to rush into anything else and so she was still going to need time. And Mark was happy to give her all the time she needed.

Luke later approached Mark. He said he knows how to take down McCarthy and he asked Mark if he was on board. And he was.

And Sherri met someone. He works in another courtroom and they’ve both suffered feelings of loneliness because of the pandemic.