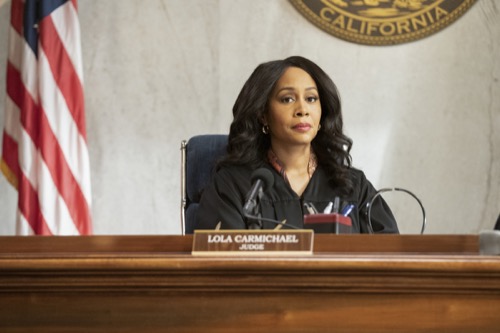 Tonight on CBS their new series All Rise airs with an all-new Monday, May 10, 2021, season 2 episode 15 called, “Hear My Voice,” and we have your All Rise recap below. On tonight’s All Rise season 2 episode 15 as per the CBS synopsis, “Mark and Sam think their “Lola finds herself in the judicial hot seat when she presides over the case of former Sheriff Wayne McCarthy; Detective Rashel and other cops come forward to speak against McCarthy, but Corinne continues to turn their testimonies against them.”

In tonight’s All Rise episode, Judge Lola Carmichael was looking at the toughest case she’s ever presided over. She was up for reelection soon and so she had to be careful about her actions. However, the defense we’re playing dirty. Deputy Wayne McCarthy and his attorney Cuthbert were carrying out this trial in the press. They reminded everyone that Lola was arrested at a BLM protest.

They claimed she hadn’t faced charges because of her position as a judge and they also were using her friendship with DDA Mark Callen against her. The two were best friends. They turned to each other when they couldn’t even talk to their significant others and so breaking contact for the term of this trial was painful. They wanted to talk to each other so badly. Lola wanted someone she could complain to about Cuthbert.

Mark wanted someone to talk to about his girlfriend’s secret marriage. Mark was in love with a woman who failed to tell him she was married and who only revealed it after she punished him for weeks for kissing another woman. Mark, therefore, needed space from her right now. He still loves her and he told her as much, but he wants to pick up his things while she’s out of the house and he doesn’t want to discuss their relationship until after the trial is over.

This is the biggest trial in Mark’s history as a Deputy District Attorney. He needed a clear head and he needed a judge who didn’t have something to prove. Lola wanted so desperately to prove she was unbiased that she approved each time Cuthbert objected to everything Mark said on the first day of trial.

Mark’s days in the courtroom were brutal. He was also there by himself. Luke had been sent to a different office while the trial was happening and Sam was acting as the first chair in a child abuse case. She was actually working on the case involving Sara. Sara was the tutor to a young girl named Nikki and Nikki was being abused by her mother. Her mother looked for excuses to “punish” her.

She called Nikki hateful names. She even hits her and it’s happened more than once. Nikki has been in and out of hospitals most of her childhood. Each time she was asked about suspicious bruising, she claimed she fell and no child could fall that many times. Nikki was being abused by her mother. Nikki had also called Sara after the trial against her mother began.

Nikki yelled at Sara for ruining her life. She said she couldn’t testify or else her mom would be mad and so Sara tried to tell her that telling the truth would mean her mom would get help. Only Nikki couldn’t see that. She was still a child and she lives in fear of her mother.

She thought their relationship was how things should be and not that she was living in fear of the only parent she has. Nikki hung up on Sara. Sara later had to disclose the phone call in court and now she’s facing sanctions. Sara wasn’t supposed to have contact with Nikki. She only accepted the call because she feared Nikki was in danger and she had to check for herself to see if Nikki was okay. The judge in the case didn’t see it that way.

The judge reprimanded Sara. The defense also wanted to use this to dismiss Sara’s testimony or at least claim she’s pressuring Nikki to testify against her mother, but Sam was fighting back. Sam was just as upset with Sara as everyone else. She just couldn’t show it. Sara was her star witness and so she told Sara not to take any more calls. Sam already had enough to deal with.

She was putting Nikki on the stand and she suspected Nikki would be a hostile witness. Again, Nikki is a child. She doesn’t understand that her home life is abuse and so Sam had to carefully lay it out for her in court. Sam made her case. She proved Mrs. Gessner used any excuse since her husband died to take her pain, as well as grief out on her child and even her own lawyer, was giving her a look at the end.

Things were also improving in Mark’s trial. Mark heard from Omar Aziz. He was the man who shot unarmed by a sheriff deputy and he doesn’t remember much from that time but he does recall hearing McCarthy’s voice that night. Mark decided to use this in his case against McCarthy. He asked the other deputy there that night if McCarthy had been there during the shooting and the deputy claimed not to remember.

This was the case for many of the deputies within the department. Mark was in fact losing his case when Luke stepped in to fill the gap and he testified that his training officer asked him to lie on an official report. Luke risked his own career by doing so. He did not receive immunity and so he can be tried for what he did. And what he said on the stand had not been great for McCarthy.

Once Luke was finishing testifying, he was free to talk to Mark and he gave him tips. He taught him the best way to get to McCarthy was to use his “family”. McCarthy doesn’t speak to his ex-wife or his actual children. He, therefore, views the deputes as his family because they’re all he had left and so Mark exploited that in court. He got McCarthy on the stand. He waited until the other man was vulnerable and then he struck.

He questioned McCarthy about the night Aziz was shot. He got him to admit he was part of the coverup and that he placed his fellow deputies over the public. McCarthy was later found guilty of conspiracy. His lawyer Cuthbert claimed she would find the charges in appeal and the police union came out against Lola.

The police union was now sponsoring someone else for Lola’s seat. She has to fight in the reelection and Benner brought someone to help with that. Benner also was there when her friend was found guilty of abusing Nikki. Nikki was going to be placed in a safe place and her mother couldn’t regain custody of her until she proved she was a fit parent.

Lola and Mark finally got to talk once the trial was over and he told her that he and Amy were on a break. And so she called them Ross and Rachel.