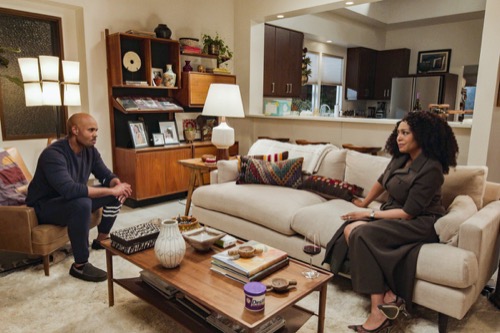 Tonight on CBS their new series All Rise airs with an all-new Monday, May 17, 2021, season 2 episode 16 called, “Leap of Faith,” and we have your All Rise recap below. On tonight’s All Rise season 2 episode 16 as per the CBS synopsis, “Mark and Sam think their “Lola is tested like never before during a high-profile murder case; David Sanders helps Lola court donations and endorsements to prepare for her upcoming re-election campaign.”

In tonight’s All Rise episode, Judge Lola Carmichael was facing opposition in her reelection to the bench. The police union came out against her and she was going to need backers. Her friend and mentor introduced her to David Sanders. He was a known name in the political arena and he advised her on what she should do. He told her to come to have dinner at the Hamilton Club. It was a prestigious club for wealthy donors and that’s what Lola needed.

She needed donors. Her husband and friends went to have dinner at the club, as well as a means of supporting her and them, got to talking. They talked about Mark’s relationship. He and Amy are on a break. He found out she was married and he walked out on her. He had needed time to process and that didn’t mean anything great for their relationship. She now needed time as well. And so the break was the best fit for them.

They didn’t have any contact outside of work. But their work usually means they’re on opposing sides and so that didn’t help the relationship either. Mark was also running into issues with Luke. Luke helped him win the McCarthy case and unfortunately, Luke’s career was taking a hit for it. He admitted on the stand that he lied on an official document. It didn’t matter why he did it or the fact that he was coming clean about it.

He was now just in trouble. His boss the District Attorney told Mark not to use Luke as his second chair for a case and so Mark had to use someone else. He decided on Carver and Sam. The three of them were handling another huge media case. They were bringing up murder charges against Jack Allen and Alexander Moore. And Mr. Moore’s father is the billionaire known as Martin Moore.

Martin Moore was paying for the best attorneys for his son. His son’s co-defendant Jack couldn’t afford high-priced attorneys and so he was using a public defender. Emily was his lawyer. She, Amy, and Rachel were on the defense with this case. Their respective clients were accused of murdering another young man by the name of Russell.

It happened after all three boys got into a fight about a girl and Russell was killed with an object that had to be brought to the fight, but that wasn’t found at the scene after the girl in question called for help. The boys were sticking to their story that Russell started the fight. The girl who called for help also couldn’t be asked because she had a mental breakdown after Russell’s death and so she’s considered unreliable. It was just Jack and Alex who were telling their story.

The young men claimed it was self-defense. Only Melissa who was the girl in question had been released from the psychiatric hospital and so she was now talking. She claims she saw a knife. She doesn’t know who had it and it could have been either boy. The boys were asked about this knife. Alex told his lawyers that Jack collects knives and Jack claims he doesn’t carry his knives around because of their collectibles but he did gift Alex a knife on his birthday and Alex went everywhere with the knife.

Jack didn’t say anything before because he was scared of Alex’s father. He said Martin Moore believes you’re either with him or against him and he doesn’t want to be on the bad list. Jack only admitted it to his lawyer because he didn’t want her thinking it was him that had the knife. Both boys were pointing fingers at each other behind closed doors and they weren’t saying anything in court.

In court, it was their lawyers who spoke. The lawyers asked for a bench trial because they said a jury trial wouldn’t be fair for them because of Martin Moore’s notoriety and Mark’s boss agreed to this. Mark had wanted a jury trial. He was geared for a jury trial when his boss suddenly changed his mind and now both sides were leaving everything up to Lola.

Her husband wasn’t used to the campaign or David taking up all of her time. He was going to need time to readjust and Lola had to give him that time. She meanwhile was focusing on her case. Lola was given a headache when Emily decided to separate the boys’ defense. She wanted them to have separate trials and she didn’t clear it with either Amy or Rachel. The other women were hoping to stick to their story that the boys acted in self-defense and that no one saw a knife or pulled a knife.

They were now worried that Emily will change her stance or that her client might lay the blame on Alex. Emily was currently going through a few things. She was busy deciding which man she wanted to be and the men weren’t really taking the process well. Luke was struggling. He was working with a new DDA and Choi had gone to bat for him.

But Choi was punished for doing that. The District Attorney offered him a promotion and this promotion comes with relocation. It was completely unfair on Choi. He has a family. He now has to uproot or live away from them and he knows that it’s about Luke. He told the District Attorney to promise him that Luke but the DA pretended not to understand what he was saying. Choi was packing up his old office when he called Luke in and gave him some last-minute advice.

He told him to stick to doing great things. Choi’s son thought they were saving their city with their job and so Luke could still be the good guy in the DA’s office. He didn’t have to take the private position he was offered. Luke has a lot to consider and he went to Emily for advice and she couldn’t help him decide. Emily won her motion to separate her case from the other ladies.

They now have to decide the hard part. They have to choose who goes first and, when Emily was doing that, she was telling her boyfriend that she was willing to move to Miami with him. Emily had made her decision. Amy also made hers. Amy ended things with Mark because she said her situation with Collier was going to et messy and she didn’t want to drag him into this but Mark kissed her.

He wasn’t supposed to do that. They were fighting opposing sides in court and they shouldn’t even have been talking only Mark told Amy he was going to fight for her and that’s what Amy wanted him to do. Amy was later contacted by someone who claims they have footage of Alex murdering Russell. They sent this footage to Amy and now she doesn’t know what to do with it.

Meanwhile, Ness was considering her next career move and for now, she was moving in with Sam because they both needed a roommate and more space.