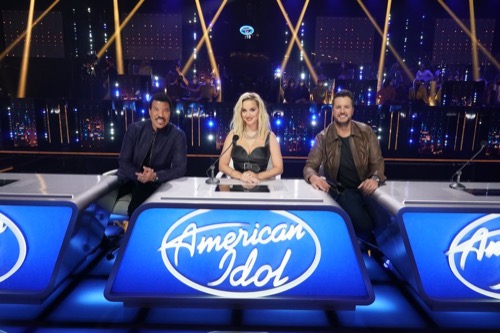 In tonight’s American Idol episode, Another sensational night packed with wall-to-wall music. Luke Bryan, Lionel Richie, and Katy Perry were back to judge the remaining twelve contestants in the Top 24, and up first was Jason Warrior. Jason performed “Call Out My Name” by the Weekend. It was a very emotional performance from him because he appeared to cry towards the end and so it was clear Jason was fighting to stay. They all wanted to stay, but sometimes they get depressed, and they lose track of what they’re fighting for and Jason thankfully wasn’t like that. He was there fighting to be his best. Jason performed a duet with PJ Morton and the two bonded over started their careers by singing at church.

Jason loved PJ. He seems to be a genuine fan and that easy relationship they created definitely helped their duet. The two performed “How Deep Is Your Love” by the Bee Gees and they put their own spin on it. It didn’t sound anything like its original. Which isn’t an easy thing to accomplish. Not with a song that so many know by heart and so they did well with that and the judges enjoyed it. The judges also said they wanted to see more risks from Jason. Katy wanted Jason to create his own sound and style. Luke backed her up by telling Jason that he shouldn’t be afraid to get dirty. Lionel meanwhile thought both performances were just amazing. They loved them both and had no criticism.

Next up was Madison Watkins. She performed “Holy” by Justin Bieber for her solo performance. It was a great selection for her voice and she sounded great performing it. Only she took a bigger risk with her duet. Madison performed her duet with her own personal idol Tori Kelly and she told Tori that she inspired her to leave her small town to pursue music. The two of them bonded. They also chose the song “Don’t You Worry ‘Bout A Thing” by Stevie Wonder for their duet and it was a great fit for them because, while Tori had sounded amazing like the trained professional she was, Madison showed that she was quick on her feet. She reacted to what Tori did onstage. They played off of each other and that’s such an important thing to do that the judges all took note of it.

All duets should be played that smart. The judges had nothing but good things to say about Madison and the night continued with Beane. He went next. He performed “Don’t Start Now” by Dua Lipa for his solo and he put his own rendition on the song. It was a bit iffy whether or not those choices were a great fit because two of the judges did give him a standing ovation, but Luke chose to remain seated and so that was very telling. Then there was the duet. Beane performed with Josh Groban and together they sang “Angels” by Robbie Williams. And this performance was a stronger one for Luke because he later complimented Beane for holding his own with such a powerhouse as Josh Groban.

Hannah Everhart went next. She performed “I Was Wrong” by Chris Stapleton for her solo and she once again that she has the singing part down like a pro. It was the other parts of the performance she needed to work on. Jason Aldean noticed this and so he helped Hannah out. He brought out some fierceness in her. They performed his song “She’s Country” and its more than a country song. It also had a rock element to it. Hannah was able to lean into that and she gave a truly lit performance. She was dancing to it. She was giving face. She had such great energy that the judges all sat up and noticed it. They told her to keep that energy going because her solo performance had been on the weaker side while her duet reminded them why she made it this far.

Mary Jo Young went next. She performed “Castle On The Hill” by Ed Sheeran for her solo and she did suffer from an issue with her eyes. She spent half of the song with them closed. Which does take away from the performance. She was much better about this in her duet with Jewel. Jewel and Mary Jo performed Jewel’s song “Foolish Games”. Mary Jo’s voice actually stepped up more with her duet and she gave perhaps one of her strongest performances to date. She held her own with a star. Mary Jo also showed the judges another side to herself that they haven’t seen before and they all spoke about it afterward. They all told Mary Jo she was amazing. They enjoyed her duet and they want to see more like it.

Next up was Chayce Beckham. He was known for his raspy voice and so any songs he performs are turned into his own rendition of it. He performed “Afterglow” by Ed Sheeran for his solo. He also performed his duet with Brandon Boyd from Incubus and Brandon confessed that he had been impressed by Chayce’s voice from his very first note during the auditions. He said that Chayce has a unique voice. He couldn’t wait to perform with him and later the two performed Brandon’s band’s song “Drive”. Chayce’s voice was so identifiable. It was so nice and raspy that it got a standing ovation from all three judges. And so Chayce was told to keep doing what he’s doing because he’s been great so far.

Up next was Colin Jamieson. He performed “Locked Out of Heaven” by Bruno Mars for his solo and it was clear he was having fun up on the stage. He was dancing around. He was smiling and relaxed and he got lucky because Tori Kelly was literally on his list of people he wanted to perform with. He was given her for his celeb duet. The two of them talked about how Tori felt when she was just starting out on “American Idol”. She admitted she was a bundle of nerves and Colin wasn’t like that at all. He’s been confident for the most part since the beginning. Colin and Tori performed her song “Hollow” and there was a minor mishap onstage because Colin got tangled up in his mic and so Lionel gave him some advice after the performance. He told him next time to just throw the stand away.

Lionel said that attitude will get him everywhere in the industry and this was important for everyone to remember. Liahona Olayan went next. She performed “Just Friends” by Audrey Mika for her solo and she showed a lot more confidence tonight than she has in the past. Liahona was one of those people that became depressed as they were filming and she was almost sent home. That time was also the last time that Liahona performed an emotional song. She’s used to more upbeat songs because she felt emotional songs were out of her comfort zone and so leave it to PJ Morton to give her one of his more emotional songs. The two of them performed his song “Say So”. And then Liahona spent the entirety of the song looking at PJ.

This would normally be a drawback. But luckily it wasn’t a problem with this song because she was connecting with PJ and the audience felt it. The judges all enjoyed this duet. They said it was radio-ready and Katy also added how much she likes Liahona’s makeup tonight. The night continued with Ava August. She was the youngest person in the competition at fifteen and she performed “Drivers License” by Olivia Rodrigo for her solo. Ava’s second performance was the duet with Josh Groban. They performed “Both Sides Now” by Joni Mitchell and it had been great. It was great because they worked out most of the kinks during practice. Josh had been critical of her back then because he knew she has a unique voice and he thought she was holding herself back. And now she was putting that voice to good use.

Next up was Caleb Kennedy. He was one of the few country musicians still around and tonight he got to work with one of his idols. He got to perform with Jason Aldean. The two had a duet together and it came after Caleb performed “Midnight Rider” by the Allman Brothers Band for his solo. Except his duet was one of the rare times Caleb performed without his guitar. He performed “Fly Over States” and it was Jason who played the guitar. Caleb was so used to playing his guitar on stage because it gave something to hide behind that he had to come out of his comfort zone to perform his duet. He suddenly had to realize what to do with his hands and so he swayed. He didn’t dance because what he did wasn’t dancing. It was more swaying back and forth.

Hunter Metts went next. He performed “Chandelier” by Sia and he did his own rendition of it. It was an upbeat song but he made it slower and it sounded more intimate that way. Hunter also performed his duet with Jewel. They performed her song “Who Will Save Your Soul” and Jewel pushed him into doing something big. He originally wanted to play something just under her part. But she hadn’t liked the idea. She wanted him to stand out on his own and he eventually did with the rendition they agreed on. It just wasn’t enough for the judges. The judges all said that Hunter didn’t give them what they were looking for and they thought he might have been nervous about his performance beforehand. He has had to watch as practically everyone else went and so that could have messed with his head.

Jewel didn’t see what the judges were talking about. She thought Hunter did better than they were letting on and so she had a small pout backstage. Next up and the last performance of the night was Casey Bishops. She performed “Decode” by Paramore. She also had a duet with Brandon Boyd. They performed “Wish You Were Here” and, during practice, he said he needed more help with this song than she did. And it is his own song. Casey has a wonderful voice and she could be the frontperson of any rock band she desires. And that was Brandon Boyd saying that.