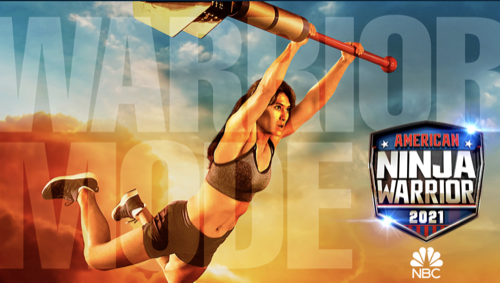 This season there are four new obstacles, including Overpass, Split Decision, Tipping Point, and V Formation in addition to the iconic Warped Wall.”

In tonight’s American Ninja Warrior premiere episode, American Ninja Warrior is tapping into the fountain of youth. For the first time, the teenagers are graduating to the big show and will be able to compete with the grownups. There were new faces this year. They will be competing against seasoned veterans and so the best of luck to everyone. The show was back in Tacoma for the Qualifiers. Up first was Kid Owhadi.

He was the new kid three years ago back when they lowered the age to nineteen and he was a part of the Houston Ninjas. Kid was the first to work on this new obstacle course. There were four new obstacles out of the six and one of them was even a choice. There were two balance obstacles. The ninjas get to pick which obstacle they wished to try and unfortunately Kid made the wrong choice. He fell on the balance obstacle and there went his chances this season.

Next up was Sophie “the beast” Shaft. She was the first 16-year-old to run the obstacle course tonight and she was known as “the beast” because she was incredibly strong. She could lift over five hundred pounds. She was on the short side as just being five feet tall and yet she was forced to be reckoned with. Sophie chose the other balance obstacle after seeing Kid fall. She made it past balance obstacles and she fell on the Tipping Point.

Which was the fourth obstacle. Sophie will have to wait and see at the end of the night before she finds out where she made it into the City Finals. Next up was Ernesto Perez. He was dressed as a superhero because he alter ego is Flybird and Flybird fights against bullying. Perez was bullied as a child because of his nose.

His nose is on the larger side. It also shaped as if he has broken it and he didn’t break it. Perez was teased about that. He started making videos to help other kids heal after bullying and now he was Flybird. Flybird was the first in his family to graduate high school. He’s now the first Ninja as well. Flybird was doing really well on the obstacle course and it wasn’t until he reached the Tipping Point that he fell.

Flybird will have to wait and see before he finds out if he made it into the next round. Next up was Sam Sann. He was a familiar face on the course because he used to run it some years ago and then he took time off and now he’s returning as one of the oldest ninjas. He’s in his fifties. He runs the course because he hopes the siblings he hasn’t seen since he was five will recognize him.

Sam did really well on the course. He made it the furthest than everyone before him and he fell on the fifth obstacle. He fell on V Formation. V Formation is also a new obstacle. It looks crazy difficult and who knows who will be the first to pass it. Next up was Adam Naids. He was the Astronaut Ninja. He specialized in aerospace and he helps design the uniform that real astronauts use to go into space. Adam was happy to be representing the space nerds of the world. His words. He also showed great promise as he made it through the first few obstacles. Adam made it to V Formation like only three ninjas before him. One being Sam and the other being someone that had their run during the commercial break. And so it was unfortunate when Adam too fell on the fifth obstacle.

Next up was Elijah Browning. He was another teenager. He was sixteen and he was also an entrepreneur. He sells sports cards. He buys them cheaply. Holds on to them until the market is hot and then sell them at a higher price. Elijah was known as “the boss”. He has his own business and he was also a proven leader. Elijah was one of the Houston Ninjas. He trained with some of the best ninjas in the game and it showed. Elijah was amazing on the obstacle course. He became the first to make it past the V Formation and he was also the first to hit a buzzer for the night. The first and the youngest ever in the competition. Elijah made history. The next ninja is Jonathan Horton. He’s an experienced ninja who has competed six times before and who has never made it to Las Vegas.

Horton is an Olympian. He won a medal for gymnastics and he’s back this year hoping to get to Vegas. But unfortunately, Horton fell on the Tipping Point. He’ll have to wait and see like all the others. Next up was Isabella Wakeham. She was another rookie this season. She was seventeen and she was competing with her older brother Isaiah. The two of them train together. They’ve been training for years since they were practically babies and so tonight was a culmination of all that hard work. Isabella went first. She had a great run and she put herself in first place among the women as she made it to V Formation. She sadly fell on that same obstacle as well. She has a good chance of making it into the next round and it really just depends on how the rest of the women do for tonight.

Isaiah went next. He too had a great run and he fell exactly where his sister fell on the V Formation. Next up was Barclay Stockett. She was a veteran ninja. She has run the course for years and she was in mourning this year because her mom died less than a year ago. Barclay actually didn’t compete last year because she wanted to spend time with her mom. It’s been difficult for her to live without her mom and it was clear on her face that she was still grieving. This also explains her poor showing tonight. Barclay fell on the second obstacle. She just wasn’t at her best to perform and so some time away from the game will help her heal. Next up was Jonathan Godbout. He was sixteen and another fresh face for the course.

Jonathan was a drummer. He used to drum with a bunch of pots and pans until his family gave in and got him a drummer set. Now, they have to wear noise-canceling headphones while Jonathan practices with his brother for their band known as PB & J. Jonathan devotes his time to ninja training when he isn’t playing drums. He now believes he’s ready for the course and he was. He did really great on the obstacle course. He sailed through it and he was the second person to make it past V Formation as well as the second person to hit a buzzer. Jonathan was making it to the next round. Over the commercial break, there was the third finisher and so now the number is up to three people who have hit a buzzer so far.

Next up was Caleb Dowden. He was from Missouri and his family has been farming for four generations in a small town. Caleb wants to carry on the tradition of farming but he’s competing against bigger dairy farms and the price of dairy has gone down and so his farm was struggling. Caleb would really like that one million dollar grand prize. He did amazingly well on the course and he made it as far as V Formation before he fell. Caleb’s timing as well as how far he made it on the course will mean he’s got to go to the next round. Next up was Lindsey Eskildsen. She was one of the game’s top competitors for a while and then she took some time off to start a family. She’s now the mother of two. And her latest baby was born less than four months ago.

Having two kids under two has been hard on Lindsey. She has had to get creative about how she trains and that sometimes means she can only work out at 11 at night. Only she showed how amazing moms can be on the course and while she didn’t make it to the buzzer – she did make it far enough fast enough to make it to the next round. Next up was Isaiah Thomas. He was the youngest in the competition at fifteen years old and he was also a Mommas Boy. He was especially close to his mom. He helps around the house and he still finds time to train between that and school. Isaiah was known as FlyBoy for his ability to seemingly fly through air when he’s on the course. Isaiah definitely flew through the course tonight.

He sped through the obstacle course tonight. He went all the way to the Warped Wall where he became the first to attempt the Mega Warped Wall but unfortunately, he didn’t make it and so he hit a buzzer on the regular Warped Wall. Isaiah made history as the youngest person to ever hit a buzzer in the game. He also finished with the fastest time so far and so he’s clearly a threat in the game. Next up was Daniel Gil. He was an incredible ninja veteran who came close to winning the last million-dollar prize and so chances were high for him to make it to the next round though shockingly Daniel fell on V Formation. He’s never fallen on a qualifying event. And so that one was going to have people reeling for a while.