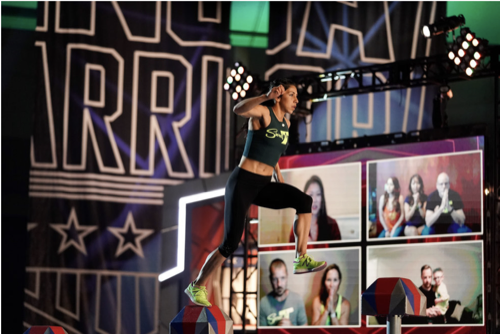 In tonight’s American Ninja Warrior episode, it’s the second night of the Qualifiers. American Ninja Warrior was still in Tacoma and they couldn’t wait for even more of the teenagers. The age of requirement has been lowered to fifteen. There were more teenagers than ever this year and they were all running the obstacle course tonight. For tonight, the obstacle course is Shrinking Steps, Weight For

It, Split Decision in which they have to decide between Broken Bridge or Tipping Point followed by V Formation and Warped Wall/Mega Wall. Up first was Jon Bundy. He was known as the Eye Ninja because he was an optometrist. He travels the world helping people see and recently his wife was diagnosed with MS. Bundy was also known for wiping out on the first obstacle. He overcame that tonight. He made it all the way to the fourth obstacle when he fell.

Zhanique Lovett went next. She fell on the Burn Rubber the last time and so now she faces of the decision of facing her fears or running away from them. She chose Burn Rubber again in the Split Decision. She took it on and she beat it this time. She made it past Burn Rubber. She was on V Formation when she fell.

Her run was still impressive and it could still get her to the Semi-Finals. Next up was Julius Ferguson. He was welcomed by the ninja community because when one of them heard that Julius was homeless – they stepped in. Dan Champagne was a close friend of Julius. Julius later told him about his homelessness and so Dan took him in. he helped Julius find a new home. They bought a van. Julius loves living there because he wants to live sustainably and so it was a perfect fit.

What wasn’t the perfect fit was V Formation. The last obstacle before the Warped Wall was a tough one and Julius ended up falling because he kicked one of the pieces with his foot and that meant it was still spinning by the time he needed it to hold his body weight. He fell on V Formation.

He’ll have to wait and see if he made it far enough fast enough to make it into the next rounds. There was a slew of ninjas that went over the commercial break and they won’t be remembered because none pressed a buzzer. The first ninja that was showcased after the commercial break was Dan Champagne. He was the kind-hearted man who opened his home for a homeless friend. Dan was a CPA. He helped people with money planning and it’s what he did for his friend as well. Dan was methodical on the course.

Dan made it past the V Formation. He next had to make it up the Warped Wall and, while his first try was defeat, his second try helped him to become the first ninja of the night to press a buzzer. Dan was so thirsty afterward. They asked him if he wanted champagne and he said he settle for water. There were more ninjas going during the commercial break. None of them pressed a buzzer and so none of them will be remembered.

Next up was David Payne. He won a silver medal in the hurdles in the 2008 games and now he a track coach. He fell before it could truly count and so he will not be making it into the next rounds. Then there was Sarah Shang otherwise known as Dr. Sparkles. She’s studying to be a dentist. She wishes everyone takes teeth to care seriously because she wishes to be a dentist like her father and so she smiled the whole time she was on the course.

Those perfect teeth were highlighted. They also had a washing because Sarah fell on Tipping Point and she was forced to swim. Next up Josiah Pippel. He was young but he was making a name for himself as the lizard ninja. He has five different reptiles in his bedroom alone and he likes them so much because they’re misunderstood.

People tend to judge them as slimy when they were in fact very cool. Josiah now says he’s very cold-blooded just his lizards and he was the youngest person on the course. He was just fifteen. He was also quite tall and he sailed through the course. He also tried the Mega Warped Wall and he failed and so he pressed a buzzer on the Minor Warped Wall. He was the second finisher of the night. Next up was Rylie Johnston. She was a teenager and she was competing alongside her father.

Rylie’s first time on the course was seeing it from the sidelines as her father ran it. She actually fell asleep before she could see his run because it had been past her bedtime and now look how far they’ve come. Rylie trains with her father. He pushed her to go for more training and he’s a tough training coach.

Rylie wanted to make him proud by pressing a buzzer. She made all the way to the fourth obstacle when she fell and so it was a disappointing end for her. Next up was Lance Pekus. He was the Cowboy Ninja and he a veteran of the course for ten years. He gave the course everything. He raced through it and everyone knew he meant business if he took off his hat or his shirt and he did both on the course. Lance was doing well until V Formation. He fell and he fell directly on his back. And so that has to sting.

Lance was nursing his back as another baby-faced ninja had his turn on the course. Next up was Kaden Lebsack and he’s been doing really well on ANW Juniors. He came in second in the last competition. He’s also been competing against the likes of Jake Murray in local games and so the course tonight couldn’t hold him back. Kaden raced to the buzzer on the Warped Wall and he hit with the fastest time in the competition.

Over the commercial break, there had been a finisher. That raises the number to four and everyone was hoping there would be more by the end of the night. Next up was Tiana Webberly is otherwise known as “Sweet T”. She’s a seven-time veteran and she hit her first buzzer last season. But she won’t hit a buzzer tonight. She fell on the fourth obstacle and will have to wait and see if she makes it into the next round.

He was the last teenager of the night and his days start early. He has to wake up to take his little brother to school. He also has to give himself two hours to travel to school for himself. Xavier’s days are busy. He packs them with activities as well as with training. Xavier is hoping all that loss of sleep would lead to a buzzer tonight. He started out great on the course. He was racing through and he was doing fine until he fell on V Formation. Xavier made it far enough fast enough to make it to the next round and so he’s good.

Over the commercial break, there was one finisher and he had an impressive run. Next up was Sandy Zimmerman and she was Mama Ninja. She was the first mother to ever hit a buzzer. Sandy has had a tough few seasons. She’s even had surgeries on her knee and yet she was back tonight ready to hit a buzzer for mothers everywhere. Sandy sailed through course. She made it all the way to V Formation when she fell. She didn’t get her buzzer only she was going to make it to the next round based on her performance tonight. Then there was Lucas Reale. He’s newly engaged and it pushed him to hit a buzzer tonight.

Joe Moravasky was the last one to have his run tonight. He stormed through the course with a plan in mind and he made it all the way to the Mega Warped Wall where he pressed the buzzer and got an additional ten grand.