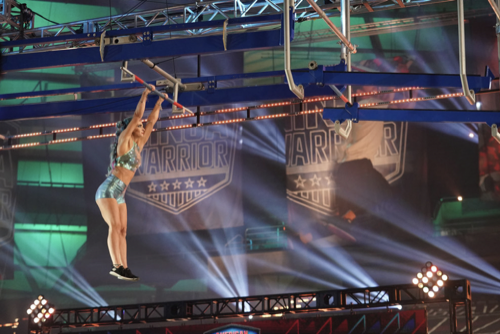 In tonight’s American Ninja Warrior episode, the night was full of spectacle. They had two new obstacles called Air Surfer and Pretzel Twists and the first person to try out the new obstacle course was Hector Gomez. He was a Puerto Rican pro wrestler. He was used to playing to the crowds and he sure did that tonight. He sailed through the first obstacle.

He then flexed before moving on to the second and he was blowing kisses by the time he was done with that one. Hector made it all the way to the Air Surfer before he fell. He could still make it to the next round if he went far enough fast enough but he won’t know until the end of the night. Next up was KC Boutiette. He was known in the ninja community because he created custom-made shoes for most of them and so a lot of them as well as the Olympic community was cheering him on because he was an Olympian on top of everything else.

KC often repeated his catchphrase of “boo-yah” as he sailed through the course. He was the first person to reach the fifth obstacle and unfortunately, that was the same obstacle he fell on. He too would have to wait until the end of the night to see if he made it to the next round. Next up was Megan Budway.

She was an elementary music teacher. She was also a classically trained opera singer and she was used to singing the highest parts and so heights didn’t frighten her. Megan sailed through the first obstacles. She made it to Air Surfer and unfortunately, she just didn’t get enough distance to make it off the obstacle. Next up was Brandon Mears. He was a ninja veteran and lately, he’s been cursed by balance obstacles.

He’s fallen on balance obstacles every year since 2017. It just kept getting the better of him and so he changed up his routine. He did everything to practice. He also had to choose which balance obstacle to go on and his son helped him decide to try out the spinning log. Brandon ran out on the obstacle.

He was almost off it when he once again fell on the Spinning Log. Brandon was so disheartened that he discussed pulling the plug with Zuri and so this might be his last year because he couldn’t take all the falls and he couldn’t make it past the balance obstacle. Next up Owen Dyer. He was the first of the teen competitors tonight and he was fifteen. He practiced often with his kid brother and maybe one day his brother will become a ninja as well.

Owen had no problem at the start of the course. He easily sped through it and at one point the commentators stated he was flying through everything. Owen made it to the fifth obstacle and he became the first to figure out the Pretzel Twists. He was also the first of the night to make it to the Warped Walls. He went after the minor and he got it on his second try becoming the first finisher of the night. The rookie put everyone to shame by becoming the first. Next up was Alyssa Varsalona. She completed two seasons ago and she had some success but she was back this year and she was competing against her husband. They’ve turned into a friendly competition. Her husband started working out with her and now they have a bet on who’s going to win.

Alyssa is a trained gymnast. She’s an incredible athlete and she showed that on her run. She sped through the course and she made it all the way to the Pretzel Twists when she fell. That obstacle is particularly hard. Only one person managed to make it past this far into the show and so Alyssa wanted to see how far her husband will go. Next up was Brad Giles. He was a successful entrepreneur and he sells health items and he was also known for giving back.

He and his friends once walked into a supermarket and said it’s all on them. Now, a storm warning cut off Brad’s story and so there were probably more incredible things he’s done but sadly no one who lives in the thunderstorm warning area will know about them. By the time the show picked up again, Brad was at the Pretzel Twists. And then he fell on the Pretzel Twists.

Next up was Bootie Cothran. The 52-year-old was one of the oldest people on the obstacle course and this hardcore veteran ended up falling on the balance obstacle. The balance obstacles were the worst. They knocked out some of the best ninjas. Next up was Austin Hair. He too trains with his wife and they had to stop once they found out they were pregnant. His wife is at home taking it easy while Austin was running the course but another weather update prevented many from seeing the outcome of Austin’s run. Next up was Bryce Buckland.

He was very emotional this year because he was running in honor of his late father. His father was diagnosed with cancer when Bryce was thirteen and so he had to watch for years as his father fought to stay alive but he ultimately died in 2020. And so his son was running in his honor.

The number was at least up to five or six when Brett Hernandez Strong. He was a boy scout who dreamt of becoming a pro baseball player and in the meantime, the teenager did a lot of mountain biking. Brett took everyone by surprise when he sailed through the course and he made it to the Mega Warped Wall where he made it to the buzzer and instantly won ten thousand dollars. He was officially the rookie of the year.

Next up was Charity LeBlanc. She adopted the mermaid persona for her fitness and makeup videos and now she’s the mermaid ninja. Charity and her family have sold their possessions and now live on a boat. The children have adapted quite well to it. It also taught Charity a few things and now she was ready to show that off on the show. This was Charity’s third year. She wanted to be able to make it to the next round and she did that with her run tonight. Charity was one of a handful of women to make it to the Pretzel Twists and sadly that’s where she fell. She was a little too short to have made the jump and so that’s how she ended up falling. Next up was the Island ninja. Grant McCartney was fast friends with the Eskimo ninja and they both train in each other’s habitats and now they’re best friends.

The two men push each other to the next level. Grant went swimming under the ice for his friend and he trained for that by taking ice baths. Grant is a committed ninja on the course. He was also known for being fun and tonight he was a little more serious. Only it didn’t help because he fell on the fourth obstacle. Grant has to wait until the end to see if he will make it to the next round and so up next was the Eskimo ninja Nick Hanson. He sailed through the course and then he made the same mistake as his friend. He too ended up falling on Air Surfer. The friends are in the same position and they’ll have to wait until the end to see if they make it to the next round. Next up was Vance Walker.