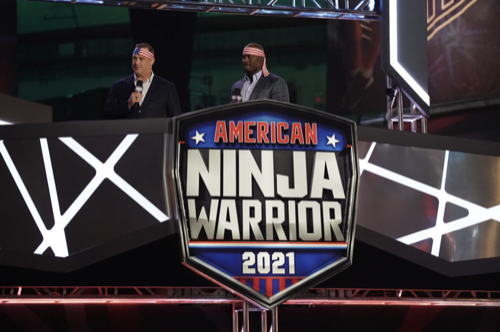 For the first time, competitors as young as 15 compete and will face up to six challenging obstacles, including new obstacle Double Down in addition to the iconic Warped Wall.”

It’s another night of Qualifying. Thus far it’s been the teenagers that have come out and truly impress. However, tonight that might all change. There were plenty of veterans there tonight and they’ve been training all year for a night like this. The first ninja to run the course was rookie Stephen Edwards.

He was the tallest man there tonight and he was also the father of four. He races car for a living and he was doing great on the course as a first-timer when it fell apart on the balance obstacle. He stumbled midway. He tried to get back up and slipped and fell in the water. This was it for him and unfortunately, he will not be progressing to the next stage of the competition. Next up was Addy Herman. She trains with Taylor Johnson.

Addy and Taylor have become best friends. They not only trained together but they also did everything else together as well and the veteran truly helped the fifteen-year-old reach her full potential. Addy raced through the course. It became quite clear early one that she was full of vigor and she almost became the youngest female to press a buzzer when she fell on the fifth obstacle. The fifth obstacle has taken out veterans.

The Pretzel Twist was hard to defeat and the next few ninjas never even got close enough to the obstacle in order to defeat it. Melissa St. Vil went next. She was the female boxing champ and there have been a number of female fighters who have tried to cross over. They all fell on the first obstacle and the same became true for Melissa as well. Maybe it’s a curse.

Next up was Gunag Cui. He was an MIT student and he was here to live down the stereotype. He was a brilliant Asian young man and he plays classical music when he wasn’t studying to become a computer engineer but he was also a rapper and now he’s a ninja. He was doing well. He was speeding through the course when he came to struggle on Air Surfer.

He couldn’t self-correct. He fell and he will have to see if he made it to the next round. Next up was Jay Lewis. He was seventeen and he and his best friend Blake were both in American Ninja Warrior. They lived two houses down from each other and so they can see when the other is training and join them. Jay went first and the obstacle course was easy for him. He didn’t slow down or hesitate and he went on to become the first finisher of the night.

Blake Feero went next. The best friend was shaping up to be a strong contender when he overshot on Air Surfer and he fell. Next up was Paul Fisher. He grew up in the Amish community and he was a barn builder. He and his best friend Ivan King who was also former Amish have created their own ninja gym in one of their barns.

They also do cross-fit and run marathons together. They didn’t grow up with a television and so competing on television was the coolest thing to them. Paul went first. He raced through the course and he showed incredible control. He was very strong and he almost had Pretzel Twist solved when he accidentally lost the grip in his left hand and he fell. Paul did great as a rookie. It was now up to his best friend to see if he could finish it.

Ivan King went next. The twenty-nine-year-old was sailing through the course when he fell on the balance obstacle. Next up was Nate Hansen. He was one of the breakout stars last season and his story of overcoming a growth deficiency earned him a lot of fans. He was 5’2. He was one of the shortest ninjas on the circuit. He connected with future ninjas who suffered the same condition as he did and they watched on as he became the second finisher of the night with the fastest time so far. Hansen was a speed demon. His time will be hard to beat and many ninjas tried to break it. Next up was Adam Rayl. He was a former gymnast and six-time veteran. He went on to become the third finisher of the night.

Next up his roommate Sean Bryan. The Papal Ninja sped through the course and he went on to have the fastest time by beating Hasen’s time. Next up was Andrew East. He was a former football star who made it to the NFL and then he was introduced to ANW. It’s been a great transition from football. He also married an Olympian gymnast. His wife Shawn watched in the commentator booth as Andrew sped through the course and he was going well until he made it to Air Surfer.

He fell on that obstacle and it was okay because he made it farther than he thought possible. Next up Abby Clark. She was a four-time veteran and her boyfriend and even her dog run obstacle courses. Abby trains with both. She takes pride in both and now she wants another buzzer. She was an All-American gymnast in college and she looked strong at first.

Abby did wonderful on the course. She had no problem with the beginning of it and she went far enough fast enough to make it to the next round but she failed to make it past the Pretzel Twist. Next up was Brian Kretsch. He was a thirteenth-time veteran and he overcame his fears of the balance obstacle to make it to the Pretzel Run where he fell.

Then came the Godfather. David Campbell ran the course and he went on to become the fifth finisher of the night and so the veterans were kicking butt tonight. Next up was teenager Caiden Madzelan. He grew up in Troutdale and it was a great place to go hiking and not many people around are interested in ANW. It’s why he became known as the Troutdale Ninja. There’s even a day named after him. And Caiden’s biggest fan is his dad.

Caiden and his dad didn’t get along after his parents split. They were constantly arguing until his dad saw how interested he was in becoming a ninja and he built a ninja obstacle course in the backyard. Caiden raced through the course tonight. He went on to become the sixth finisher and he almost made it up the Mega Warped Wall.

Over the commercial break, there was the seventh finisher. There were also several notables who made it to Pretzel Twist and who fell on it. Next up was Quinn Nguyen who builds drones and who flew one over the obstacle course. Quinn was able to map it out for himself. He then ran the course and it looked easy when he did it. He was downright having fun when he too fell victim to the Pretzel Twist.

Next up was Ethan Swanson. The Swan flew through the course and it had looked like he would get the fastest time but he fell just short of that goal by one second and he still ended the night as a finisher. Next up was Meagan Martin. She won the women’s championship and now she was going to be the Climbing Analyst for the Olympics. Meagan was a climber.

She went from that to ANW and it’s been a great transition so far because she really is in the lead among the women. Meagan was very strategic with her moves. She pushed Alyssa Beird out of the competition by making it pass the Pretzel Twist and she went on to become the first woman finisher of the night. And so no wonder she became the women’s champion.

Next up Jack Murray. He was the fastest ninja around and he wanted to finish with the fastest time tonight. He was a veteran. He knew the course better than anyone and Murray barely touched the obstacles because he was moving so fast. He sped through all of it. He became the finisher with the fastest time and it was a shock to no one.