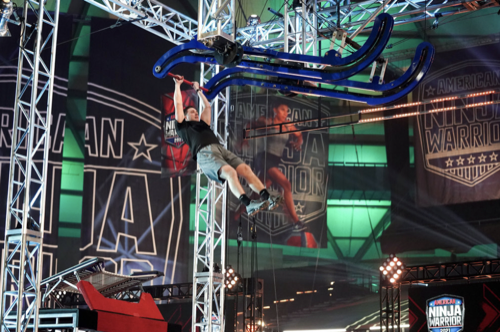 For the first time, competitors as young as 15 compete where they will face up to six challenging obstacles, including new obstacle Tilt A Whirl in addition to the iconic Warped Wall.”

In tonight’s American Ninja Warrior episode, it’s the final night in the historic Tacoma Dome. This is it. This was the final chance for competitors to earn a place in the Semifinals and some of the greatest of the Windy City ninja competed tonight. First up was Leif Sundberg. He was known as the Swedish ninja.

His family immigrated from Sweden when he was little and he still competes with the Swedish flag. He was also known as the fastest ninja in the competition. He holds the world record of completing the course in under a minute and he finds he uses less energy by never slowing down. Leif tried to keep that momentum tonight but a split decision slowed him down. He had to decide which balance obstacle to taking and he almost fell on Spinning Log.

Leif dangled over the water for a while before he pulled himself up. He used a lot of energy on that and so he didn’t have enough energy to finish the course. He fell on the fourth obstacle. He has to wait and see if he makes it into the Semifinals. Next up was Megan Rowe. She was the ninja with the ax.

As in she carried around an ax because her favorite thing to do is going ax throwing and she loves it so much that she does it all the time. Megan was also a gymnast for ten years. She’s a barista now and she still is a credible competitor. This is her sophomore year. She’s dating her fellow ninja and she was the first to make it past the fourth and newest obstacle. She sadly fell on the fifth obstacle only it might not matter.

Megan moved fast. She also made it quite far and the top five-woman go to the next round. Next up was Abby Steffl. She was one of the most motivating ninjas and she gets her strength from her kids. Abby’s daughter Molly was born needing multiple surgeries. She eventually got better only to learn she has alopecia and her daughter Molly was such a positive little girl that she gave her mother strength.

Abby’s children are interested in the Ninja community as well. They compete and Molly will be competing on Ninja Junior in the fall. Abby is also the oldest woman tonight and she started off strong. She made it as far as the fourth obstacle known as Tilt-A-World when she lost her grip just as she was about to dismount.

Next up was Flip Rodriguez. The eleven-time veteran is famous on the court and this year his protégé was even competing. Flip welcomed the youth invasion. He started as a twenty-one-year-old and he used to wear a mask to cover his face so that people didn’t recognize him as he spoke of the abuse he suffered as a child. Now he shows his face proudly. He also takes his time on the course and so once again he was doing amazingly but then he fell. He fell on the fifth obstacle. Depending on how many finishers there are, there’s a good chance that Flip will make it to the Semifinals. Next up was his protégé Cal Plohros. He sped through the course and he became the first finisher of the night.

Cal was the first to make it to the buzzer. But will he be the last? A series of ninjas competed after him and none made it past the fifth obstacle. Next up was Nathan Green. He and his twin brother Marquez were competing tonight and they have a side wager going. Whoever loses in the farthest the fastest will have to shave his head.

Marquez made it to the fifth obstacle. Nathan fell in the exact same spot on the exact same obstacle and unfortunately, he was slower than his brother. So now his head will be shaved. He shaved it over the break and when the show came back it was Jackson Twait’s turn on the course. He was the cat-loving/scooter driving ninja and his training partner is his cat Hashbrown.

There was once a different cat. Twait, unfortunately, lost him and never got him back but he found Hashbrown at a cat café and they’ve been training together ever since. Twait was a part of the new ninjas from Iowa. He was also really fast because he sped through the course and he chose to go up the Mega Warped Wall. He succeeded and instantly won an extra ten thousand dollars. He was the second finisher of the night and that was already an hour in.

Who will be the next finisher? Jeremy Rahn ran the course during the break and he became the third finisher. There was also a fourth finisher while they were at it. The show resumed with Maggie Owen. She was a Chicago teen whose been training with Flex LaBreck.

Maggie also was on Ninja Jr twice. She’s been competing for a while in the lower competitions and training with one of the best had helped prepare her. Maggie made it all the way to the fourth obstacle when she fell. She has to wait and see if she made it far enough fast enough to earn a spot in the next round. Next up was Chris Behrends. He was a part of this new batch of ninjas coming out of Iowa and he and his best friend were known as the Ninja teens.

They were both twenty now and they picked the name before their latest birthday and before they found out they would be competing with actual teenagers this year. And still, in spite of that, Chris did incredibly well for himself because he raced through the course and became one of the few finishers for tonight.

The Iowa Ninjas have been showing their talent all night. Next up was Kyle Schulze. He was known as the Deaf Ninja because he has a hearing impairment and he was also known for being cursed. He was cursed to fall on the fifth obstacle. He always falls right before he’s supposed to dismount and so he was hoping tonight will be different. Kyle was doing well but he kept landing on his arm and it appeared he injured his shoulder.

His shoulder gave out on the fifth obstacle and so sadly he didn’t get to complete in the course. Tonight was also host to a father/son team. The father was Brian Beckstrand and he pressed a buzzer and so his son Kai who was also rocking a matching mohawk had wanted to be a finisher as well.

Kai has been competing on Ninja Jr. He even won the first season and now he works out on the obstacle course his father built in the backyard. Kai must have been doing something right because he ended up completing the course with the fastest time so far. Next up was Jesse LaBreck. She was a ninja trailblazer by becoming the third woman to complete an extended course and she’s don’t that several times now. Jesse is an amazing ninja.

She made it through the course and she hit her 8th buzzer tonight. She is just one of two women who have hit a buzzer all season and so hopefully that will change with the Semifinals. There were a series of finishers over the course of the commercial break.

Next up was Michael Torres. He was doing well and showing everyone he’s an amazing athlete when he fell on the second obstacle. No one saw that coming. The whole crowd was silent as they took in the bittersweet moment of Michael failing to finish the course. And even Michael appeared to be crying in the water where he fell.