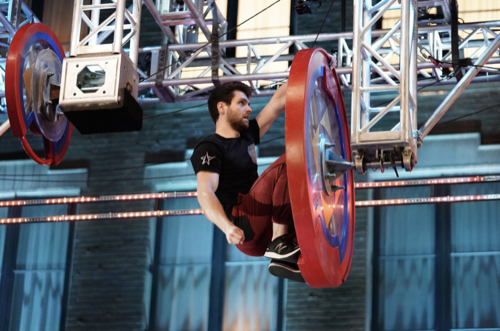 For Split Decision, ninjas must choose between an upper body and a balance obstacle. The top two competitors will face off on the Power Tower where the winner will earn a Safety Pass for the National Finals.”

In tonight’s American Ninja Warrior episode, it’s Night Three of the Semi-Finals! Up first was Sean Bryan otherwise known as the “Papal Ninja”. He works for the catholic church and he just opened up a ninja gym in a low-income neighborhood of Richmond, California. Sean would love nothing more than to make it to the Power Tower.

The two fastest of the night will be selected to compete against each other in the Power Tower and the winner will score the Safety Pass. The Safety Pass will be something to save them if they fall later on. Everyone wants that pass and Sean most of all. Sean injured himself on the course tonight. He hit his head and he had a terrible gash that was bleeding into his eye and he ignored it in order to race through the course.

Sean did pause for prayer. He sorta needed it before he climbed up the Spider Trap and the prayer worked. He became the first finisher of the night. His run was epic and it was pretty hard to beat. Next up Francisco Barajas. He’s called the “One Percent Ninja” because he’s part of the one percent that stutter and it’s become a great spokesperson for the speech impediment.

He has great friends. He also had an amazing family who supports him and they watched on as he ran the obstacle course. He made through the first half in spite of almost falling on the balance obstacle. He fell on the Padlock. He will have to wait and see if he’ll make it to the next round. Next up was Enzo DeFerarri Wilson.

He was young. He was fifteen. He was one of the fresh-faced ninjas this year who competed after the age limit was lowered and he was the youngest person to hit a buzzer. He was also noted for his speed. He was fast. He’s been competing on the Junior level and so now he’s been blowing everyone away at the adult level. Enzo sped through the course.

He, unfortunately, was going too fast that he couldn’t stop himself when he was on Padlock and so that’s when he fell. He too has to wait and see how he’ll do compared to everyone else but he lost out on the Power Tower. Next up was David Campbell. He was known as the Godfather because he competed on every season of the show and unfortunately he fell during the first half after taking too many hits to the head that he was woozy from the blood loss. And fell into the water.

Next up was Nate Pardo. He was a new face as well this year and unfortunately, he fell on the balance obstacle. Next up was Brittney Durant. She’s an entrepreneur. She operates her own business because she took inspiration from her mother who herself owns her own business and so now she sells gear. She shells t-shirts and hoodies. She also makes her own website and speaks with manufacturers.

Brittney hopes to inspire other young girls with her story. She also increased her brand and so it was unfortunate that she fell on Drop Zone. It was her best run so far and so she too has to wait and see if she’ll make it to the next round. Next up was Josiah Pippel. He was wearing the t-shirt of his mentor Najee Richardson and the two of them have been training for ten years.

The training showed as he sped through the course. Josiah was going so fast that he was faster than Sean Bryan and he made it all the way to the end when he became the second finisher of the night. He was fifteen and he was one of the youngest members to hit a buzzer at this stage. Next up was Megan Rowe. She was the ax-wielding ninja. She also makes custom earrings and she usually takes inspiration from the obstacles courses she runs across. She also had one of her best runs so far.

She made it to the Warped Wall and to the second half. She was speeding through when she fell but she went far enough fast enough to make it to the next round in the women’s division. Megan was so happy about how far she made it that she didn’t even mind that she got hit in the head.

A lot of the ninjas were getting hit thanks to an obstacle known as Drop Zone. It keeps getting them and sometimes they get injured twice on the same obstacle. Next up was Adam Rayl. He started his run during the commercial break and he was speeding his way through by the time the show caught up with him.

Adam, unfortunately, took too long in deciding which obstacle he wanted to go through on split decision and so he missed out on beating Sean Bryan’s time. Adam was the third finisher of the night. Next up was Joe Gomez. It was a special night because it was his birthday and the security expert managed to keep up with teens half his age when unfortunately he came across Drop Zone. He fell on that obstacle and that was it for him.

Next up was Vincent Pane. He was a Ph.D. student at Stanford and he was a man of all trades. He was a chemist, tailor, artist, and even a dancer. He designed the suit he was wearing which stood out. Vincent was a part of Northern California ninjas and they showed their support for him tonight. Vincent stripped off his jumpsuit. It revealed how shredded he was.

He, unfortunately, fell during the second half of the obstacle course and so he’ll have to wait and see to find out if he made it to the next round. Next up was there was a gender reveal on the show. Florida’s Austin Hair and his wife gave the show the first gender reveals and Austin soon learned he was going to be a girl dad. Austin hoped to hit a buzzer tonight but unfortunately, he fell on the balance obstacle.

Next up was Meagan Martin. She worked as a commentator during the Olympics and that all thanks to “American Ninja Warrior”. It’s been eight years since she began competing. She was the Women’s Champion. She was also fierce competition as she raced through the obstacle course and managed to make it all the way to Padlock where she fell. Next up was Vance Walker.

He was another baby-faced teenager and he was known for never falling on a course but everyone wanted to see tonight if he could handle it in the big league. Vance was friends with a lot of the adult ninjas. They’ve stayed at his house and they’ve tried out his personal ninja structure in his backyard. They all love it there. Vance hopes to build a bigger structure if he wins the show this year and it has great odds

Vance sped through the course. He was the fastest ninja so far and he was the ninja with the fastest time by more than a minute. He, therefore, became eligible for the Power Tower. Next up was RJ Roman. The “Heavy Metal Ninja” was a rocker known for speed and unfortunately, his choice in split decision landed him in the water. He still made it far enough fast enough to make it to the next round. Next up is the race to the Power Tower. Vance Walker against Josiah Pippel. They were both teenagers and so the young guns competed against each other.

They both raced through the course. They both did everything possible to beat the other but, in the end, it was Vance who won the Power Tower and earned a Safety Pass.