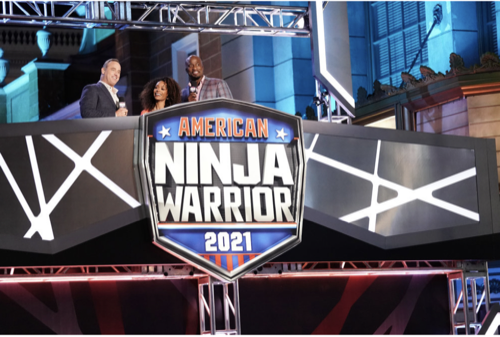 Tonight on NBC their obstacle course competition American Ninja Warrior returns with an all-new Monday, August 23, 2021, episode and we have your American Ninja Warrior recap below! On tonight’s American Ninja Warrior season 13 episode 9 “Semifinals 4,” as per the NBC synopsis, “The semifinals conclude in Los Angeles as competing ninjas face up to 10 challenging obstacles; for Split Decision, ninjas must choose between an upper body and balance obstacle; the top two runs of the night will face off in the Power Tower.”

In tonight’s American Ninja Warrior episode, it’s the last night in Hollywood! It’s the final night of the Semifinals and up first was teenager Devan Alexander. He had the loudest cheering section because no one could stop his mom. His mother’s name is Pow and that’s her personality. Even she said so. She was a former gymnast and she likes that Devan is following in her footsteps by being an athlete. Pow has supported Devan through training. She also hypes him up when he’s just doing the dishes and so Devan was a little embarrassed, but he has a mother who loves him no matter what and she cheered him on as he raced through the obstacle course. Devan made it all the way to the ninth obstacle when he fell. He will have to wait and see if he made it far enough fast enough to make it to the next round.

Next up was Nate Hansen. He was the Gnarly Ninja and he was known for being a spokesperson for his growth hormone deficiency. Nate was a short young man. His deficiency stopped him from reaching more than 5’2 and so now he helps young kids with the same condition. He serves as an inspiration to them. He’s someone they can look up to and he travels around the country speaking with ninja hopefuls to offer up his personal support. Nate was an incredible ninja. He made the first half of the course look easy and he didn’t suffer the slightest hesitation with the second half. Nate went on to become the first finisher of the night. He completed with an amazing time and now it’s his time to beat.

Next up was Eric Middleton. He was known as the Big Ninja because every year he brings with him critters that he claims are edible and that the hosts have to taste if he makes it to the end. But things were different tonight. Eric had the hosts tasting his critter edibles each time he completed an obstacle and they had plenty to choose from. There was big sushi, fried spider, and there were also bug cookies. There was a little of everything. The hosts were tasting plenty of dishes and some of them were better than others. They especially the grasshopper jollof rice. They also enjoyed bee bread. It was made with bee pollen and honey and it was a tasty dessert. Eric made it all the way to the Spider Trap where he became the second finisher of the night. And you know what that means.

The hosts literally had to taste everything that Eric cooked for them and they enjoyed it. Next up was Heather Weissinger. She was a doctor who puts in pacemakers and she was also the third member of the Power of Towers. She was a fellow firefighter. She’s dating Dan and Dan cheered her on from the sidelines as she made it through the course. She eventually fell on Drop Zone. She too will have to wait and see if she made it far enough fast enough to make it to the next round. Next up was Kai Beckstrand. He competed with his father this season and he couldn’t wait to follow in his father’s footsteps. Kai wanted to be a firefighter like his dad. His father is his idol and he became a fan of the show after watching his father compete when he was little.

His father competed first. Only he fell on Drop Zone and so Kai instantly was doing better after he passed that obstacle. Kai looked like he was struggling on the Dungeon but he held on and he made it to the final obstacle where he pressed a buzzer. Kai was the youngest to ever hit a Semifinals buzzer and he made his father cry with pride. During the commercial break, there were several ninjas who had their run and some of them even pressed a buzzer and so luck was in the air. The next person to be highlighted was Cal Plohoros. He was a teenager and he competed in “American Ninja Warrior Juniors”. This was his first year on the adult course and he was doing well. He hit a buzzer during Qualifiers. And now everyone was hoping he would hit a buzzer tonight.

Cal was doing well until the eighth obstacle. He fell on it and now he has to wait and see if he made it far enough fast enough to make it to the next round. Next up was Austin Gray. He was another young ninja who was known for going fast and he was also wearing a shirt that said: “share your spare”. It was about kidney donation. There are a bunch of people on a waitlist for a new kidney and so Austin wears his shirts to encourage people to donate theirs. He encouraged a young woman recently to donate to her father. He also received plenty of messages from people offering to donate one of their kidneys to someone in need and so he was doing wonderful work. And he did amazing on the obstacle course because he finished with the fastest time.

Austin’s time was the one to beat. Next up were the TikTokers who fell on the second obstacle and the first obstacle. Then there was Flip Rodriguez. He ran the course and he fell on the eighth obstacle. He too will have to wait and see to find out if he made it to the next round. Next up was Joe Brown. He trains with a lot of Chicago Ninjas. He’s also been a huge fan of the show ever since he was a kid and so now he’s competing. Joe also known as Jumping Joe was doing well until the eighth obstacle. He fell and now he has to wait and see in order to know whether he went far enough fast enough to qualify for the next round. Next up was Ethan Swanson. The eight-time veteran was going for speed and unfortunately, he fell on the eighth obstacle. And so there is an issue with going too fast.

Next up Jake Murray. He was known for his speed and he lived up to his reputation. He raced through the course. He stumbled several times but just managed to hold on and he ended up finishing the course with the fastest time to beat. Next Jesse “flex” Labreck. She’s hit the most buzzers in the women’s division and she was ready to hit another one tonight. Jesse sped through the course. She had a slight stumble on the balancing act and managed to hold on. Jesse made it to the second half with no other problems. She made it to split decision and she chose the Dungeon. Jesse almost stumbles on the Dungeon. It was clear that she was tiring out but she held on and she went on to become the first female finisher of the night.

Jesse was also the first woman to hit a semifinals buzzer all season. She was also the last person to have her run and so the night ended with a high. Up next was the Power Tower. The two with the fastest time got to compete for Safety Pass and that grants the holder a do-over in the next round. It was Jake Murray against Austin Gray and unfortunately Jake fell and so Austin won the Safety Pass.