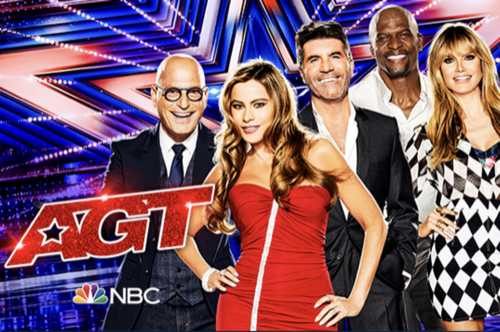 Tonight on NBC America’s Got Talent begins with an all-new Tuesday, June 1, 2021, episode and we have your America’s Got Talent recap below! On tonight’s AGT season 16 episode 1 “Auditions 1″, as per the NBC synopsis, “Simon Cowell, Heidi Klum, Howie Mandel, Sofia Vergara and host Terry Crews return; variety acts and contestants of all ages audition for the chance to win $1 million; the golden buzzer allows lucky acts the chance to go directly to the live shows.”

In tonight’s America’s Got Talent premiere episode, the episode begins with host Terry Crews who is installing the golden buzzer. AGT season 16 begins. The judges are welcomed to the stage; Heidi Klum, Howie Mandel, Sofia Vergara, and the triumphant return of Simon Cowell, who looks about 50 pounds less than he was the last time we got to see him on AGT. The gang is back together, Simon says he misses everyone and is happy to be back on the show, and for the first time ever, he shows up in white shorts. Terry leaves the stage to do a quick outfit change.

The first act is The Canine Stars, they are a dog act. The group trains rescue dogs to perform.

Judges’ Comments: Howie: “This is the best animal act that I have ever seen.” Heidi: “The concept is genius, so many great bits in there, it was perfect.” Sofia: “It was perfect, there is nothing bad to say, it was creative, so much fun and the girl who played me did a great accent.”

Peter Rosalita is a singer, he looks about 8 years old. He sings, “All By Myself.”

Judges; Comments: Sofia: “You are so adorable, we love you. I think America is going to love you.” Howie: “You are amazing and you are so cute, like even when you talk to us. I predict that you are going to go far in this competition.” Heidi: “I think it was incredible. Mariah better watches out.” Simon: “That was an incredible audition. There were parts that literally gave me goosebumps. You have an amazing voice, an amazing personality, amazing energy. Everyone is going to fall in love with you after this audition.”

Brian Pankey is a juggler and he has been doing it for thirty years, in fact, he has performed at Madison Square Gardens and describes himself as a celebrity juggler. He has also performed on Jimmy Fallon, Jimmy Kimmel, and The Gong Show.

Judges’ Comments: Simon: “It wasn’t enough for me I have to say no.” Heidi: “It was a little amateur. You were sweet, and but it wasn’t that great.” Sofia: “I do think that you do deserve an opportunity to show us wrong, so for me, it is a yes.”

Simon hits the red X and he doesn’t make it through.

Elektro Botz are hip hop dancers. They are a group of three men who performed at the Utah Jazz halftime show.

Judges’ Comments: Sofia: “That was a kind of fun.” Howie: “You seem like a high school talent show to me.” Heidi: “I think it is great that you guys are doing this as a hobby, you guys are not professional dancers.” Simon: “It was ok, but I have to be honest with you, I wasn’t blown away.”

Simon hits the red X and they don’t make it through.

Aiden Bryant is a 16-year-old Aerialist, he is completely self-taught from YouTube, he learned most of his moves from a Pink video.

Judges’ Comments: Heidi: “It is incredible, I can’t believe that you just learned how to do this in two years. You have beautiful poise and elegance, and it is so fast and I am so impressed.” Sofia: “This looks like something that you have been doing for generations in your family. It is amazing, I couldn’t do that in two years.” Howie: “I imagine myself as a parent, walking into my room and all my sheets are gone, my son is spinning in the tree with all my sheets. There is a great message here, just go for it. You should be very proud of yourself young man.” Simon: “I thought it was a ridiculously good audition. Honestly, it was just fantastic. This is exactly what we are looking for on this show.”

Judges’ Comments: Sofia: “I don’t know. Is it really hard? (Sofia goes on stage to crack the last walnut with her butt and she can’t do it, she says it hurts and is impossible)” Simon: “I want to see Mr. Cherry do more things with his nuts moving forward, so I am going to say yes.” Howie: “Congratulations on the world record but it doesn’t seem like much, you are just sitting on nuts, for me, it is a no.” Heidi: “I liked it, but I didn’t like it that much. I have seen it and don’t have to see it again.”

They don’t make it through.

Northwell Nurse Choir, a group of singing nurses who went through a lot during the pandemic, and no matter what, they lift people’s spirits.

Judges’ Comments: Simon: “We need you, the world needs you. It’s going to touch a lot of people, I am going to remember this audition.” Howie: “Amazing. One word comes to mind and it is heroic. What a perfect song, Stand By Me. (Howie gets up and hits the golden buzzer) ” Sofia: “It was beautiful, heartfelt, the way you were moving around, it was dynamic, I loved it. It was perfection.” Heidi: “I had chills when you were all singing, it was beautiful to watch, especially the words to the song, that we all have to lean on each other, I loved it.”

Golden Buzzer winner: They advance to the live shows in Hollywood.

Katie Kusiciel is a comedian is dressed as a Ninja Warrior and says she Jello wrestles.

She gets four red X’s and doesn’t make it through.

Keith Apicary is a comedian and gamer who is 35 and lives with his mom. Ever since he played his first video game he was hooked, and that is when he started dancing.

Judges’ Comments: Simon: “I have to be honest with you, based on the whole talk before I thought this is going to be awful. And then, I just loved every second of it. I thought you were amazing. I would rather watch you than the ballet.” Sofia: “It was so unexpected and that is what I love about this show. I loved it.” Heidi: “You did the worm, you did something that I don’t even know.” Howie: “You are a surprise.”

(Gerald) Judges’ Comments: Sofia: “That was a lot of fun, I really enjoyed it. I think you were adorable.” Howie: “From the moment you walked out on here you were really likable, and your timing was good your stage presence. But, I didn’t love the material as much as I love you.” Heidi: “I loved the material, it is because I have two boys and two girls, so I get what you were saying.” Simon: “It started off well but it didn’t have that dynamic end. However, I was laughing and that is what this is all about.”

(Lil Hunter) Judges’ Comments: Sofia: “You are the most adorable thing that I have seen in a long time. You are fantastic and your comedic timing is unbelievable.” Howie: “You are showing such strength beyond your years, you are a star.” Heidi: “I can’t wait for you to be in this competition and go head to head with your daddy. That is going to be a lot of fun to watch.” Simon: “I mean, I was really taken aback you are the same age as my son. You got a fantastic opportunity here, America is going to fall in love with you.

1achord is a singing trio who met a few months ago.

Judges’ Comments: Heidi: “I have a feeling this the beginning of an amazing journey for the three of you.” Howie: “I thought you sounded like so much more than what you are. Your harmonies are so powerful and so right on. I have never been to church, but I feel like I just did.” Sofia: “Imagine when you are really working together, you are like angels.” Simon: “I kind of felt that I was walking into heaven for a moment. You found each other, without overthinking and it simply worked. It was perfect.”

Dustin Tavella is a magician from Virginia Beach

Judges’ Comments: Howie: “It was all-encompassing; emotion, inspiration, magic, you checked every box.” Heidi: “I am speechless, I loved it.” Sofia: “I was mesmerized, you deserve to be here.” Simon: “Anyone that doesn’t believe in magic, hello. Everything was perfect and magical, my mind is blown.”

Sethward is an animal impersonator and this is his third time being on AGT. Simon loves him, so he is back.

A red X from Heidi and Simon, he is not going through.