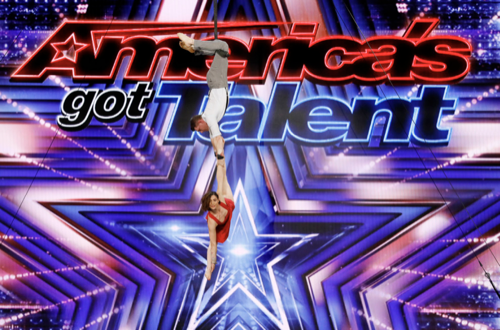 Tonight on NBC America’s Got Talent begins with an all-new Tuesday, August 10, 2021, episode and we have your America’s Got Talent recap below! On tonight’s AGT season 16 episode 9 “Quarterfinals 1″, as per the NBC synopsis, “Twelve performers take the stage live from the Dolby Theatre in Hollywood as judging is turned over to the American viewing audience.

In tonight’s America’s Got Talent episode, the episode begins with Terry Crews telling viewers that for the show just got tougher because they have to perform live to win America’s votes and win the one million dollars with a headling show in Las Vegas. Back tonight are our AGT judges, Simon Cowell, Heidi Klum, Howie Mandel and Sofia Vergara. Out of the ten acts who will perform tonight, only seven will make it through.

The first act tonight is The Canine Stars and they are impersonating the judges. The dogs have gone from rescues with sad stories to rock stars flying by private jet.

Judge’s Comments: Howie: “This is exactly what we asked for, you deserve to be here, you are on the live shows so you want to step it up. I believe you stepped it up, what a way to open the show.” Heidi: “From dogs to divas in no time, private jet, I don’t even do that. You guys were amazing and extra special, I love you guys.” Sofia: “Well I think what a way to open the show tonight, you guys are amazing. I really think this is a unique dog show, I am proud of you guys.” Simon: “I know what Howie meant, you have to step the act up, I thought the first audition was great, this was better. I always knew one day I would be replaced by a dog.”

Peter Rosalita is back to sing “I Have Nothing,” by Whitney Houston.

Judge’s Comments: Heidi: “You are amazing, absolutely amazing. You make me so happy when I sit here hearing you sing. You are so dapper and I was the biggest fan of Whitney Houston and you did her proud. Good for you.” Sofia: “I cannot believe that that voice is coming out of you, you command the stage and it is breathtaking.” Simon: Peter, it is so nerve-racking to walk on that stage, you are gutsy and you have determination. When you go to the next round, choose a song next time that doesn’t sound like your mom chooses it. I want to hear something young next time but that was fantastic.” Howie: “You are great, adorable, I love your style. I love you.”

Judge’s Comments: Sofia: “You guys are getting better and better, just spectacular and I have a hard time because I want to focus on each one of you and I can’t get enough of you.” Simon: “Your talent is indisputable, you are so good. I love that you are interesting, you have personality, we are going to remember you. I think you are giving yourself a shot at the finals.” Howie: “There is an old adage in this business, don’t work with animals and children, and that is all we have been doing tonight. The children are so amazing, so much energy, so fierce, America is going to have a tough time.” Heidi: “This was everything, everything is bigger in Texas and they are absolutely right. Bigger talent, bigger energy, bigger hair, bigger sparkle. You guys are fantastic.”

Madilyn Bailey is originally from a small town in Wisconsin. When she was sixteen she posted her first video online and it launched her career. Tonight she is singing a cover song, Sia’s “Titanium.”

Judge’s Comments: Simon: “I thought that was absolutely brilliant. I know you have had a tough time online, but this is the best thing you could have done for the doubters out there. That sounded like a record, you controlled the vocal, it was outstanding, I loved it.” Howie: “I don’t disagree that was a great song, you have an amazing voice. I respond more to the quirkiness of the internet regarding the mean tweets last time, that makes you stand out.” Heidi: “I think you look beautiful and sound pretty, I also thought you got to the live shows because of your quirkiness and was surprised that you did a cover.”

Kabir Singh is a comedian inspired by his Indian heritage. He credits his mother’s love, support prayers for being on AGT. His mom is loving his fame, and he says it is honor to be on the stage.

Judge’s Comments: Howie: “You are so authentic, real, relatable, loveable, you are a comic star. I and your mother, America are so proud of you.” Heidi: “I love you too, it is relatable what you talk about. I was there with you, you made me laugh.” Sofia: “I am so happy you are here and I had the best time, like the last time. You are getting better, I love your relationship with your mom.” Simon: “You are very likable Kabir.”

Dustin Tavella is a magician and he brings Howie on the stage to participate in his act.

Judge’s Comments: Heidi: “First of all, your kids have the coolest dad, hands down. How did you do that? Maybe it’s your story, you make me feel warm and fuzzy inside, well done. I wish there was more of you.” Sofia: “I feel that you have your own special kind of magic, you are a storyteller. It is very different and you are at the right place.” Simon: “Even with a useless assistant you did amazing, this is what makes you unique, you tell stories every time you do your magic and that is why people are going to talk about you and you have a real good shot at making it to the finals.”

Trio 1aChord are best friends, they found each other and it simply worked. They all come from various church backgrounds. They are performing a version of “Everybody Hurts” by R.E.M.

Judge’s Comments: Sofia: “You guys are going to do so well. I loved it, I enjoyed it.” Simon: “I think this has been the best performance of the night so far. You guys are just magic, your harmonies, the leads, everything. I even liked the backing track, you are so talented, just amazing.” Howie: “I can’t believe you guys just met this year. That is contemporary gospel, you filled a lane that doesn’t exist right now. I would buy a ticket to your concert.” Heidi: “I can really tell you guys were church boys because it was heavenly.”

Gina Brillon is another comedian, she was actually married at a comedy club. Tonight her act is focused on growing up in the Bronx.

Judge’s Comments: Simon: “You are very funny, but I would say I sense a lot of nerves with you tonight. I adore you, I think you are very funny but I didn’t think it was as good as the first audition.” Howie: “Humour is subjective, I thought it was good, you put in the work and I think it paid off.” Heidi: “I love you, I want you and Sofia to do Latina buddy comedy. You made me laugh.” Sofia: “Heidi was laughing and she doesn’t laugh that much. I was having the best time. Everything you said was true, I love you>”

Gangstagrass comes from all parts of America, the band mixes bluegrass and hip hop music.

Judge’s Comments: Howie: “This is what America needs, I think the idea is actually much better than the music. I love what you want to do but the song was underwhelming.” Heidi: “I disagree, I felt this was a lot of fun. Why are you being grumpy Howie?” Sofia: “It was amazing, it was unique, I have never heard anything like that, you are in the right place and I don’t care what Howie says.” Simon: “This wasn’t a moment in my opinion, I understand where Howie is coming from. You are likable, but I don’t think the song was good enough.”

Sethward is back on stage and this time, he is a peacock. Simon gives him a red X buzzer, then Sethward says he is going to fly. There are fireworks everywhere, he falls down the stairs, he is on fire, but he doesn’t fly. Some men come on stage and put a curtain in front of Sethward, then he has ropes attached to the costume that pulls him up, I guess he is flying.

Judge’s Comments: Sofia: “No, no. It is making me very nervous.” Howie: “It is amazing how he can make nothing out of so much, for me, this is the ultimate promo on peacock.” Heidi: “I was laughing, but I am not sure at what. The audience is confused too. But I am happy you made it to the live shows to live out your dream.” Simon: “It was absolutely bloody awful. We can now officially call the show America does not have talent.”

This next act is terrifying, it is Matt Johnson with his danger act. He is chained and padlocked to a door, by the neck, by the chest, and by the waist. He will use a single lock pick to make his escape. This is lethal, there is a bucket of sand, attached to a rope, attached to a chain saw. He has to pick the lock and make his escape before the chain saw goes through the middle of his skull.

Judge’s Comments: Simon: “That was very scary. I did think the noises you were making throughout the act were a little over the top, a bit hammy for me.” Sofia: “I am glad you are ok because I am not, it was horrific.” Howie: “He has taught us that if you don’t succeed at killing yourself, try, try again. You failed and thank God you did.” Heidi: “It did not make me feel warm and fuzzy inside. I don’t know why we keep celebrating you trying to kill yourself.”

The last act for the night is Jimmie Herrod, Sofia’s golden buzzer, she says he gave her goosebumps. Tonight he is singing, “Pure Imagination” by Gene Wilder.

Judge’s Comments: Sofia: “Bravo Jimmie, you look like a movie star. That was spectacular, I have no words to explain how you make me feel. You are sexy.” Simon: “You are one of those singers that you don’t forget, we are never going to forget your voice. You are an artist that should be headed straight to Broadway.” Heidi: “You are the million-dollar act, bravo. Perfection.” Howie: “If America decides a singer is going to win this year, you are the one to beat. That was perfection.”