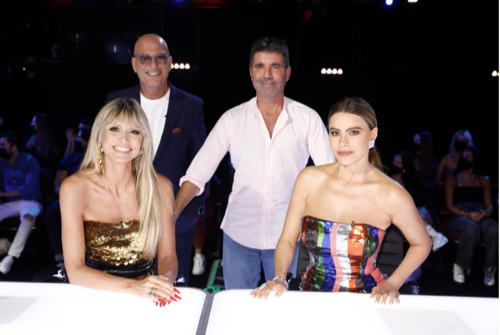 Tonight on NBC America’s Got Talent begins with an all-new Tuesday, August 24, 2021, episode and we have your America’s Got Talent recap below! On tonight’s AGT season 16 episode 13 “Quarterfinals Results 3″″, as per the NBC synopsis, “Twelve performers take the stage live from the Dolby Theatre in Hollywood as judging is turned over to the American viewing audience.

In tonight’s America’s Got Talent episode, it’s Night Three of the Quarterfinals! Twelve acts were performing tonight and voting was open. But there was one drawback. Not everyone was going to make it to the next round and so everyone had to perform for their life. This meant some took risks. This also meant some played it safe. There were only going to be seven acts to survive and seven out of twelve wasn’t much. Not in the grand scheme of things. The first act up was coming all the way from Japan. UniCircle Flow was a group of four young women who did amazing things with the unicycle and tonight they upped the ante by having twelve instead of four performing onstage. The additional crew made what they did look epic and the crowd sure enjoyed it.

But what did the judges think? The judges seemed to enjoy the show and they didn’t mind the mistakes. There was some wobbling that came with a live show. Not everyone was on point and still, the judges enjoyed it. They had never seen anything like this. UniCircle Flow provided pure entertainment. They would also be bringing something fresh to Las Vegas if they won and so for that alone they deserved votes. Next up was ANICA. She’s been keeping busy with her other career as a realtor and it turns out she’s been getting a lot of traffic since being on the show. People stop by nowadays just to see her. They loved watching her on the show and she was developing a fan base. The only one who wasn’t a fan was Simon.

Simon didn’t really “feel” ANICA. He passed during her tryouts and not much has changed since then. ANICA performed “River” by Bishop Briggs tonight. She rocked out to the song and the audience was feeling. Everyone but Simon gave her a standing ovation. It was just him that was the sourpuss. Simon later said of her performance that it wasn’t for him and that’s pretty much how he is mot of the time. Next up was Léa Kyle. She was Heidi’s Golden Buzzer. Heidi loves magic and she loves fashion and Léa Kyle combines them both. Heidi has been keeping in touch with her. She knows that Léa was making all of her outfits tonight. She couldn’t wait to see it and it turned out to be a lot of fun.

Heidi loved it. Sofia loved it. Howie enjoyed it. It was just Simon who wasn’t impressed. He said her audition was better than tonight’s performance and so hopefully America won’t think the same. Next up was the Curtis Family C-Notes. They were a family band and their afros definitely reminded many of the Jackson Five. To them, disco never died. The family performed “Love Train” by the O’Jays. They gave a good performance but it wasn’t great or one of kind. It was more familiar and welcoming. Like a wedding band. It turns out Howie and Simon thought the same because they weren’t blown away and the band sounded like they could be at any wedding playing in the background.

Even Sofia wondered where they could go from here. The band was nice and everyone liked them but liking wasn’t enough to win and so maybe next time they shouldn’t let mom and dad choose the song. Maybe next time they could choose a song a little more current or a new song with an old vibe. There were a lot of maybes and ultimately there might not be the next time. Next up was Keith Apicary. Keith lives with his parents. He loves video games and he was still riding high off the comments from last time. The judges had loved his performance. Simon was especially friendly and that was weird because Keith is a dancer. Not a trained dancer. Not Contemporary or ballet. He just boogies.

Keith also released streamers. He did a false act with a fake guillotine and then he did his dancing routine. This time it didn’t move Simon. Simon called it horrible. He said it wasn’t worth the prize or a Las Vegas act. The other judges seemed to like the performance. They said Keith inspired joy and so they wanted to see more from him. next up was Michael Winslow. He was a former actor and he was known for doing amazing voices. He had to walk away from the fame for his kids. His kids are all grown now. He’s free to pursue the career he gave up and so AGT was his big comeback. Michael could basically repeat any noise on the face of the earth. He also tied in with a comedy routine and he was a great comic.

Michael knew how to energize the crowd. He knew how to get them laughing and the same went for the judges. The judges like Michael. They want him to stay in the competition and they asked America to vote for him. Next up was Brooke Simpson. She lives in an area populated by indigenous people also known as actual natives and so Brooke was asked a lot growing up about her past. She didn’t mind the questions. She loved explaining where she’s from because she was proud of it and so she couldn’t wait to people about her people, her culture, and her family. Brooke has never hidden anything about her life. She was proud and she was making the community proud by her performances on the show.

Brooke looked great tonight. She sounded great. The song was hard to place but everyone loved it and even Simon thought tonight was better than her audition. Everyone loved Brooke and hopefully America votes to save her. Next up was Rialcris. They grew up in the circus because their parents split up and their mother ran off to the circus with the kids and so that’s where they learned their talent. The brothers were originally from Colombia. They were a strong man group and they did amazing things. They also took off their shirts which was definitely a crowd-pleaser. The judges loved it. Sofia was their hugest fan. Simon also loved it because he said they really put in the work tonight.

Next up was ChapKidz. They were the younger generation of a dance group that auditioned back in 2010 and now it’s the kids’ turn. They wanted to go further than the adult group had. They wanted to become the first dance group to win AGT and they were on the way with their dance routine tonight. They were amazing. They were all in sync and they used the whole stage. They 360 their dance routine. They were so good that all the judges and that included Simon was on their side. Simon said they were the best routine tonight. He said they could win this whole thing and the other judges concurred. Howie used the word “amazing”. Sofia and Heidi were blown away. And everyone pretty much thought they were a shoo-in for the next round.

But America still has to vote. They have until tomorrow to save their favorite routine and they were plenty of great choices. Next up was Storm Large. She was voted in as the Wild Card and so she received another chance of breaking into the business. Storm has tried to break into the business for more than twenty years. She’s come close but never gotten it and now this show is her chance. Her chance to finally make it as a singer. Storm chose the song “Take On Me” by a-ha. She truly gave the song her all and so it was disappointing that Simon hadn’t enjoyed it. Simon said the special rawness was gone and Howie felt the same. Something was missing from her performance. It could have been the song she chose or maybe it was nerves. She was signing for her dream job and unfortunately, she wasn’t at her best.

Next up was Klek Entos. He wears a mask to cover his face and he wears gloves to cover his head. He even wears goggles to hide his eyes. Klek was scary. His routine was slow and intense and Simon pressed his reject button during it because he said it was dragging too long. Howie disagreed. He called what he saw as a horror film and magic all rolled into one. The other judges had enjoyed it. It was just Simon who said it was lagging. Next up was World Taekwondo Demo. Team. They were Terry’s Golden Buzzer. They were an amazing group and their routine tonight had everyone on their feet. The judges loved the performance. Heidi called it beautiful controlled chaos and Howie said it was like a Marvel movie in real life. Howie also said it was the best performance of the night and so hopefully America votes.