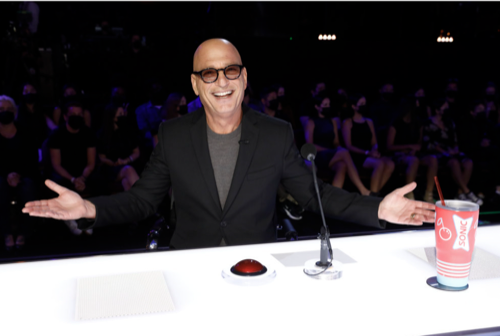 Tonight on NBC America’s Got Talent begins with an all-new Tuesday, August 31, 2021, episode and we have your America’s Got Talent recap below! On tonight’s AGT season 16 episode 15 “Semi-Finals 1″, as per the NBC synopsis, “Live from the Dolby Theatre in Hollywood, 11 semi-finalists perform for a chance to win $1 million and be named the most talented act in America. Starring creator and executive producer Simon Cowell, alongside celebrity judges Heidi Klum, Howie Mandel, and Sofia Vergara.”

In tonight’s America’s Got Talent episode, it’s Night One of the Semifinals! The show was live from Hollywood and host Terry Crews had the crowd pumped. He reminded everyone that a million dollars were on the line. Alongside a headline show in Las Vegas and so the acts tonight had to be perfect. There was no longer any room for flaws. Up first was Peter Rosalita.

Everyone enjoyed it. None talked about his need to start over and so that is good news but the judges weren’t the ones in charge now. America was. America was voting to save their favorite acts and they can still vote for Peter because he was talented only there was a chance they might choose someone else. Next up was Michael Winslow. He changed up his routine where he did something more interactive and it was engaging.

The crowd laughed. They loved his impersonations and they also got to get involved as well. This was perhaps Michael’s best performance to date. The judges surely ate it up and the crowd couldn’t stop laughing. They all love Michael. Michael now just has to keep that momentum.

Next up was Beyond Belief Dance Company. They were the Wild Card choice that the judges agreed on and tonight they stepped things up. They put on a big production. They brought in props. They also all looked great. Their clothes were fierce. They also had hair and makeup done that looked great. All the girls reminded the judges why they chose them.

They were uplifting and fun. They brought a wonderful atmosphere to the show. The judges certainly enjoyed it. The judges told the girls how amazing they were and they also added that America needed to vote for them. America shouldn’t let the girls and their wonderful talent slip through their fingers again. Their performance tonight was better than their audition. And in the end, they showed improvement and that’s what all the acts should be doing.

Next up was Aidan Bryant. He started this season full of nerves. He hadn’t thought he was good enough for the show and so each time he received positive feedback it had been a shock. Aidan came to appreciate all the kind words. He also came to see himself as others viewed him. As a talented young man with a bright future.

Aidan comes from a small town and he always stood out because he hadn’t been interested in things other kids his age were interested in. Aidan didn’t know it back then but now he realizes he found a place for himself and he’s great at it. Aidan gave a wonderful performance tonight. He looked great and was great. The judges enjoyed it. The crowd also enjoyed it and hopefully, that translates into votes.

Next up was Tory Vagasy. She was the singer that loved show tunes and she had a hater. Howie hadn’t appreciated her act earlier. He thought she wouldn’t last against the other singers and so that sparked something in Tory because she’s been told that before. Tory once auditioned with her twin sister for a play about twin sisters and they cast her sister but chose someone else to play the twin.

Tory had been so despondent at the time. It wasn’t until later that the criticisms sparked a fire in her. Tory performed a song “the Lion King” soundtrack and it sounded great. It’s just that it was a little too safe for some of the judges. Simon said he would have preferred it if she had taken some kind of risk and Howie agreed with him. Howie said Tory is a great singer. She just wasn’t a breakout star and that’s what they’re looking for at this point.

Next up World Taekwondo Demo. Team. They were a Golden Buzzer this season and they earned it with their positive message. They got into underdeveloped communities where they help kids gain confidence and strength through the power of taekwondo. Their first performance had been amazing. The second performance hadn’t been great as the first but that wasn’t an issue tonight because they were back on form.

They had been wonderful to watch. Even Simon was a fan and it was truly hard to get a kind word or any sense of approval from the man. Simon said their performance tonight was their best to date. The other judges also loved it as well and so now it’s up to America to decide if they loved it.

Next up Madilyn Bailey. She performed a beautiful uplifting song that she wrote herself and she also played the piano as well. Madilyn took risks. She was known for taking risks and surprisingly she played it slightly safe tonight. Or at least that’s what Howie complained about. Howie said she was in the same lane as Tory and he claimed that she didn’t do anything out of the ordinary.

It wasn’t like her first performance when she was singing those mean tweets. Howie told her that he wanted her to go back to what made her great while the other judges disagreed. The other judges loved Madilyn’s performance tonight. They said she sang from the heart and that was true to herself. Madilyn’s song was something she wrote when her grandmother died from cancer. It was from the heart and everyone, besides Howie, enjoyed it.

Next up was Dustin Tavella. The family man spoke about his wife and how she changed his life. When they were dating, she would remind him every day of the reason why she fell in love with him. She just knew that he needed to hear it and it gave him the confidence boost he needed to pursue his dream. Dustin was a magician. He tied that in with his storyteller’s past and it worked to great effect. The judges loved it. The audience loved it. Simon also said that he saw Dustin in the Finals.

America just needed to vote for him and everything would be set. Next up was Korean Soul. The acapella group was bringing back soul and they took a gamble tonight. They performed “You Say”. To the untrained ear, they sounded amazing. They sounded like they always do and then to the judges they sounded like something else.

Simon and Howie didn’t like tonight’s performance. They’ve heard better and they claimed that tonight’s performance wasn’t as good as their previous performances. Heidi and Sofia disagreed. They loved the group. They thought they sounded wonderful and they argued with their fellow judges. Only, the ultimate test on how well Korean Soul did will be the votes. America will either vote for them or not. Next up is Gina Brillon.

She was a comedienne. She was super funny and Howie was a fan of hers. He’s seen her around town. He’s seen her getting better over time and it finally was paying off because now Gina was on AGT. Gina gave another stellar performance. She was doing great tonight and the judges were all glad to see her. They thought America would vote to save her and so they were counting on America to do the right thing.

Next up was the final act of the night. Jimmie Herrod was Sofia’s Golden Buzzer and his voice was unique. It made him stand out among all the other singers. Jimmie gave a masterclass with his performance tonight and Simon said as much. Jimmie has the best voice in the competition. He deserved to make it to the next round and so America has to vote.