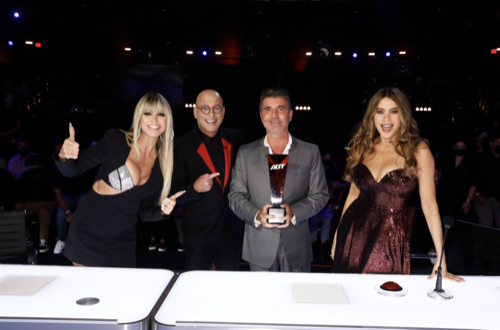 Tonight on NBC America’s Got Talent begins with an all-new Wednesday, September 14, 2021, episode and we have your America’s Got Talent recap below! On tonight’s AGT season 16 episode 19 “Semi-Finals Results 2″, as per the NBC synopsis, “The top 10 acts perform one last time from The Dolby Theatre in Hollywood for their chance to win $1 million and be named the most talented act in America.”

In tonight’s America’s Got Talent episode, it’s the Finale! The end is almost in sight and the winner will soon be revealed. Tonight was the night for all the acts to get it right and up first was Jimmie Herrod. Jimmie was a singer. He had a unique voice and there had also been several close calls in possibly losing him. But Jimmie stayed in the game. He never gave up and he opened tonight with a truly beautiful rendition of “What A Wonderful World”.

Jimmie’s true talent is that he can make any song sound like it was written just for him. He was a class act and he made the classics his own but the night was far from over and there were more performances. The next act was Léa Kyle. She was both magician and a fashion designer. She performs in an act in which she can change clothes in under a second and it appears like it was literally brought by magic.

Léa isn’t an American although she’s always dreamed of performing on an American stage. She put on a fashion show tonight and it is still a mystery how she’s able to do it. She was that great of a magician. Besides performances, the show also took a look back. They looked at all the performances during the auditions and some were good while others were just super bad.

There was the guy who dressed up like an animal and came with his own weird sense of humor. Then there was the dancer who couldn’t dance. There was a long line of acts that didn’t make it through to the Finale much less the second round and it was now funny to watch it back. The next act was Victory Brinker. She was an opera singer and she was just plain adorable.

The little girl was talented. She showed off her amazing voice and she was just nine years old. She performed “Ava Maria”. Her performance tonight was better than her audition. Simon also said it was in a field of its own and so Victory could possibly win this thing. People just have to vote for the most talented of the night. The next act was Gina Brillon.

She was a comedienne and she always leaving everyone laughing. Gina wanted to be the first comic to win AGT. She’s worked hard for it and she’s been one of the undiscovered talents for a while. Gina has been performing since she was old enough to do so. She’s showed up at the clubs and she does the work. She inherited an incredible work ethic from her parents who while not having a lot of money had always made sure there was food on the table.

Gina was a mother herself now. She has a young son whose often seen hanging out backstage and, while he was too young to understand his mother’s talent, he would have been laughing too if he had seen it. Gina was on fire tonight. She wanted to make history for comics and Latinas and who knows? Maybe she might. Next up was World Taekwondo Demo. Team.

They were Terry’s golden buzzer and they were recently saved from elimination by the judges. The judges saw the potential in them. They also believed in the team’s message. The team not only teaches Taekwondo to kids but they go into underdeveloped countries to assist people who may never have thought they were capable of more. And they also looked great as they were performing because tonight they had all the appeal of a big Las Vegas show.

Which is what they were competing for. The act tonight was competing for a chance at a Las Vegas show and the next act to perform was Aidan Bryant. He was an Aerialist. He performed amazing feats up in the air and he was just sixteen years old. Aidan had developed his talent after getting his grandmother’s queen-size bed cover one day. Before then, he was a little lost. He didn’t know where he fit in and so now he’s found a place for himself. His act carries danger because of course, Aidan can fall.

He wasn’t harnessed or anything and that meant he was taking a risk every time he went up in the air but he looked good and three out of four judges were huge fans. The only one who was on the outs was Howie. Howie didn’t think tonight’s performance was better than the previous one. He also tried to say so when the other judges cut him off and said thank god it was America that was voting.

Next up Brooke Simpson. She was a proud Indigenous woman and she wasn’t afraid to show it. Many others tuned in to watch the singer perform. She was another one who made any song sound like her ow and tonight she performed Bishop Briggs’s “White Flag”. She gave a concert-worthy performance. The audience was on its feet for most of the song and the judges loved it as well.

They later asked Brooke why she performs. Why did she stay in the competition? Her answer. She said she does it for her tribe and to show them that anything is possible. If she could be on that stage, then so could any one of them as well. The next act to perform is Dustin Tavella. He was a magician and his story was an important one. Dustin has been through some tough times. He always says the one thing to turn it around was his wife.

His wife entering his life was the moment it all changed. Dustin fell in love instantly and, thankfully for him, she reciprocated. They fell in love, got married, and they started a family. It came with bumps in the road but life is pretty good right now and it’s just gotten better with the show. Dustin was an amazing magician and he had a superfan in Simon. Simon gave Dustin a standing ovation.

He was standing so long that it forced the other judges into standing and so Dustin’s chances at being the final two would increase if Simon. But once again, it was up to America. The next act to perform was Josh Blue. The comedian was a terrific comic and he left everyone in stitches because Josh had this amazing ability to be able to laugh at himself.

Josh has a disability that is quite noticeable. He instead used that in his skit and just rolled with it. Josh was very funny. He had everyone laughing and that includes the judges who can sometimes be stone-faced. The next and last act of the night belonged to Northwell Nurse Choir. They were Howie’s golden buzzer. They were also real-life nurses who were on the frontlines with the pandemic and who surprisingly still had time to come together to form a choir. They performed “Stand By You” by Rachel Platten. They put on a great show with their uniforms. They also sounded great and if they won they could be the first choir to win AGT. And with their amazing performance, the night came to a close, and hopefully, everyone starts voting.