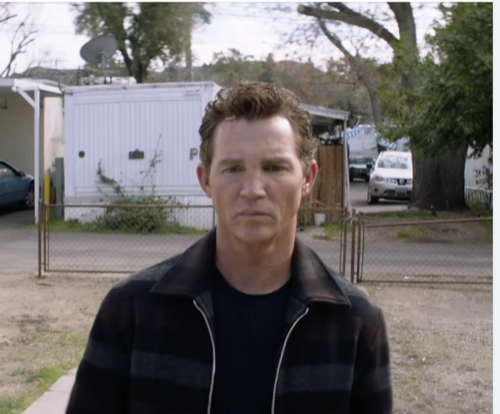 Tonight on TNT Animal Kingdom returns with an all-new Tuesday, July 18, 2021 episode and we have your Animal Kingdom recap below. On tonight’s Animal Kingdom season 5 episode 2  called, “What Remains,” as per the TNT synopsis, “As Pope deals with Smurf’s remains, Craig and Renn balance their old lives with being new parents. J finds a new job through an old contact, and Deran can’t outrun his past with Adrian.”

In tonight’s Animal Kingdom episode, the episode begins with Pope, he is fixing the kitchen cabinets when J walks in and asks him if he is going to change, Pope tells him he can handle it without him. Ken Roberts is ringing at the front gate, he is looking for Angela, he says he is her parole officer. J tells him that he can’t help him. Pope says he will change the locks, Angela has a key.

Pope goes into his mother’s room, then the garage where he opens the safe and takes out his mother’s ashes – then speeds away.

At the lawyer’s office, J, Craig, and Deran are there, she tells them that Smurf was lucid when she drew up the documents. J asks the lawyer what would happen if Pamela Johnson didn’t show up at the probate hearing, she says everything would be passed down to her family, her estate.

Back to young Smurf, she is trying on jewelry, the kids are in the car waiting for her. All of a sudden, Smurf grabs a handful of jewelry and makes a run for it with the kids.

Craig, Deran, and J are sitting outside, Craig doesn’t understand why Smurf did this. J says there is a lot of assets that were not on the list that the lawyer had, they can sell it. Craig says it is a shit show.

Pope brings Smurf’s ashes to Deran and tells him that they need to lay her to rest. Deran asks him what the rush is, they can focus on giving her a loving burial when they figure out how not to find themselves homeless. Pope grabs the ashes and walks past Craig on the way out of the bar. Pope sits in the car with Smurf, he looks up under the sun visor and there is a photo of him when he was younger on the road with Smurf.

J meets with Frankie, he tells her that he needs a fence. She tells him that she has someone she can make an introduction to, she wants 5%.

Deran and Craig are walking down at the harbor, Deran asks him if he knew about the shit that Smurf had off the books, he says no, Deran wants to know why J knew about it and they didn’t. The two find the boat they are looking for, Byte Here & Now, they pull out their guns and put masks on. Inside the boat, there are some guys playing cards and sniffing coke. They hold up the guys, tie them up and grab all the money.

The brothers are disappointed that the guys were playing for one-dollar bills. Deran tells them they suck at being rich. They take what they can, Craig sprinkles cocaine over them, calls for help, and says they have engine trouble, then the brothers take off on a jet ski.

Pope goes to see Seb, tells him he wants to trade in Smurf’s car. Meanwhile, Deran and Craig are back at the bar, Deran says that was a lot of hassle for three hundred dollars.

J shows up at the bar and tells Deran that he thinks he found them a fence through Frankie and she wants 5%, she is the only option right now. Deran says ok, he will tell Craig.

Pope has Smurf’s ashes and stops at a funeral home, he tells the director that his mother bought a plot there. She tells him that they need to set an appointment, she needs a permit. Pope leaves with Smurf’s ashes, she locks the door.

Deran gets paid a visit by Agent Livenwood who tells him that he noticed Adrian on an airport security camera leaving the country and he didn’t care about his white trash family before, but he does not.

J is at the bowling alley when Pete drops by to see him, he tells him that a single-engine plane went down in the mountains with some shit in it, the pilot got busted and wanted to disappear, he helped him. The pilot gave him a transponder, sends a GPS signal. He says he wouldn’t have brought this to Smurf. It’s going to be a couple of days before someone misses it, it’s finders keepers right now.

Young Smurf is at a party with Pam, she does some coke and when Marcus tries to hit on her, she rejects him. He tells her to own it right now because she won’t look like that forever. She tells him that he bores her and pulls out a gun and asks her if she is bored now. She tells him to go ahead shoot her. He puts the gun to her throat, she yells at him to pull the trigger, and Pam breaks it up.

Pope is still with Smurf’s ashes, he is is kneeling down in the grass and starts to pull it out with his hands while he is crying.

J calls Deran and Craig to the house to talk. J tells them about Pete’s offer, but there is a clock on it. Deran asks why Pete won’t do it himself, J says it involves ropes and climbing. Deran says he will run it by Pope, if he is into it, then they will do it, Craig agrees.

Deran returns to the house he shared with Adrian, he grabs a few things, then he lights it on fire. Afterward, he goes to Craig’s house and honks the horn until his brother comes out, he tells him to go surfing with him, the pier lights are on.

Back to young Smurf, she and Pam arrive back at the house, young pope is sitting on the floor watching TV when they come in. Pam tells him if he wants pancakes in the morning, he needs to find a place to lay down. Pam tells Smurf that she was there for business tonight and now they think she is as crazy as them. Pam tells her that the two kids need her to figure things out.

We see Pope, he wakes up beside the pool, he has Smurf’s ashes on him, some in the pool and very little left in the plastic bag.