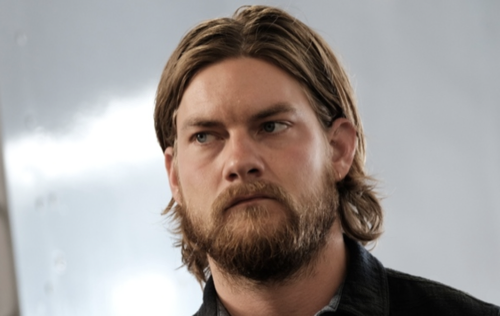 Tonight on TNT Animal Kingdom returns with an all-new Sunday, August 1, 2021 episode and we have your Animal Kingdom recap below. On tonight’s Animal Kingdom season 5 episode 4  called, “Power,” as per the TNT synopsis, “Deran follows up on Smurf’s will and loses patience with J calling the shots; Pope’s mental state is fragile; Craig is forced to deal with being a solo dad.”

In tonight’s Animal Kingdom episode, the episode begins with Deran surfing, he is about to leave when he sees Livengood, the DEA agent, who tells him that someone is sending money to Adrian and asks him if he knows who it is. Deran says he doesn’t know. Before leaving, Livengood says, “your window for playing ball with us is closing, you don’t want to miss your chance.”

Meanwhile, Craig is playing Mr. Mom while Renn is away at her friend’s bachelorette party in Reno. Deran drops by and asks him if he spoke to J yet about the coke in the plane, he says no. Deran tells him that he shouldn’t be keeping it at the house. Craig says J told him that they can hock some of Smurf’s stuff to tide them over, Deran asks him how long he is going to keep listening to J. Then we see Pope, he is in handcuffs and asks the police what he did. Pope says he was just walking around. Chadwick tries not to get Pope taken in, but it doesn’t work.

Deran stops by J’s house, Natalie is there with him but she leaves. Deran asks him if he made the exchange with Pete yet, J says he needs more time and didn’t ask questions. Deran tells him that they better get there money, all of it. J says he is meeting with Pete today. Deran tells him to get dressed, he wants to see what he has been hiding from them.

They head to the bowling alley, J shows Deran around then Deran tells him that he should sell the condo. There is a safe in the backroom, Deran tells him to write the combination down. There is cash, J says it is petty cash for the business, Deran gives him a look, he gives him the cash. Deran says they are going to hide the drugs in the bowling alley, and it’s not a request.

Back in the ’80s the kids catch Young Smurf making out with Jake.

Craig is in a surf shop just after he body checks a guy on an electric scooter on the street. He meets the sales clerk, the brother of Crackhead Dave who gives him some baby advice.

Deran goes to see Pete and tells them that from here on out, he can talk to him. Pete says he keeps it simple, he deals with J and whatever he is trying to do, he is going to have to do it another way.

Pope is in a hospital, he puts on his jacket to leave when Dr. Franklyn walks in. He asks what he is doing there. He gives her his name and asks if he did something. She says he was walking around bleeding, talking to himself, and knocking on random doors. She tells him that the only way he can leave is if she signs a piece of paper she has in her hands, so he is going to have a CT scan and speak to her.

Deran tells Craig that Frankie can move some of their stuff, J has already had a conversation and they have no choice.

Officer Chadwick shows up at the house, J is there, he tells him that Pope is in the hospital and he thought someone should know.

Craig hired the sales clerk to watch the baby so he can get out of the house. Deran is in the bowling alley, he goes through the safe.

Pope is in the hospital being questioned by the doctor, he says he has been feeling this way for a week, he gets confused. He tells her that his mom is dead, recently. She asks what happened, he tells her cancer, it was sudden, the end was quick. He admits that his memory loss started after her death. She says what he is experiencing is because of his mother’s death. She offers to admit him for 24 hours so they can talk again, he says yes.

Craig goes to see Frankie, she says J came to see her. He tells her it’s a shitty deal and he is not going to let her steal his money again. They agree on 2% for anything she moves, he tells her to stay away from J.

Young Smurf invites Manny over, he asks her why he is there. She says she has a job, she made all the plans to get ATMs open by blowing them up, but not setting the money on fire. The plan to steal the ATM goes forward, they tie it to the back of the truck and steal it. They blow up the machine, it worked, the cash comes flying out. Manny and Jake want to leave the state, Young Smurf says Oceanside is home, she wants to stay.

J goes to see Pope in the hospital, asks if he is ok, Pope says he is fine. J closes the curtain and tells him that he heard he could use a ride. Pope gets up to leave with him. J drives Pope to where he left his truck, but it’s not there, it is the house where he used to live with his mom and Julia.

Deran drops by to see Pamela, she tells him to make himself useful and help her with the groceries. Deran tells her that he was hoping they could work something out, the houses, the apartments, everything else is supposed to come to them.

She laughs and says she is supposed to be ten pounds lighter. She says if Smurf put her name on the will she had a reason. She tells her that Smurf created an empire and if she wanted him to have it, she would have given it to him and he is not going to take anything from her, but she might let him earn it. She tells him to get out. She firmly put Deran in his place.

J pays Pete a visit and tells him that he can’t hold on to the product anymore. Pete tells him that Deran was there and now he is asking for an additional 20 percent.

There’s a pool party, Pope, Deran and J are there. Pope goes outside and confronts J, he angrily tells him that he shouldn’t have shot her, he shot her right in front of us.